One of my favorite Hemingway stories is the two part "The Big Two-Hearted River," published in Hemingway's first trade edition book, In Our Time [1925]. The story is of especial interest to sportsmen, as it relates a fishing trip the central character takes on the Upper Peninsula of Michigan shortly after the First World War. It captures in Hemingway's unforgettable style the feelings and sensations--the sheer physical exhilaration--of hiking, eating, wading,--all the simple impressionistic details, with an immediacy and pungency that are unmatched in straight narrative writing. 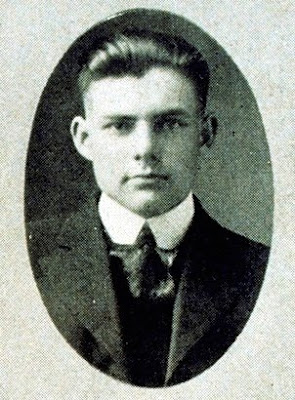 What are the qualities of Hemingway's prose style, where did he derive the special techniques which are the basis of his innovative method? It isn't my purpose here to explicate the thematic meanings of the story, which scholars have been doing relentlessly over the last half-century. Rather, I'm interested in how the prose exemplifies formal discoveries and tricks which stretched and expanded our concepts of composition.
It has frequently been speculated that Hemingway's style is derived from conversations he had with Gertrude Stein, regarding certain aspects of her own work, and also from her and Hemingway's perceptions about Cubism, the brash experimental abstract painting style in vogue at the time. How could writing incorporate the configurations of Cubism into abstract narrative? Let me quote randomly from the 15th paragraph of Part I:
"Then it was sweet fern, growing ankle high, walk through, and clumps of jack pines; a long undulating country with frequent rises and descents, sandy underfoot and the country alive again."
On its face, this is a straightforward sentence, grammatical, and filled with vivid detail characteristic of Hemingway's concentration on concrete objects and impressions. One important aspect of the story is Hemingway's evocation of the burned-over destroyed town of Seney--and the vitality and verdancy of the natural landscape. This contrast is used to symbolize the central character Nick Adams's (Hemingway's stand-in) spiritual wound from his war experiences, and his desire to reawaken and renew his primitivistic regard for nature and solitude. It's a journey of healing.
The clause "walk through" is used as both a modifier and a noun phrase, which interrupts the descriptive flow. The phrase "and the country alive again" differs from the other parts of the sentence in not being descriptive in sequence, but is a commentary--judgmental, moralistic--upon the whole scene. It's a grammatical enjambment set against the ("undulating") flow of description. The rhythm of the prose is an analogue of the progress of the character's movement, through the foliage, thinking as he goes, reflexive, multi-leveled. Hemingway classic insistence on sensory impressions foregrounds the visual and tactile qualities of actual things, and wedges mental iterations and deductions into the structured dimension of the prose: Time, words flowing, mind noting, images coming forward, all fitted tightly into an order that is at once illogical (irrational)--in the traditional sense--but deliberate.
Compare this technique with these random sentences from Stein's Tender Buttons [1914]:
A circle of fine card board and a chance to see a tassel.
*
NOTHING ELEGANT.

A charm a single charm is doubtful. If the red is rose and there is a gate surrounding it, if inside is let in and there places change then certainly something is upright. It is earnest.
*
A RED STAMP.

If lilies are lily white if they exhaust noise and distance and even dust, if they dusty will dirt a surface that has no extreme grace, if they do this and it is not necessary it is not at all necessary if they do this they need a catalogue.
Though the quality and occasion of Stein's experiments is different from Hemingway's, the same kind of technique is at work. Stein's enjambment of descriptive language and reflexive commentary "if they do this they need a catalogue" is set off against the "red stamp" and the "white lilies"--"they will dirt a surface" etc. In other words, the tactile and visual qualities of actual things are forced together to form distorted constructions which may resemble more accurately the way in which perception actually occurs in the brain. The language thus becomes both a vehicle and an analogue for a program of representation of experience.
This may be what Hemingway "learned" from Stein and Cubism. Though Hemingway was not, in the strictest sense of the word, an "experimental" writer, he saw how a description of raw sensory data tightly conjoined to overly simplistic, direct statement--"Nick was glad to get to the river...His trousers were soaked with the dew as he walked...The river made no sound"--would allow him to eliminate unnecessary bridges and connectors in the interests of concision and rapid continuity. The flow of sensation runs like a thread through consciousness, picking up specific impressions, leaving nothing behind--the silent flow ("no sound") of the current of time/feeling. 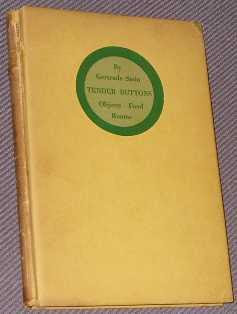 Stein's experiments seem much more closely aligned to a true "Cubist" elaboration, derived from painting. Language, however, is multi-dimensional, and multi-contextual, in ways that two-dimensional art is not. Both Stein and Hemingway admired the work of Juan Gris, whose classic cubistic arrangements are perhaps the most distinctive and satisfying of the genre. Employing straightforward objects, distorted into competing dimensions and perspectives implying multiple, simultaneous views, his compositions are nevertheless tightly controlled puzzles of angles and masses, which "fit" together to make decorative arrangements "locked" in a kind of frozen tension. 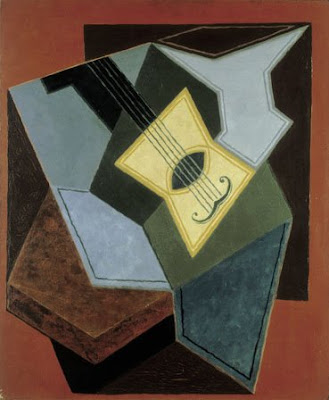 Though Gris's studies and still lifes are static and immobile, they imply a kind of meditative accommodation which is a commentary upon the paradox of perceptual integration and disintegration, as well as acknowledging irrational distortions that modify the experience of perception itself. In the canvas below, the left hand side of the open book becomes both a (verso) leaf, and a mirror reflecting the recto leaf lying flat (it's almost like an Escher!). Abstract shapes accidentally suggest other things--a hand with finger pointing, a bird head and beak, etc. This kind of whimsicality bears comparison to Stein's deliberate linguistic distortions. A coffee-cup may suggest dirty yellow, coal black, rose-wood, but what do these sensations lead to? Perhaps a "mingled astonishment"? 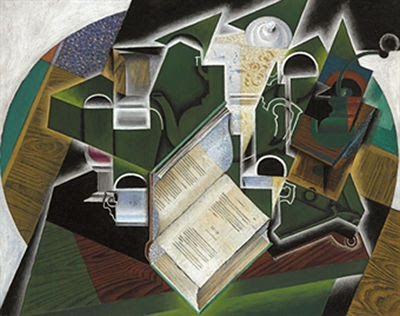 Posted by Curtis Faville at 8:42 AM

good essay, man!
;as every sentence/narrative is in a straight line (when it is) from thinking isn't necessarily
as fast as the mind/thinking can
pin "it" down.... so, that
everything depends this...flow

-clouds do not interfere
w sky...

I happen to be reading Stein's "The Making of Americans", and I can see the need for Hemingway to acknowledge the influence of this great writer. I think it was Ed who said to me recently that America, in general, learns from her!

Apparently even Joyce's brother, a critic he should have listened to more often, had accused the author of "Finnegan's Wake" of having tried to do no more than just outdo Stein! Wow!

I appreciated the Stein-Hemingway dialogue (though I found your characterization of Hemingway's style a bit flat in places) but, unfamiliar with his work, cannot comment on the Gris connection except to say, again, that the Cubist influence on writing (and writers) during that period is pretty commonplace.

Who among the Hemingway critics that you have read, deals, in any detail, with the fine points of Hemingway's composition? The most I remember is "the repetition of simple declarative sentences" or "the use of 'and'" between clauses" or similar things.

You mean my characterization, or my description of, his style? Who else do you see as employing a "cubistic" approach to writing, among Hemingway's contemporaries?

works on Hemingway, the man, writer and style, are legion: it wouldn't be long before you found something on Hemingway 'stylistics' somewhere in the theses, monographs, books. I can think of, for example, Carlos Baker. "Hemingway:The Writer as Artist"

By 'flat' I meant that commentators sometimes can't seem to see more in Hemingway's style than the simple declarative (paratactic) style, ignoring the pretty good 'rhetoric' that's at work. Consider, for example, the fairly complex interweaving of bibilical symbolism and language in " Old Man and the Sea", a nicely complex textual 'layering' that's oftentimes the result (in my view) of Hemingway's longer, more complex phrasing. You'll see how deceptively 'simple' Hemingway's style is only when you try to imitate it. Look for the same sort of stylistic layering in "A Clean Well Lighted Place"

I think most people would acknowledge the undoubted influence of Cubism on Dada and Surrealism (in both art and poetry), their practitioners in both America and Europe. I have mostly poets in mind, and, of course, after Stein, Joyce, et al. it seems everyone'd been borrowing 'cubist principles of construction' for their writing. A contemporary French novelist I have in mind is Robert Pinget.

Hemingway's best writing (qua writing) is in the earlier short stories (In Our Time, Winner Take Nothing, and Men Without Women). He probably never wrote a first rate novel (as such), though A Farewell to Arms and The Garden of Eden are impressive in many ways. The Old Man is a long novella which was taken out of the much longer work Islands In the Stream (a manuscript which was reputedly cut by over 60% by Scribner). Death in the Afternoon probably his best sustained performance. By the time of To Have and Have Not, he was already falling into self-parody, which would worsen over the 40's and 50's. Moveable Feast is quite economical, though what a bitter book!

I'd like to see the rest of the Letters. There are apparently another 2000 pages of unpublished letters in various archives.

Again, I think you're mixing thematic interpretation with stylistic analysis. The Old Man and the Sea is no more (probably less, actually) innovative than Big Two-Hearted River, which had been written 30 years earlier (in his prime). The most attractive thing about Old Man is its humor--quite uncharacteristic of later Hemingway.

I believe Jack London is another antecedent of Hemingway's,

London would belong to a whole tradition of "boys stories"--juvenile adventure literature--which played an important role in Hemingway's adolescent development. Frederick Marryat would be another.

Throughout his life, Hemingway was fascinated with the toys of adventure: Boats, planes, weapons, etc. He believed that his knowledge of these technologies enriched his fiction, an expertise on which he prided himself. Conspicuous on his reading shelf were volumes of Jane's guides, which he would browse for casual pleasure.

Hemingway extends and continues the tradition of which London was a major participant, a tradition which itself is a part of Hemingway's larger concept of man's place in the universe.

Stylistically, these tendencies temper his apprehension of character in narrative prose: Hemingway expressed his male sexuality through language. Perhaps this is an unintended connection between himself and Stein--both seek to express a similar command over materials, to dominate the text, by somewhat similar means.

newspaper reporters fast and furious and always
covering every angle/nuance:

am sure that all of 'em covered Teddy R and Larry of Arabia::

and, as an x "stringer reporter"

no doubt my writing stylistics and copartmentalIzation is also

I find it very interesting that on CNN, MSNBC, etc etc not a single mention of Gail Storm OR
Karl Malden...

Man, you're on Obscurity Island, cut off from the media and dying of thirst.

Was she the progenitor of Love Boat, or what?

she was My Little Margie!

what if suddenly
you discovered that
I am the sane one

I'll be worth
more
after
I'm dead

Sane or sad, we're all in it together.

Here's to Florida sinking into the Carib!

am surprised that Florida and especially Miami hasn't yet drowned in its own sewage!

as far as this Dingy goes

its sinking
and I'm rowing as fast as I can!
and, yes

we ARE in it together...