Whalen Again - Portrait From Another Direction 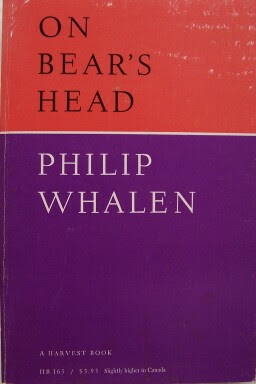 You can talk about the writing or you can talk about the man. Does a man's writing stand for the man, or does the man stand beside his writing (taking full credit and responsibility for it)? Whalen might have said that selflessness is close to godliness, in that we are mere vessels through which divine inspiration may--or may not--come. Whalen was a man who never seemed to take his luck for granted. Many of his poems come roundabout to a provisional conclusion, wary of satisfaction, respectful of fate, and modest in expectation.

We've all had the experience of watching a dragonfly light on a twig or a rock nearby, or just hover nervously in mid-air. Dragonflies are among the most primitive of living things that still survive; they've been around since the dinosaurs, in fact they were around 100 million years before that, so you could say these little guys are a talisman of duration--the perfect formula to carry the DNA of life through time's adversity.

They're also extremely agile in flight, can hover, change direction, land and take off, with astonishing speed. They're carnivores of the insect kingdom, eating smaller insects than themselves. In their nymph form, they live in water, and breathe through gills in their rectum, and can rapidly propel themselves by suddenly expelling water through the anus (a neat trick!).
You can be looking at a dragonfly hovering beside you, its twin sets of wings quivering, and suddenly it's gone--they're that fast, your eye can't follow them. Metaphorically, this astonishing speed suggests a form of transubstantiation, or the instantaneous transfer of matter from one place to another, without literal apparent means.
Is the poem a true haiku? Well, that depends. Classic haiku, the three lines, traditionally defined 5/7/5 syllable scheme. Given a little latitude, one could almost call any short English poem of this approximate length a haiku, especially if it functions as one--that is, through the juxtaposition of two things (as, an image and a comment upon). Clearly, Whalen's self-conscious decision to make a haiku poem implies a Zen content, and is well within the haiku tradition as it comes down to us through translations in the West.
It differs, however, from its antecedents by not simply setting up a contemplative observation, but in some sense enacting what it describes. It is not simply static, but a live current to transmit energy! This notion of an energy construct is a post-Modern idea, one which Charles Olson referred to in his essay "Projective Verse" [1951]. The embodiment of an energetic charge--or linguistic discharge--is crucial to much of post-Modern poetic theory.
The poem sets up a dialectic between two sets of narrative. The ostensible "poem" (or traditional haiku) is in the lines "Here's a dragonfly/Where it was,/that place no longer exists." This is a fairly straightforward, if somewhat predictable, haiku sentiment--the transitoriness of nature, of matter in any temporary form, or the ephemeral nature of visual perception, or of the mystical "disappearance" of an observed "moment" in the continuum. It's a Bergsonian idea: that Duration is unextended yet heterogeneous, and its parts cannot be juxtaposed as a succession of distinct parts, with one causing the other, thereby making determinism an impossibility and free-will pure mobility, which he called Duration. Perception of instantaneous fleeting moments suggests that we can capture frames or images from time, like putting an insect on a pin, but our sense of the continuous flux of "everything" proves that this is an illusion. Nothing stops. Nothing stands still. Everything is moving. Everything is irretrievable.
The other half of the dialectic is the capitalized simultaneous parallel words "I S" and "( T O T A L L Y )". How do these two juxtaposed words function within the narrative of the poem? They're both "inside" the poem and "outside" it. You could say they represent a sort of deus ex of the world will (or universal spirit). Everything simply "is"--beyond human agency or blessing. This "is"-ness is totally encompassing (the universe), not limited either by our perceptual apprehension, or by the means of expression (language, mental processes).
The poet's perception of the being of the dragonfly--its "being"-ness--represented by its physical body existing in one place, then vanishing--inspires the realization that matter and empirical observation are illusions. As we sit on the earth, studying this hovering dragonfly, we're upsidedown, spinning around a planetary gyroscope, in an elegant dance of multifarious energy and matter of which we, the dragonfly, the twig it rests/ed upon, the air and the light and the moment in time, are all an involuntary, accidental part.
This superconsciousness of awareness of the universe is a very Buddhist concept, not altogether alien to Western thought, but difficult to express except in formulaic terms. This poem is another example of the concise equational quality of the best short poems, which can express things that 1000 pages of dense philosophical analysis can't. It's like a summary of one of the important points of Wittgenstein's Tractatus: That in signifying what can be said, it will signify what cannot be said.
Whalen's poem is an attempt to say the unsayable. The simultaneous hovering analagous capitalized letters (words) are symbolically linked to the hovering of the dragonfly: The moment in time which seems to hover precariously, and then vanishes before our eyes. The "I S" is an expression of the pure energy of the body of the insect--the energy which holds it together as a formal structure, the energy by which it throbs and flits decisively through the continuum, and of the flux of everything else as well. "( T O T A L L Y )" functions as a modifier but it is really unnecessary. Whalen could simply have titled the poem IS and perhaps have had the same effect; though lacking the enactment of the juxtaposed parts, it probably wouldn't have signified as clearly what he intended. The dragonfly probably is the "I S" which hovers above the poem proper--it's in the poem, or hovering just above it, both in and out of time, in and out of the poem.
Before such illumination there is no choice but to accede. All effort, all struggle, is encompassed within the continuum of the universal flux.
Posted by Curtis Faville at 8:02 AM

I don't have any real problem with the BE HERE NOW aesthetics of the Zen guys. I think it's a pretty good thing, in a way. It gets you to pay attentino to the natural world. the classical haiku writers would have maybe used a butterfly or a frog in place of a dragonfly (I liked the information about draagonflies, but was shocked by the proximity of the anus and lungs, which grossed me out).

It is what is seems to come out of Buddhism.

But I hate that formulation because it doesn't allow for any kind of change. I hear that phrase all the time now, "It is what it is."

Even businessmen use it. Walking through NYC I heard a man in pinstripes shrug his shoulders and say, "It is what it is."

I think the lungs and the anus should be moved a little further apart in dragonflies. It shouldn't be what it is!

I enjoyed your Beerbohm essay. I didn't have anything to say about it, but I enjoyed learning more about him. I still don't think I'll read any of his work. But I liked knowing how extensive his work is, and how ZD is his only novel.

It's famous, but I can't stand his overly slick style.

While our writers seemed obsessed with the gangsters.

Even Michael Jackson is still dancing out gangsterdom.

While Mick Jagger wants to be called Sir and to hobnob with royalty.

Just a series of stray thoughts, like stray dogs and cats, released into your comments box, fleas and all.

I would really like to talk about longer, more ambitious poems, but blogdom isn't quite suited to long, involved, convoluted analyses.

You're referring to "drugstore Zen" which was fashionable in the 1960's. Existentialism had a similar vogue in the 1950's--then it died out, but people have gone back and found good things in it to talk about.

Whalen was quite serious about it. One must also note that his use of the dedicated "haiku" to Snyder suggests a slight distancing--the poem could be seen as tongue-in-cheek. "Totally" could be a satiric use of the cliche, rather than a straight use. Whalen was by no means the credulous animal my explanation of the poem might suggest. That's why the poem may exist on an ironic plane, and not just as a corny "ahh soo" orientalism.

There are a lot of weird things in nature: Snakes which smell with their tongues. Fish which change their sex. Sharks which "hear" with their ribs.

Then of course there are the meter maids who eat their young.

i am amazed at the way dragonflies mate flying in tandem
and the way they sort of slowly nosedive and die with wings held down to the ground
this year a very large bluish dragonfly landed perfectly vertical on my window screen and died there the ectoskeletal remains are still there in the corner on the screen
i suppose when it finally falls off in the winter or in a strong wind that place will be gone (?)

to me it sounds very presumptuous to say the place where the insect was is no longer...to imply that the place was defined somehow by the momentary existence of the dragon fly...actually a hummingbird could settle into the precise space the dragonfly stopped...or any number of other insects

i have wondered
i know a benedictine monk
damien whalen
born in n california
who never really knew his father
and have wondered time and again
if he is the son of philip whalen
once when we were together in a monastery in s california a guy showed up in a car and the monk later explained to me it was his father
as far as i knew the guy never got out of the car for two days just stayed there and slept there
this would have been in 1994
i seem to recall philip was blind by then (?)

what do you think?

I haven't a clue about the Whalen lineage, but I doubt if Philip has any stray children about. Still...you never know.

I disagree about the presumption of the "place" in space/time the dragonfly "occupied." The whole point of the poem is to point out the transitoriness of the frame of time/space in which the event/vision exists/is recorded. The poem is really a "report" of an imaginary instance, which we have no real verification of, yes? It happened, or it didn't happen. The ephemeral quality of it is what is so suggestive--which I tried to explain with the Bergson quotation.

Dragonflies are really wonderful creatures, provided one isn't one of their victims!

i noticed this morning that the dragonfly skeleton has fallen from my screen...i look at the very space where it was...from a naked perception point of view it is the same space where it landed and died...the space one could perhaps discern now is changed...something living died was present in death now has been cast away by wind so the space is changed

thanks for your posts
they're really right

Graphite is perfectly acceptable, albeit a bit "tippy" in short range situations. It plays differently than bamboo, which seems less "harmonic" in its response.

Bamboo is very expensive--but used bamboo rods can be had for reasonable.