The ballet Fancy Free [1944] was the collaboration of Leonard Bernstein (score) and Jerome Robbins (choreography). Premiering just 15 months before the Japanese surrender in August 1945, its theme was three sailors on shore leave in New York. 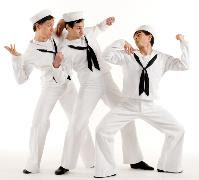 The ballet, and Bernstein's music, was a melding of musical theatre, jazz and classical traditions, in a way that really hadn't been attempted before. Bernstein, a young composer and budding conductor, was interested, as Gershwin had been 20 years earlier, in the possibilities of uniting American jazz with classical elements. Copland's ballets Billy the Kid [1938] and Rodeo [1942], had broken new ground with native American subject-matter and popular "Western" folk music material, but the idea that you could combine the hard intellectual surface of Stravinsky with the lyrical Ellington style had never really been tried before.

The production of 1944, which my Mother saw at some point later (in San Francisco?) was an unforgettable experience in her life, and her nostalgia for that was sustained by the concert suite recording of the music on record, which became a staple in our home during the 1950's and '60's. Reviewing the debut in the Herald Tribune, Edwin Denby called it a "smash hit", saying "It is a direct, manly piece: there isn't any of that coy showing off of 'folk' material that dancers are doing so much nowadays. The whole number is as sound as a superb vaudeville turn; in ballet terminology it is perfect American character ballet."
Ironically, the success of the ballet led to the idea of its being adapted as a regular musical (On the Town). Having produced a fine score for the ballet, Bernstein went right back to work and produced a parallel adaptation for the musical, a new work from scratch. The musical, as everyone knows, was eventually adapted to the screen, as the movie On the Town [1949], starring Gene Kelly, Frank Sinatra and Ann Miller.

The whole idea--a sort of short story dramatizing America's wartime consciousness of fatalistic euphoria--became a success in three media, with Bernstein's music for the first (ballet) version entering the revolving concert repertory as the best example of his ability to meld disparate elements of musical traditions into a popular tapestry of dramatic program-music. Alongside the score for the movie West Side Story [1957]--his other great popular success--Fancy Free stands, alongside Appalachian Spring [Copland, which premiered in the same year], as among the highest expressions of the populist trends of the Depression Era, a socially responsible belief in the importance of folk thematic material, and a faith in society's ability and willingness to support serious art. 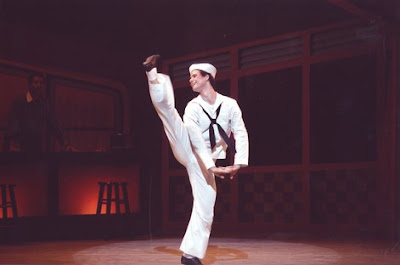 Bernstein himself, all his life, struggled with the competing demands on his imagination, between pure classicism--conducting the Philharmonic, producing serious uncompromising concert works in the 19 Century tradition--and popular, accessible stage and movie works. For Robbins, this was less of an issue. Ballet suffers less from the contradiction between traditional and popular modes, and can accommodate innovative styles (such as jazz or modern abstraction) with less strain.
Posted by Curtis Faville at 7:36 AM

ON THE TOWN IS ON TCM right now..

they are on the train with the
two cattery women and..


Fred who was also a dancer
and who taught not only Fred many dance things but my daughter's tap-dance teacher was Fred's student ..

so, Fred came to the dance studio and my daughter took two days worth of tap classes with Fred Gene's brother.

I was in the "wings" taking non-stop pictures

so, Fred stops what he was doing and asks:

"who belongs to the photographer?"

so after Evie raised her hand

Fred moves my daughter up to the front row

Fred and Gene made only one movie together I have never seen it nor know it s name..


Donald O'Connor was another 'fun' dancer

so was Peg Legs Bates