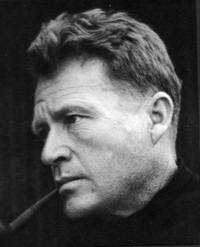 Brett Weston [1911-1993], was the second son of Edward Weston [1886-1958]. It is not unheard of for a superior artistic talent and proclivity to pass from one generation to the next, but it's unusual when the son's work carries on and elaborates upon the father's accomplishments, as seamlessly and interestingly as Brett Weston did. The Twentieth Century saw the flowering of the first phase of art photography; in fact, father Edward was instrumental in showing the potential aesthetic possibilities of "straight" (clear-focus), on a par with the efforts of painting and sculpture.

At an early age, Brett was taken by his father into the realm of photographic practice, and the precocious boy took to it like a fish in water. By the age of 20, he had already produced a handful of images, whose visual insight and formal sophistication would soon rival that of his famous parent's. Father Edward's career was cut short by Parkinson's Disease in the early 1950's, just as he had come to the height of his powers. But Brett lived into his eighties, and one has the feeling that, through his single-minded dedication, he managed to accomplish just about everything he had set out to do. A couple of years before his death, he burned all his negatives, in the conviction that no one should ever be allowed to "interpret" his pictures (make prints of them) in ways other than he would have chosen. For three decades, their respective careers ran side by side, Edward's fame essentially overshadowing his son's work. Perhaps as a result of this curious overlap, Brett was slow to attain his just recognition, especially with the general public.
In addition, given the nature of Brett's genius, and his aesthetic preoccupation(s), it was perhaps also not surprising that his images were not greeted with the same favorable response that Edward's had enjoyed in the 1930's and '40's. And Brett was the loyal son: He selflessly aided his Father to produce a summary portfolio of his work in the early Fifties, and jealousy doesn't seem to have played any significant role in their relationship.
Whereas Edward had settled on the 8x10 format early in his career, and insisted on contact printing as his preferred print mode, Brett experimented with different formats. Early in his career, he spent time with the 11x14 (affording elegant contact prints), and later in his career, he worked with smaller formats, even medium format, partly in response to the improved technology of smaller cameras and lenses, and also to lighten the burden of lugging heavier equipment around as he grew older.
Brett was a plein-air photographer. What "studio" work he may have done was largely restricted to portraiture. Landscape was what he loved, and he spent the last 40 years of his life traveling the world in search of subject-matter. 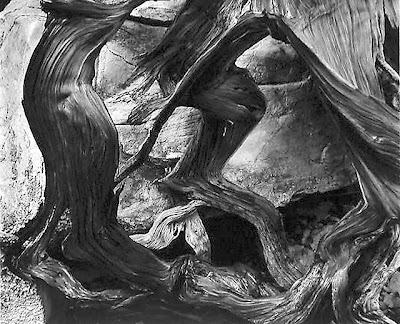 What particularly distinguishes his vision is his concentration upon formal abstraction. In the 1940's and '50's, Abstraction Expressionism swept across the art scene, pushing aside representation and realism in favor of other qualities than mere pictorial effects. Historically, I'm not sure which came first, Brett's interest in abstraction, or the art movement. Maybe it doesn't matter. What is clear is that Brett Weston's abstract vision, seen in black & white, derived from a broad range of different kinds of texture and subject, is the primary focus of his imagination. He could, and did, turn out magnificent panoramic landscapes, nudes, architectural studies, urbanscapes, and so forth. What makes him unique was his ability to construct vivid, often high contrast, compositions out of varying phenomena, to a degree that the ostensible "subject" itself becomes almost (or completely) irrelevant. One of Brett's little jokes is making images so abstract that you can't figure out what they are, or whether they're upsidedown or sideways. This picture of the Mendenhall Glacier in Alaska is clearly a study in water and ice, but it's so much more! The stark contrasts, and serene, mirrored floating bergs, have a dreamy, ethereal quality that is beyond any simplistic "appreciation" of nature. Ultimately, the "beauty" and vastness and glowering symphonic lyricism (which was what Adams sought, finally) aren't Brett's interest. He was a conservationist, but making pretty pictures of national parks had nothing to do with his art. 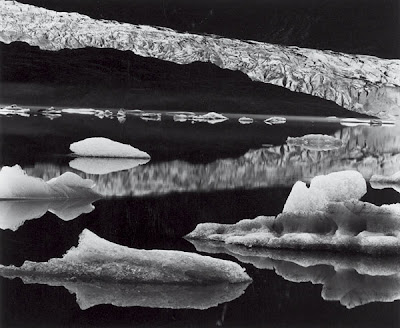 The point of his images, then, was in making anything (what he referred to as "magnificent gorp") into an interesting photograph. Harry Callahan famously was quoted as saying that a good photographer should be able to make interesting photographs of anything within 15 feet of wherever he was at any moment. That may be taking it a bit too far, but BW's work is in some measure a demonstration of that possibility. Droplets of rain on the surface of a tar roof may not sound like an inspiring subject, but look what effect(s) he's able to achieve with it! 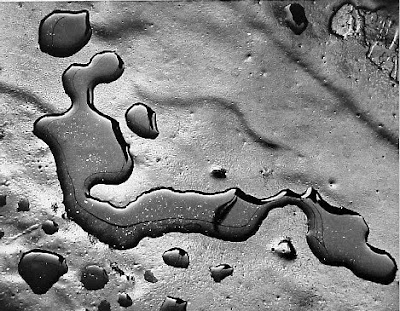 One of the conundra of abstraction is that it is possible to suggest symbolic or familiar shapes, while not wholly investing the occasion as a visual joke or crude irony. BW was a master at deriving abstract shapes that hover delicately on the edge of symbolic representation, without losing their intellectual integrity. As weird and suggestive as his images often are, we are never allowed to forget that we're looking at a specific thing in the real world. These are not manipulations like Jerry Uelsmann's images, for instance. "Reality is stranger than our dreams"--Frederick Sommer. 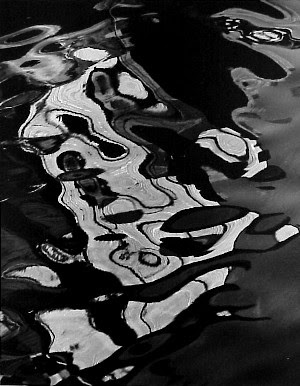 The power that BW brings to the photographic act derives from an ability to apply the expedient rectangular frame to the variability and chaos of form as experienced. Everything that needs to be in the frame is there; we don't feel the need to see outside what he has chosen to present to us. This holistic vision is a gift. As you study a potential image through the ground glass, you search both for resolution (balance and fit), as well as certain undefined qualities (mystery, disorientation, lyrical shape, etc.). These formal qualities aren't easy to define; Brett himself was reluctant to discuss the aesthetic meaning or significance of his work, preferring to let others do it. Like many abstractionists, his approach was deeply intuitive, and probably unconscious: Perhaps talking too much about a profoundly personal method would only have seemed a violation of the private realm in which he worked. I didn't have the opportunity to know Brett, but I did see him once, at a book signing in Carmel. I asked him if he'd be willing to print a certain image of kelp he'd had reproduced in a book published by The Friends of Photography. "I don't know which picture you're referring to. I take all day to make a single satisfactory print, so it will cost you." I never got in touch with him after that, though I did eventually buy three of his archival prints from a dealer after he died.
Brett Weston's work has been a big inspiration to me as a serious black & white landscape photographer. His work was my main inspiration.
Posted by Curtis Faville at 9:10 AM

His achievements have often been overshadowed his father.

I feel that Brett took what Edward did to another place!

His images move me and also inspire me.

Edward and Brett have influenced my Art.

I also find beauty in the shadows…