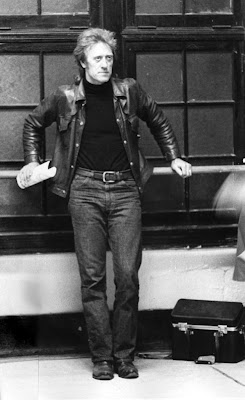 The first, and I think the only, time I heard Ed Dorn was on a KPFA broadcast way back in the 1970's, and quite by accident. Dorn had given a reading of North Atlantic Turbine, the whole book, and it was a very clear occasion, his enunciation was immaculate and clear and intelligent, except that he sounded like one of, maybe one of the most, sardonic men I'd ever listened to. Just filled with anger and bitterness and hard ironies. Certainly it rivaled Olivier's performance of Richard III's opening speech. Did he mean well? Could he be so perturbed about a system of trade that had exchanged rum for sugar for slaves, round and round, a hundred years late, and later? How was care to find its object?

The Air of June Sings
Quietly and while at rest on the trim grass I have gazed,
admonished myself for having never been here
at the graveside and read the names of my Time Wanderers.
And now, the light noise of the children at play on the inscribed stone
jars my ear and they whisper and laugh covering their mouths. "My Darling"
my daughter reads, some of the markers
reflect such lightness to her reading eyes, yea, as I rove
among these polished and lime blocks, I am moved to tears and I hear
the depth in "Darling, we love thee," and as in "Safe in Heaven."
I am going off to heaven and I won't see you anymore. I am
going back into the country and I won't be here anymore. I am
going to die in 1937. But where did you did my Wanderer?
You, under the grave grass, with the tin standard whereat
I look, and try to read the blurred ink. I cannot believe
you were slighted knowing what I do of cose and evil
yet tin is less than granite. Those who buried you should have known
a 6 inch square of sandstone, flush with the earth
is more proper for the gone than blurred and faded flags.
Than the blurred and fadded flags I am walking with in the graveyard.
Across the road in the strawberry field two children are stealing
their supper fruit, abreast in the rows, in the fields of the overlord.
Miller is his authentic name, and I see that name represented here,
there is that social side of burial too, long residence,
and the weight of the established local dead. My eyes avoid
the largest stone, larger than the common large, Goodpole Matthews,
Pioneer, and that pioneer sticks in me like a wormed black cherry
in my throat, No Date, nothing but that zeal, that trekking
and Business, that presumption in a sacred place, where children
are buried, and where peace, as it is in the fields and the country
should reign. A wagon wheel is buried there. Lead me away
to the small quiet stones of the unpreposterous dead and leave
me my tears for Darling we love thee, for Budded on earth and blossomed
in heaven, where the fieldbirds sing in the fence rows,
and there is possibility, where there are not the loneliest of all.
Oh, the stones not yet cut.
(--from Collected Poems 1956-1974)
I once had an argument with Marvin Bell in his office, when I was at Iowa in the early Seventies. Dorn was another of those forbidden names I pulled from my personal pantheon to offer as example for my own efforts to find voice and identity as a writer. Marvin said, blandly and with condescension, "Dorn writes prose, it's just prose broken into false lines, don't you see?" I was not able to understand this view of his work then, and I don't see it now. It seemed a misreading, a dully unperceptive take.
It would be hard to imagine a more stately and measured line than "Quietly and while at rest on the trim grass I have gazed". It's like something out of  Wyatt, or Campion, filled with air and angels, as they say. Is such affected phraseology over the top? "I am going off to heaven and I won't see you anymore. I am/going back into the country and I won't be here anymore. I am/going to die in 1937." Dorn imagines himself into the dying generations of settlers, rather like Marshall Dillon walking disconsolately up on Boot Hill, ruminating on the vicissitudes of law and order, fate and death, on the wild frontier.
For the first third of his life, Dorn lived poor. His early collection of stories By the Sound, was an important update, for me, of the intinerant labor culture of the 1930's, which I'd read about in The Grapes of Wrath. Dorn's sympathies in those days were all for the downtrodden, but inside he was an impressively sophisticated, elegant and prideful man. Drawing upon the pop Western and early Modernist hero traditions, he embarked upon an ambitious camp narrative poem in the 1960's, Gunslinger, which gradually, after much fanfare at the outset, petered out in a series of half-hearted tangents. Does Gunslinger, with its over-arching rhetorical flourishes and hip burlesque tone, undercut or subtract from Dorn's early straight lyricism? That's very much, I think, what people tended to think, as Dorn morphed, in the late 1960's, into the eccentric contrarian of his middle- and late age, scornful and contemptuous of post-Modern cultural paradigms.

But an author may undergo successive transformations of character during a lifetime. Literary history is full of examples: John Dos Passos, or John Steinbeck, two serious novelists who began as sympathetic populists, and ended as cantankerous old reactionaries. Over a lifetime of dispute and critical haggling, fatigue and frustration often set in. "The Air of June Sings" strikes my ear as pure and unadulterated, the young parent walking with his children (much as in the other poem "The Rick of Green Wood"), inspired to meditate in an antique mode, like a wreathe of spirit-mist among the lichen-encrusted gravestones, "lead me away/to the small quiet stones of the unpreposterous dead and leave/me my tears for Darling we love thee," (addressed to whom?).

It's a poem every bit as formal and serious, in its way, as Tate's "Ode to the Confederate Dead" though forsworn against such stricken pieties, defeated and discouraged.
Posted by Curtis Faville at 5:16 PM

I like everything about Dorn, somehow especially now that he's safe and dead.

He was a scary guy at times when he was alive.

But now all that bluster is gone, and just the poems. I loved Tom Clark's bio of him.

I loved Tom Clark's bio of Chazbo, too, but I think most Chazbo fans wanted a hagiography. He gave us Chazbo unadulterated, and I liked the big flop better for it.

Dorn makes more sense knowing his background, which was possibly even darker than it's painted in the bio. His erstwhile roommate at college told me everyone thought his mom had prostituted herself to make "ends meet" as they say.

I think Dorn didn't have it much worse than most did at that time. My dad picked radishes all day for a dime an hour in the depression, but a dime back then was probably about three dollars now. And for a kid, three dollars an hour isn't so bad, especially if you're dealing with radishes, rather than radicals.

The great book of the Passos-Steinbeck era was probably Gone with the Wind -- the only book of its author and totally unreadable by me, as is Passos and Steinbeck. Crippled by some kind of seriousness that I can't take seriously.

Give me Dorn any day, but I like it better as he got a sense of humor about himself and everything else, and just upchucked the whole experiment of the 20s that he had had to try to keep down, all of it stank, and finally, his nose just said throw it all up, and start over, and he did.

Those very last pieces in Abhorrences and a few others showed what he hated, and how he liked Martin Luther, after all, who had a better nose than Marx who would just chow down on any old crap, foraging bellyacher that he was, unable to tell the difference between nuts and squirrels.

Just seeing this post. I love your take on Dorn, whose work can certainly be brilliant. I'm actuallly teaching Gunslinger, beginning today in a class at U of Arizona. I only met Marvin Bell once, and "dully unperceptive" seems to me a good characterization of Bell. We were at a dinner gathering in Port Townsend, WA, and somehow Olson came up, and Bell just said some nasty, un-thoughtful things. I had been seated next to him, and I ended up leaving that dinner early.

I also like Dorn's lyrical early "geographic" poems, such as "Ledyard: The Exhaustion of Sheer Distance," in which I think one can find much of what draws Dorn to tales of wandering, sometimes without purpose, or with purpose thwarted.

Arizona. Are you in Tempe? With Dubie?

Dubie a I attended Iowa at the same time.

I don't want to denigrate Bell out of hand. I've always admired his early poetry, and he's very intelligent. In his taste he's a conservative, largely, given his situation at Iowa for over 30 years. But he certainly cared little for the New American Poetry group. Even if you take all the bluster and ponderousness out of Olson, you still have some wonderful poems. Marvin's lived in Port Townsend for a long time. I don't understand his later work at all--the "Dead Man" stuff.