The San Francisco Giants' recent difficulties at Denver highlight a season-long problem the team has had generating runs in the clutch. Sporting a major-league leading low team pitching ERA, the've lost at least 20 games as a result of weak hitting. As the design of teams goes, the Giants can claim that they've constructed a line-up based on opportunistic hitting, speed, hustle and "smart" at-bats; since they lack power and don't even really have a classic RBI 4th-place man, since Barry Bonds left. But their performance in terms of on-base percentage, walks, average, and in clutch pressure situations, has been dismal.

Overall, the team is young, with a median age of 29+. The team started the year with a handful of mostly untried rookies or second year candidates, including Ishikawa, Burriss, Sandoval, Lewis, Schierholtz, Velez, Torres, Whiteside, Downs, Frandsen, Bowker, Guzman. They added Renteria and Aurilia in the off-season, but both of these players are clearly at the end of their careers, and haven't done much to contribute; Renteria, especially, either as a result of injury or declining skills, has been a disappointment.
The veterans--Molina, Rowand, Winn, Uribe, were joined in mid-season by new acquisitions Ryan Garko and Freddy Sanchez. Garko has been mostly a bust, so far, and Sanchez seems to have multiple injury issues, has been out for a week, and his situation is a big question-mark.
What's most hurt this team, with its good pitching, both starting and relief, has been a lack of timely, clutch hitting, up and down the line-up. Sandoval has emerged, in just the last year and a half, as a potential top-flight average hitter, who may be the next Tony Gwynn. A wild swinger, he's presented a dilemma for opposing teams: How do you pitch to a guy who gets as many hits on bad balls as he does with strikes? And yet, despite his high average, he still shows weaknesses which seem endemic to the whole team: A tendency to swing at bad balls, a tendency to "freeze" on first strike fast-balls, a general impatience at the plate, particularly in clutch situations where even a fly ball or a decent bunt could mean the difference in a game.
This generalized failure has been attributed by announcers and columnists to "immaturity" and a lack of big-league experience. But it's the same problem the veterans on this team are having. Winn, Molina, Rowand all are having what looks like sophomore plate appearances, each having difficulty judging pitches, appearing to "make up their mind" about pitches before they're thrown, and showing little or know count-sense or presence of mind.
You'd expect players like Ishikawa and Sandoval, Schierholtz and Velez to exhibit some of this behavior, but not the whole team. Clearly, what's needed is some coaching intervention, expecially with the younger players.
Having gone out and traded for extra help in Garko and Sanchez, the Giants have signaled that they're interested in remaining competitive for the present campaign, rather than simply throwing in the towel in and "waiting for next year."
In November, the Giants hired Carney Lansford as their hitting coach. Lansford has been pursuing a major league coaching career. As a former AL batting champion, he possesses the official credentials to offer advice to young hitters. But the results speak otherwise. This team has been in a deep batting funk all season. There are flashes of excitement, when they string together a series of singles and doubles, and can score half a dozen runs in two innings, but far too often, their failure to put up respectable numbers, against even ordinary opposing pitchers, suggests that they're not getting their money's worth out of the talent they do have.
This is a team based on great pitching--it has to scratch and scramble for runs. But its failure to bat "smart" is costing it countless opportunities in important games.
All the signs point to an ineffective batting coach.  Lansford looks like a bust. 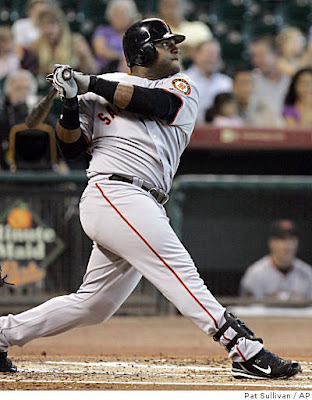 Posted by Curtis Faville at 7:40 AM