John Wayne [1907-1979] had a long and fruitful movie career. It's been fashionable for at least the last 40 years, to scorn his acting talents, as well as his personal life and opinions. Wayne had a big ego, and became a high-profile reactionary conservative during the 1960's. But an actor's skills and accomplishments can't be measured by his failures, either in his work, or in his life. The Quiet Man [1952], directed by John Ford, and co-starring Maureen O'Hara, Victor McLaglen, Ward Bond, and Barry ("put a rose in your glass") Fitzgerald, stands as one of Wayne's three outstanding screen roles, the other two being Red River [1948] and In Harm's Way [1965].

Wayne's career unfolded in a predictable way. Starting out as a stunt extra, he was noticed and turned into a contract Western player in the Thirties, and his career stuck in that groove until Ford put him in Stagecoach [1939], and the rest, as they say, is history. Wayne's range as an actor wasn't great, he'd never been classically or professionally trained, and he tended to act "down" to a part, rather than try to find in it different dimensions of himself. The Quiet Man was really a departure for him, following a long string of gung-ho Western and soldier roles throughout the WWII and post-War years.
In Quiet Man, he plays an American boxer who cashes out his promising career after accidentally killing another man in the ring (a plot device used in From Here to Eternity), and decides to emigrate "back" to Ireland. John Ford's Ireland is a Disney version, but with all its warts left on. It's a paean to its countryside, its people, its drinking and feistiness and pretty women, its tweed and brogue and rank humor. 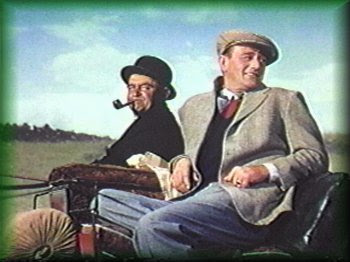 Sean Thornton wants to buy his late mom's old cottage "White 'a' Morn" and find himself an Irish wife. His first glimpse of Mary Kate Danaher (Maureen O'Hara, who never looked lustier or more headstrong than here) throws him into a love-fever, and he spends most of the rest of the movie courting her, between wild angry rides across the greenswards and fist fights with her brother Squire "Red" Will Danaher (played brilliantly by McLaglen). 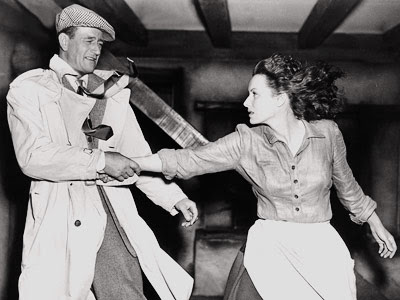 The film was shot in Ireland, and there isn't an awkward scene in it. Harry Callahan, the American photographer, said he had trouble photographing in Europe, because everything was so photogenic, he couldn't find an interesting frame! You could say almost the same thing about this film, from the opposite point of view.
The best thing about Wayne's acting here is that he doesn't get to wear a gun, and he doesn't have (the right) to lay the law down. This isn't open range, or Indian territory, this is mossy old Europe, its traditions and culture intact, its social mores and customs thoroughly ingrained. Wayne [Sean Thornton] will have to broker a compromise to win the hand of Kate Danaher fair and square and live in peace with his Irish neighbors.
One of my favorite parts of the movie is Ward Bond/Father Peter Lonergan's playing of a big salmon in the little river that runs through the town. He's so excited that he falls into the water with his priest's gown still on--while Kate is telling him (in Gaelic) about the horrible blunder Sean has made breaking the dowery custom.
Well-meaning townies concoct a plot to get Squire Danaher to agree to his sister's match with Sean, but when he discovers the trick he nixes the arrangement and all bets are off. The ensuing "homeric" fight between Wayne and Danaher is on an epic scale, and is probably the most exciting thing ever to happen in the little village of Innisfree.
One famous scene with Wayne and O'Hara has them sheltering from a surprise thunderstorm under a rocky old ruin. Their torrid kiss as the wind and water fleer across the scene is worthy of Wuthering Heights. In this one movie, Wayne managed to show for once, given the opportunity, that he could do humor and tenderness and a little wit, in addition to derring-do and blundering domination.
I'll admit that The Quiet Man is a corny piece of schlock, no matter how you cut it, but for sheer economy and vivid effects, it hasn't any equal in the literature of film. It employs its cliches and hackneyed stereotypes unashamedly, and succeeds in spite of them, because it builds on a firm foundation of dramatic principles. The Informer it isn't, but as straight Hollywood formula, it's a gas.
Posted by Curtis Faville at 5:12 PM

My opinion (since you asked)

one could do worst than

"cut your teeth" on those earlier (Wayne) copoke flicks

I always rolled up my dungarees like John Wayne did... 60 years later I stil roll uo my Roebucks...


his later (war-hero) "stuff" not my
cup-of-tea

what was that movie that Falk made: Murder She Wrote?


I think that I saw you on/in a Colombo episode. Is that possible?

You and my brother-in-law - I think he owns every flick John Wayne ever made. Probably even this one.

I wasn't talking about JW's color movies.. just the B & W stuff

those 1930's things like The Big Trail and The Three Musketeers

then we got him in all them CornPone Flicks

(She Wore A yellow Ribbon"

Wayne turned down a role In "All the King's Men"