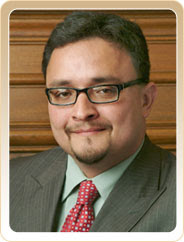 San Francisco City Board of Supervisors Member David Campos has made a proposal that undocumented juveniles (read Latino criminals) not be referred by the city to federal immigration officials, in direct controversion of Federal law.

Let's put this in perspective. Campos arrived in America at age 14, an illegal alien who grew up in the barrio of South Central Los Angeles. Taking advantage of the opportunities afforded by the American education system, Campos qualified for scholarships through college and law school. Moving to San Francisco, he capitalized on his minority roots to build a constituency out of the Latino community.

Now, positioned in the City government, he's using his authority to further the aims of the immigrant community, by softening statutes and regulations designed to control illegals.

The City has been the target of criticism for its policy of shielding illegals from immigration officials, following a triple murder by a Mexican illegal set free by the city authorities. The mayor's office has warned the supervisors that if they push the illegal "sanctuary city" position too far, they risk inviting unfavorable rulings at the Federal level if anti-immigrant advocates sue the city.

What are Campos's ultimate aims? Obviously, he believes--as many contemporary Hispanic politicians do--that his political future depends on his using his Latino background to build support in a growing constituency of legal and illegal South and Central Americans. It is clear that he will use whatever political clout he eventually acquires to represent the causes and agendas of the Latino community, even if those policies cause harm, or are not supported in the general population.

This is a pernicious evil perpetrated upon the citizens of California, and Americans in general. Campos exploited a generous and tolerant American society for personal gain. How does he demonstrate his gratitude? By representing the interests of foreign nationals seeking to follow the same illegal path he did.

Campos deserves everyone's repudiation. There's nothing admirable about him. He's a political carpetbagger; a virus, an infection upon the body politic. He's a pest, and should be treated as such.
Posted by Curtis Faville at 11:28 AM

He should be imprisoned.

That's because you haven't taken the trouble to find out what the social and environmental costs are of uncontrolled population, and uncontrolled immigration.

Almost everyone agrees (except a few stragglers perhaps such as yourself) that population and runaway immigration needs to be controlled. The question now isn't that it needs to be done, but how to go about it. Our government has in place a number of laws and regulations that are designed to implement the immigration policies which YOUR representatives--answering the expressed sentiment of their constituencies--passed in the Congress. But we have fake political constituencies cobbled out of immigrant factions whose only desire is to facilitate open borders. Rather than try to go about changing the laws in effect, they attempt to figure out ways around them, or openly advocate civil disobedience.

This is counterproductive. Neither California, nor the nation of America as a whole, is in a position to "absorb" (legally or illegally) millions of poor, uneducated, sick immigrants from Central and South America (and Asia). The economic prosperity upon which our way of life has depended is going away. Adding millions more to the mix isn't going to help.

We're not in a position to "dictate" policy to foreign nations (or their people). Why should we tolerate foreigners trying to drive a wedge into our country so their millions of deprived can pour across the borders? It makes absolutely no sense.

We can't "save" the Third World by importing all their poor. It isn't remotely possible.

Your "sentiment" may be admirable but it's seriously flawed.

JH has a big heart.

What exact law has this fellow broken?

Is there a state agency that you can contact and turn him in?

i hold with the indians
we're all illegals

how many dirty deeds were connived to ensure that our ancestors could settle here and live in peace??

when i was living near LA i recall a news story about a housing development above OHAI where some latinos had congregated and had been living for years...things were fine until the new residents started to complain that the sounds of animals bleating and cackling were just too much...those dirty earthbound people would just have to leave...there was a quote (i paraphrase) "those people don't even go to the supermarket to shop"...implying that they were somehow filthy for raising their own food

there's enough farmland arable land in the midwest from texas up to canada to feed everyone if we would get out of the monocrop agricultural mindset...food for survival rather than food for profit

i lived in AZ a few years ago and i was impressed with the rhetoric of bigotry there highminded white americans claiming ownership and despising the mexicans...then rounding them up in phoenix el paso and dallas and giving the men a choice -- you can put on a uniform and fight in iraq or we'll send you back over the line

taking that into politics is problematic for me

daily i confront my powerlessness

Before you can talk convincingly about the immigration issue, you have either to have some first-hand experience of it, or to study it a little.

Priority of claims isn't an issue any more in the debates over sovereignty. No serious person is suggesting we "give back" the West to the Indians, or that we "sell back" Manhattan. Or that we cancel the Louisiana Purchase because it was unfair.

That's pretty conclusively a dumb idea. Certainly you're not suggesting we "give back" the Southwest to Mexico? If you are, we can't have a meaningful debate about the immigration problem.

If you read my earlier post regarding "Controlling the Debate on Immigration" you'll see that racism and bigotry are charges the advocates of open borders and uncontrolled immigration throw up to confuse and cloud the issue. Wanting to control our border with Mexico does not make anyone "racist." It is certainly more racist for Mexicans to make that claim than it is for Americans to advocate closing our southern borders.

We are a world of nations. National policies and jurisdiction stop at borders. We have no right to dictate to Mexico or Canada or any other country how they should conduct their affairs, but we do have the right (and the responsibility) to determine our own fate within the limits of our jurisdiction. Would you advocate otherwise? If Mexico refuses to cooperate in controlling immigration, how should we deal with the problem? --throw up our hands and declare ourselves the loser?

Mexico is an outlaw nation, deeply corrupt, its governance and economy compromised and cynical. It does almost nothing for its citizens. It's no wonder they yearn for escape and emancipation from their plight. Mexican politicians are delighted to see millions of their poorest countrymen escape into the American economy, send money home, and get needed medical care, education, and social services here. It's nothing short of a windfall.

But you prefer to think of this paradigm as the result of "racism." Do you think Mexicans flock to America because we're racists? If we're such racists, how come they want to live here, work here, raise their families here?

No, racism is a claim which cynical political advocates use to provoke and intimidate critics of open border policies.

It's completely disingenuous of anyone to try to stir sympathy for immigrants by claiming that they "simply want to work and live in dignity." That's what everyone in the world wants. Should we, as a nation, stand idly by as millions of foreign nationals over-run our country?

You say Irish promoted Irish, Italians promoted Italians. That's true, but that's not what's happening here. Advocates of immigration "reform" want our border-controls removed so tens of millions more can stream northward, overwhelming our resources and infrastructure. It isn't about celebrating Mexican culture, it's about facilitating a wholesale "diaspora" of millions into our landscape, while American citizens stand by helplessly. Americans need to wake up and smell the beans before it's too late.

when the swine flu scare happened last year the turkey producing meat plants shut down and the bosses told the latinos to go home and don't come back until we're told it is safe...the locals got to keep on working

it is quite another matter to have ones life affected the way people in the southwest are on this issue
i grant you i am somewhat protected from that...my experience is with families ( one family i had to help get back to mexico to avoid incarceration...i drove them there) and in the parish...the one parish i work in occasionally is somewhat bigoted most of the local proud conservative americans refuse to worship with the latinos even upon being invited

campos must be a pretty smart guy
he's a harvard grad

christ o dear
what the hell is wrong with us

just one more observation
i spoke to many people in arizona and the peopel who lived inteh southeast corner of the state at least those who were synmpathetic to the mexicans almost down to the last one said...when the border stops were porous life was OK there were few problems people came and they went...it seems the clamping down on the border only increases the zeal and desperation of the people having for whatever reason to come el norte

that tends to put things in a certain perspective

There's a useful distinction to be made between the feelings and reactions one has on an individual level, and the political policy positions one holds.

Will Rogers said "I never met a man I didn't like" and there's a great truth in that.

One doesn't condemn any individual South or Central American for wanting to better his or her life. That really isn't the point. The fact that they're our neighbors is really just an accident; what makes them more important than, say, Ethiopians?

There's this enormous country, teeming with millions of poor and miserable--what do we do about that? what CAN we do about it?

Charity begins at home. I'd like to see America address her ills and shortcomings first, then see what we can "afford" to do for other countries (and peoples).

If you do church work, you're to be commended. I've done volunteer work, and even now volunteer for 5 hours a week on community support.

But we need to control our borders. There's really no other alternative. It's not about racism or bigotry or jealousy.

I believe in the quality of life, not in quantity. We, as a people, need to work towards our own welfare and security. If we can master those necessities, then, if our cup runneth over, we'll be able to offer a helping hand to others.