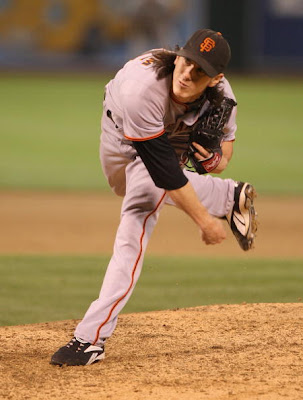 As the 2009 season comes to a close, the Giants Wild Card chances have evaporated over a two week period during which they lost a key series against the Dodgers, and their lead starters each had poor performances. It seems time, now, to summarize their season, and measure it against the expectations going in this year.

The management strategy seems to have been a team based on great pitching, good fielding, and timely "scratch" hitting. Runs would be hard to get, but every game would be a low-scoring contest.
Great baseball teams almost always consist of balance: Some very good pitching (at least two good starters, and at least one very good closer), some power (at least two power hitters, with a couple of others having career years), some speed (at least two fast runners, one of whom steals a lot of bases), and timely (clutch) hitting generally. Teams which are unbalanced (great pitching without hitting, or vice versa) generally have difficulties.
Teams with great pitching need a reliable offense to put up at least 4 runs regularly. Teams with great hitting need pitchers whose median ERA doesn't rise up above 5.0. Both Lincecum and Cain probably would, under ordinary circumstances, have had something like 20 and 19 wins respectively, this year, but for a consistent lack of run support against even mediocre journeyman hurlers.
Both Sandoval and Velez have been pleasant surprises, each hitting with style and power throughout the season. Sandoval may indeed be a career hitter in the Tony Gwynn mold, who can collect 185-200 hits per year over a 15 year period; his weight may be a problem, but Gwynn was always stout and it didn't seem to affect him. Pablo is only 22; barring a serious injury, he's a future franchise player.
After these two, the field of possible future players is much less certain. Aurilia is finished. Molina, Renteria, Winn are all likely to be either traded or released at season's end. Ditto for Johnson, who at 45 is simply washed up.
Among the starters, the rotation is fixed with Lincecum, Cain, Sanchez and Zito, all still young with good years ahead of them. Brian Wilson--though a little bit of a head case--is probably solid for the next decade as a reliable closer. For middle relief (or set-up) Jeremy Affeldt has been a pleasant surprise; but 2nd level journeymen come and go--this is probably something the team will have to reconsider again next year; certainly Howry and Valdez and Miller and Medders can't be counted on to be stars--middle relief typically is a thankless job, anyway.
The younger position players are a toss-up. Ishikawa, Schierholtz and Fred Lewis have had flashes of brilliance, but none of them is likely to be star material the way Sandoval will be. Each of them will be year to year, and may end up with careers like Winn and Rowand, always just a little shy of expectations.
Among the veterans, Uribe, Sanchez and Garko have uncertain futures with the team. Uribe is having a great year, but he's not in the team's plans for the future. Garko, obtained (like Sanchez) at mid-season to provide some quick punch, also probably isn't in the future picture. Among these three, Sanchez is the big question-mark. He's been a solid .300+ hitter for six years with Pittsburgh, but there are serious questions about his physical capabilities; the victim of significant birth defects, which he's overcome so far, it may be that these are catching up with him now, and that Pittsburgh could see that coming, which is why they dumped him. He's not a big power-run producer at 2nd, the way Kent was, but his potential value as a #2 or 3 hitter is tantalizing. IF he can stay healthy.
On balance, the team is still weak on power and run production, and desperately needs more of each to compete next season against the Dodgers and Rockies (two powerhouses). Garko, Rowand, Shierholtz, Ishikawa, and Uribe--none of these can be counted on to provide it.
There's a lot of sentiment, following the poor run production this season, to re-think the strong-pitching, weak-hitting approach. Ideally, one would like to be done with Molina, Renteria, Rowand, Winn, Aurilia, Garko, Frandsen, and replace all these with a couple of stronger-hitting outfielders, and possibly a slugger at 1st base. I wasn't impressed with Ishikawa or Bowker--they might make good trade bait. But, bottom-line, some money is going to have to be spent to get some home-runs and RBI's. Sandoval can't be a clean-up hitter--it's not his style. Who knows what Rohlinger or Posey may do?
At season's end, there certainly will be a pool of free-agents available. It will be interesting what GM Sabean does. At the very least, we need a new batting coach--Carney Lansford's been a complete failure, the whole team's batted like little leaguers all year. Winn, Renteria and Molina need to go. We need a genuine generic clean-up hitter, a player who can be counted on to hit between 25-30 homers, or at the least can knock in 100 RBI's, a year. The team needs another player (Rowand was supposed to be that) to hit 20 homers and score 85 runs, and come through in the clutch.
Whatever happens, it will be interesting. Few teams have the luxury of building around a great starting staff, as the Giants do. They shouldn't have to give any of them up, either, to get what they need. Sandoval was the great surprise this year, as Lincecum was last year. With even one young player rising to prominence next year, and a new slugger to add to the mix, a pennant would not be out of the question at all.  The Dodgers lack consistent pitching, as do the Rockies, and some of their stars are on the downward trend of their careers (Ramirez, Helton).
2009 was tantalizing. 2010 could be a break-out year for a dynasty.
Posted by Curtis Faville at 10:47 AM

Baseball takes too long to watch. There was more time in the 50s. I can't spend 3 hours watching a game. Do you really watch entire games while drinking your alcohol?

Some of Marianne Moore's poems discuss the Brooklyn Dodgers. I guess she went, and paid careful attention. She has notebooks filled with notes on who made a good catch, and who struck out.

I like baseball, but would prefer to watch badminton.

However, badminton is never on.

Do you think it would be better to cut baseball down to something watchable like an hour and a half?

This would make it easier on the rotator cuffs of pitchers, and get people in and out of the stadiums.

Who has this kind of time?

Nine players and nine innings though has a certain symmetry which I suppose draws many people.

But Little League teams often do five or six innings, and I think it's enough.

I wrote a poem (non-fiction) about my son's first Little League baseball at-bat, which appeared in the Cortland Review, and you can hear my voice that goes with it:

Better address for my baseball poem:

Did you ever write a baseball poem?

What do you think of Moore's baseball poems? I think perhaps one thing missing is that we no longer recognize the names of the Brooklyn Dodgers, so those names which once thrilled everybody, have no referent now.

Perhaps that's also a problem in my poem. No one but me reading the poem knows my son.