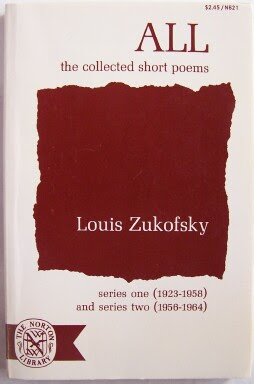 Louis Zukofsky's collected short poems were first gathered in the consolidated paperback original All: The Collected Short Poems: Series One (1923-1948); and Series Two (1956-1964). The earlier volume began with "Poem beginning 'The'" (a work which seems to me to be a take-off on Eliot's The Waste Land, published just a couple of years earlier), and concluded with Song #29 ("Mantis"). The chonology of the poems written in the 1940's and '50's is a little vague, there's some overlap and shifting of arrangement in LZ's collection in those decades, but it's pretty clear that the second volume demonstrates a growing interest in short poems, with less reliance on a rhetorical prosody, and more emphasis on alphabetical and even visual qualities.

Or at least that's the way Robert Grenier saw it, when he introduced a selection of LZ's minimalist works to his students at the first poetry writing course he taught at Berkeley in 1967, which I attended as an undergraduate. At that point, Creeley had moved definitively into his Pieces period, and it seemed as if everyone was either going to follow him (as LZ before him) down that road, or would choose an opposite example, like Ashbery, whose long poems were just beginning then to appear ("The Skaters," and later "Fragment," "Self-Portrait in a Convex Mirror," and so on). I thought of Grenier in those days as descending in a line from LZ to Creeley to himself, though in those days Bob (G) was so heavily under the shadow of Creeley that he may have had difficulty defining himself in relation to adopted mentor. He was struggling to find an individual voice, and you could just hear it, in works such as "tyke/Darrell" or some of the early poems that would eventually find their way into his collection A Day At The Beach (which went through a number of successive incarnations before finally being published in 1984).
What Grenier saw in the second installment of LZ's All, was poems for his own (and others') use: Zukofsky had the mind of a classical poet, but employed in/upon Modernist free (or invented) forms (Williams's "new additions to nature"). That was a purpose LZ--old radical ("or surd") that he was--would have appreciated--work as vehicle, not decoration for value--use as value.
The earliest "example" of LZ's minimalist tendency is apparent in his narrow stripped-down lyrics from the 'Thirties, like Song #16:
Crickets'
thickets
light
delight:
sleeper's eyes,
keeper's:
Plies!
lightening
frightening
whom . . . ?
doom
nowhere . . .
where eyes . . .
air,
are crickets'
air
*  *  *
You can just see Zukofsky at the precipice of an apprehension of language that is not iterative: The effects he's after here are more immediate than mere syntax, they hinge on quick echoes of mirrored, or syllabically translucent qualities, the "hearing" of mental cognates and proximal similarities. The terms are reduced to primal meanings with the rapidity of instantaneous associations. Later, these possibilities would be explored further, and sharpened like spear-points against the inertia of expectation and impatience:
A round
Isn't this a lovely field
in winter?
*  *  *
Who in snow
Has lain
Does not complain.
Whittle--
Whittle--
Wee Willie.
*  *  *
See:
My nose feels better in the air.
*  *  *
HARBOR
The winds
agitating
the
waters.
*  *  *
FOR
Four tubas
or
two-by-fours.
*  *  *
THE
The
desire
of
towing
*  *  *
These are not "read" but perceived with the complete simultaneity of recognition, the way we respond to street signs.
The verticality of "the/desire/or/towing" is pulled down from the titled capitals, as if words (or letters) had a weight, as degrees of magnetism. The definite article proposed as a linear pointer, pendulant--pendant--dangling--dependent. A diadem.
The isolation of the word "agitating" as a quality superimposed upon the fluidity of matter ("water") is nearly visual:
a -gi-ta-to  -  a nervous zig-zag  -  to move with an irregular, rapid, or violent action.
Anyone who has ever lain in snow, knows the curiously euphoric quality of that, indeed it may even resemble "the peace that surpasses" the ultimate fear of death itself. So we whistle a ditty--the purest, loneliest sound against the emptiness of a winter's day, whittling down the poem to a handy shape, a lullaby to a drowsy baby.
A movement for four tubas or two-by-fours: Can you hear the tuba's bwomp-bwomp deep-throated blare in there? What's in the sound of long boards dropped in air? If we set the poem as a quartet of four instruments, then it's a game of musical bridge, each horn playing off the other three. Two times two is four, but who (or what?) is it for? Nothing but itself.
This process of winnowing, or whittling away (of) what--then--are nonessentials, throws the remaining residual scaffolding of words (language) into stark relief: It becomes its own material, like inscriptions on stones, or signs in (neon) light. Marks in space.
When we get down to the level at which words are perceived "originally"--that is, with the least iterative baggage or modal contextuality--we get back to their purest first (best) sense.
Are the number of such possible reductions limited to the number of permutations available to use? It might seem so, given their elusiveness. But is that an illusion buried under the quotidian of layering? Can we peal back the skin(s) to find the empty center of our meditation? Is language the nut, or the shell?
Posted by Curtis Faville at 8:29 AM

every thing that you posit is
after all
merely

after the fact of the action!

just ask Paul..he
sure can play the notes!

Well, I'm not trying to re-write the poems, only to show some aspect of them that justifies their formality.

If you don't like talking about poems, you can just read them. But blogging isn't literature--it's nothing if not talk.

The "series one" etc is on the front cover of the wrapper only, not on the title page. Typically, when I'm listing books bibliographically, I'll restrict the title to what actually appears on the title page, ignoring the jacket copy etc. In this instance, I wanted to include the separate volume dates, to emphasize the chronology of LZ's development and expression of it in the 2nd volume. LZ could have eliminated the section divisions from the earlier two books, but chose not to. The copyright on my 1st printing volume of the Norton collected ALL is 1971.

I haven't checked: Did Johns-Hopkins eliminate the section headings for their collected shorter poems?

I got that Johns Hopkins
production:
Complete Short Poetry w
the Creeley forward

righgt in front of me..

if I got your question right

no Hopkins did not eliminate the headings and the dates are included..


I appreciate this line of your
particularily:

"The terms are reduced to primal meanings with the rapidity of instantaneous associations. (etc)"

and grew-up in The HOA had a crush on Charles Reznikoff who used to come to the home to the dances/socials and danced with her ..

she enjoyed going to the
poetry readings when Charles and Louis and others read..