The lead front page story in The San Francisco Chronicle this morning is "S-curve crash shows why changes needed". Reading this block type, you'd probably figure they were suggesting that the new S-curve structure on the East side of the Treasure Island splice of the two-part San Francisco Bay Bridge ought to be redesigned, and reconstructed, but you'd have been wrong. Caltrans' "changes" include lowering the speed limit, putting in radar speed-displays, and perhaps road-bumps to alert drivers to the approaching hazard.

The history of the Bay Bridge isn't complicated. It was constructed in the 1930's, to replace ferries (which was how people once got from Oakland-Berkeley to San Francisco and back). It was a sound structure, given the state of engineering in its time, and it admirably served its purpose. The lower deck originally was built for the old yellow "F Train" track, the rail system we had in place before the Teamsters Union persuaded Bay counties to scrap it in favor of upper and lower vehicle service. (We had to wait 20 years later for the idea to be resuscitated as the BART system!)

After the Loma Prieta Earthquake in '89, engineers told us we had to rebuild or retrofit the old bridge, lest a catastrophic failure occur in a really big quake (of the '06 proportions). Engineers and geologists in California have been conducting a little cottage industry of chicken little warnings for the last half century here, all doom and gloom about the dire consequences of not investing millions upon millions of dollars in structural retrofits and disaster planning. No one ever questions how effective or thrifty all this expenditure may be, or why the construction trades industry and engineering professions might have a vested interest in stirring up all this fuss. If another earthquake occurs, there is little doubt that structures built out of unreinforced brick, or sited atop (or near) known faults, will likely suffer considerable damage. But the fact is that the greatest damage from large earthquakes, here, is likely to result from fires and explosions in and around gas-mainlines. Installing a little triangular bracing on traditional foundation platforms in housing and business structures is comparatively cheap, but any earthquake strong enough to cause houses to shiver off their foundations would make such "mitigations" pretty irrelevant in the event. 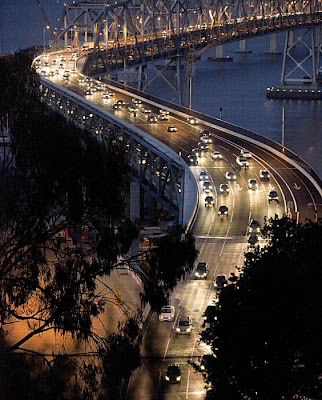 It may indeed sound presumptuous for a non-professional to question the advisability of building a completely new bridge to replace one that was constructed 70 years ago, but there has been preciously little debate about the issue, at least in the press.
The Bay Bridge "retrofit"--which turned out to be a completely new span on the Eastern section, has been plagued by design reviews, disagreements, delays, and construction snafus from the beginning. Now we learn, to our dismay, that the ultimate design includes a preposterous re-routing of traffic exiting the island tunnel on the East side away from the old eastern span hook-up, radically left to the new span, about 500 feet to the left (North), in the form of a violent "S-curve" immediately upon exiting the tunnel entrance. Experts have predicted significant delays of as much as 30% for all traffic flowing in both directions, as a result of this crazy design feature. In addition, the curves are so sharp, and unexpected, that they've already caused a number of serious accidents in the very short time since it was opened.
How could a professional team of designers and engineers make such a stupid mistake? Couldn't they see that building the new span 500 feet to the North of the old one would require a redesign of the connection between the North side of the island tunnel, and Western edge of the new span? This is a problem even a 5-year old could have foreseen in a nanosecond.
Caltrans has made blunders in the past. The connection between I-80 South to the Nimitz/580 split was botched 10 years ago, and has never been fixed: Drivers, especially those unfamiliar with that split, are forced to negotiate a rapid eccentric turn to the left. Scrapes and impact scars by the dozens along the concrete barriers are testament to this poorly conceived "solution."
There is little doubt that the new "S-curve" will have eventually to be rebuilt, somehow. The sooner this is initiated, the better off we'll be, in the long run. Resigning ourselves to another dangerous, confusing and inconvenient structural anomaly for another half-century doesn't make sense.
California drivers deserve better. We pay billions for our highways and bridges, supposedly designed to facilitate our advanced transportation system, upon which our economy and convenience depends. Why don't we get first-rate design and engineering? It's a mystery, and a disgrace.

I'm a little amazed sometimes at the number of topics on which you can speak always so competently and elegantly. Most of sites I've visited recently (including those of Silliman, Bernstein, et al) seem very limited, issues very seldom going beyond poetry & literary theory, as if these people have really lived in a bubble all their lives.

I'm glad Ed Baker brought me here. Always a learning experience for me.

Do you understand that the "S" curve is temporary, until the new transition structure can be built and tied into the new suspension bridge?

Your critique here seems to suggest you think it permanent. It's temporary. The ultimate new roadway near the tunnel appears, from the schematics available on-line to NOT have the "S."

There was NO engineering alternative to the "S" curve currently in place, other than to close the entire bridge for at least several months (instead of just one long weekend) and probably for several years until the new bridge was complete.

The temporary "S" curve is a doozy because drivers speed on the bridge, and the warning signs were -- until today -- practically non-existent.

It may still be a problem now that additional warning signs are in place, but let's hope not. But again, there was NO alternative, it is temporary, and the permanent new structure doesn't have the "S."

That may well be, but how in the world can this enormous displacement be managed, without some kind of extensive restructuring of the tunnel itself?

The plan to build the new span beside the old one (while it was still being used) necessitated an alteration of the splice to the tunnel opening. The original tunnel require/d/s a fairly sharp--but well structured--turn. But the new alignment will require two curves (hence, the "S").

Looking at what presently exists, it's doubtful that this displacement can be sensibly accommodated.

I concede we will not really know until we drive the new transition into and out of the tunnel when its finished four or so years from now.

See the route (very rough presentation, but it looks far milder than the current temporary "S") at teh following URL:

The State horribly mismanaged the warning signs for the temporary "S" curves, especially on the upper, west-bound, deck (which for reasons I can't yet explain is harder to negotiate than the one on the lower deck).

1) Among Caltrans doozies, you neglected to include the Cypress structure, which killed so many during the Loma Prieta earthquake.

2) People drive too damn fast. Too fast for the curves, the onramps and offramps, the telephones, the radios, the tires, the width of the lanes, the condition of the pavement. Too close together, too. The only way to slow them down, I think, is to remove pavement altogether and return to gravel roads.

just don't get the two ends to meet in the middle in a straight line... so this is the "solution" to tie things together..


which boosts our economy more $$$$ for petrol products and more for auto repair shops.

Know where the concrete came from? (China?) or the rebar/ I-bee-ams? (India) or the labor?
(Mexico?) or the money?

and whta's gonna happen when a 2-sami or cat 5 hurry-cane hits? and I betcha that chunks of concrete are already dropping off

Actually, I'm a negative growth advocate, so expanding hiways is pretty far down the list of my order of priority. Build them, and the tract developments will flower! But I do think that if we're going to pay for these things, and use them, we at least should get good engineering. Don't you think?

Automobiles sold in the last 25 years have all been about zippy get up and go. "Zoom zoom zoom" as the commercial goes. Small, light, high-torque engines, etc. Encourages people to drive way too fast, and recklessly.

2) Tailgaiting at high speeds. This is, in my view, the major cause of accidents on the freeways. Anyone who "hugs the butt" of the vehicle in front is begging for a collision--they literally have NO reaction buffer. The Hiway Patrol does NOTHING to stop this, and routinely tailgates itself! Why is it that no one seems to mention this, or enforce it?

3) Aggressive lane changing. Squeezing between one lane and the next in dense traffic, often two or three lanes at a time.

4) Too many trucks on the hiways. Why don't we use our train system more for shipping? Wouldn't that get rid of a lot of expensive, and wasteful road space, and energy use? Trucks purportedly also tear up the roads at an accelerated rate, but pay very little in use fees. Increasingly, trucks cause more serious collisions. Get them off our roads!

5) People enter curves way too fast, believing (I guess) that modern cars are better designed to take centrifugal stresses than older sprung chassis. But in wet weather, especially, this can be a recipe for disaster. Hydroplaning occurs in precisely these situations.

6) Have drivers forgotten that meeting on a steep hill, the driver coming up has the right of way? Seems so. It's gotten so bad, that when I stop to let a car approaching me from below pass, the car behind me tries to pass me, blocking the upcoming vehicle. In Europe (except in Italy, where the law of the jungle prevails) drivers take pride in courteously letting others pass.