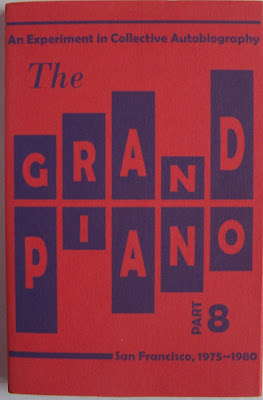 In a previous comment on the Grand Piano project, I asserted that the unpleasant reality, the embarrassing but revealing event would be precisely what readers of this "collective autobiography" would NOT get. The construction of identity involves the favorable organization of experience into an aesthetic artifact, fashioned out of preferred models of an ideal self-regard, as well as fear, loathing, conceit, and all the other mental influences that affect individual memory.

In Grand Piano 8, Watten speculates generally about the relationship of geography and poetic inspiration, of the connection between what he calls "oceanic feeling" (the West)--associated with the San Francisco Bay Area, symbolized by the Golden Gate Bridge--and the quotidian facts of his, and his co-conspirators', lives.
As an obfuscation of identity, the essay conceals all the relevant facts of a given life, in preference to abstract conceptualizations. The dominant tendency in Watten's work has always been the alienation from self, a romanticized de-personalization played out as surreal tapestry, or aesthetic disorientation. We come to realization through unfamiliar or mysterious phenomena, presented as an intellectual nightmare: Metaphorically as Ishmael, the astonished witness of a fallen world. In Melville's Moby Dick, the narrator Ishmael tells the reader that he has turned to the sea out of a feeling of alienation from human society. In the last line of the book, Ishmael also refers to himself symbolically as an orphan. Watten's spiritual alienation from his American roots--coming (backwards) from East to West--
"The image of myself at age twelve, returning from the East, everything yet to come, through the Golden Gate."
--condenses as a desire for self-understanding through the experience (and use) of language--"looking not outward toward unbounded infinity--but in". The natural expectation from such an enterprise ("looking...in") would be of an exploration of self through a concentration upon family, relationships, friendships, archetypes, childhood, marriage, parenthood. The pattern of first adopting, worshipping, then rejecting archetypes of ideal behavior, would be an inevitable symptom of the alienated self, preceded or accompanied by unfavorable Oedipal outcomes, sexual obsession, colossal gorgons of ambition and jealousy, and primitive infantile rage.
The refusal to come to terms with the hidden agendas of self and experience is the hallmark of all autobiographical writing. Maturation in most instances is the fashioning of a shield of protection against the revelation(s) of unwanted exposure(s). Hence, Watten asks us to accept the version of himself as a fully formed projection, in medias res (in the middle of a literary "scene" (milieu) in the San Francisco of the 1970's), without a past, without a personal identity, without, in effect, any of the intimate sentimental baggage we associate with real life.
What didn't occur to me initially in my reading of the Grand Piano was that Watten was its progenitor and de-facto editor; that had I known this, I would have better understood how its content was self-directed. What the original program hinted at, was the possibility of a synergistic interaction among primary players, dedicated to a revelation of an interpenetration of life and art that might suggest productive patterns or frameworks for creative activity. But inevitably, invariably--precautions.
"The dispersal of the San Francisco Language school began with its poetics of elsewhere. Oceanic feelings from which we might try to stage a return, from originary displacement to retrospective construction--but it would never be the same."
Already, nostalgia replaces truth, and the self, coated in its synthetic protective skin of illusive language, gloats privacy.
One of my early poems, paraphrased here from its original imitation-of-Creeley format, read:
"My name to me is a kind of blank, empty place in the air. When called aloud it is as if a voice surrounded it, a pause before sound followed, falling. The Greeks had a deity, "Echo," a nymph who fell in love with Narcissus, but was by him repulsed."
My own spiritual orphanhood, which began with the revelation of my adoption at birth by my Mother's second husband, produced similar aesthetic and literal dislocations. The desire to construct a preferred, viable identity out of the shards of rejection and persecution had clear affinities with Watten's bitter, alienated isolation, his need for place, friendship, purpose.
Watten's concept of a "non-identity"--a negative force in the dialectic triad of becoming a person through the defining process of writing, leads directly to the form of his work. Writing thus becomes the preferred mode of experience, where all significant alternatives--of acceptance and belonging, work and play, hunger and sustenance, boredom and interest, truth and falsehood--are mediated. Since writing is by definition a public act, a telling revelation, the persona of his work is always in consequence suppressed, in favor of a covering fig-leaf--
"I apologize in advance for the nature of the confession that must be elided here. Condensation, displacement. The moment memorialized in a missed encounter preserves the advantage that itleaves everything yet to come."
Nothing ventured, nothing gained. The refusal to describe, to elaborate upon the underlying issues and relationships, which characterizes the Grand Piano accounts throughout, guarantees that the result will be a total fulfillment of its creator's intention. Ironic flirtations of the above kind are like footnotes reminding us of the subtext. Lift up the skirting avoidance and what is one likely to find?

Watten pays lip service to the Rilkean notion of a transformative poetics: "...it is never later. It is always the moment of the act." Which echoes similar, earlier imprecations from his poetry. But writers are not born complete, finished, from the head of Zeus; they have pasts, they have lives--in order to "change [your] life" you must first learn to accept who and what you are, to come to terms with it. That is the first duty of autobiography, the stated purpose and meaning of the Grand Piano project.

In rendition, interrogation techniques presume that a subject will not "break" (or reveal substance) until he realizes that there is no alternative to capitulation. The self's stubbornness (refusal) to reveal is probably on an equal level of intensity as that of any persecuted detainee. If creative endeavor is about the search for truth, then autobiography is about being given the permission to confess, first to oneself, then to a supposed (imagined) audience. The irony, of course, is that almost anyone inevitably loses track of the truth of their own past, even when they're committed to understanding it. Either you belong to a place, or a people, or you are an alien. Otherwise, you must find it (like Tom Jones, a foundling). A creative identity, again, is not to be confused with an actual one. The allure of idealized versions of oneself is endlessly seductive (think of Byron, Wilde, Kerouac, Hemingway, etc.). Until or unless the writers of the Grand Piano project are willing to address the deeper levels of their consciousness, as well as the difficult details of their mutual (and all other) relationships, what they have to tell us about their Grand Piano days will be of only passing interest.
Posted by Curtis Faville at 8:32 AM

I tell u if Pin Shu Nay the grat student Pee Ache Dee student/candidate ain't reacting... well. this is merely a crock of crap!