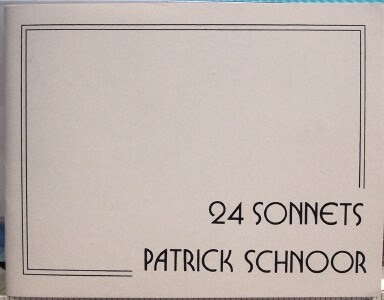 As his literary inferior, from our earlier days as undergraduates, I mourned the loss of a considerable talent, even as I envied his potential. But nothing had come of it: The best contemporary of my undergraduate days had fallen into a sand-trap and seemed unable to find his way out. I didn't know what to suggest, and Patrick seemed uninterested in cultivating our friendship further.

I lost track of him about 1979, as our lives diverged, in my case to a 9 to 5 job and the duties of fatherhood and paying a mortgage. Over the years I wondered what might have become of him. Had he resumed writing, or found his way into some kind of stable life?

In the late 1990's, I thought I'd located him on the internet, with an e.mail address at a Silicon Valley computer corporation, but the message I sent bounced back. Then, about three years ago, browsing his name on Google, I discovered, via the Tulare County Obituary Index that he'd died on December 6th, 1997. Someone had posted a brief missive online, indicating that Patrick had been a part of some kind of extended treatment program for substance abuse. I was so saddened by this, I was beyond words. Previously, I'd lost another very good friend from my early college years, named Michael Lamm, a student underground radical, whose car had been found on the Golden Gate Bridge with a suicide note.

The Sixties were hard on some people. They may have been the years of positive change and flower power and love, but there were casualties as well. Patrick was a very smart, very sweet man with a big weakness, which eventually did him in. I miss him still.
In the coming weeks, I hope to post some of Patrick's poetry on this website--both the sonnets and some minimal works which I published in L Magazine.

Posted by Curtis Faville at 7:23 AM

Why again were drugs such a good idea back then?

It seemed to me that drug use and Marxism were both utopian opiates that were to your generation what Moloch was to another.

The poems remind me a little bit of Edwin Denby's sonnets. I don't know how widespread that sonnet notion was -- take a classical form and fill it with American daily reality to get a jarring effect.

It was an interesting idea. Denby did it better, but he had a lot more time to work on it.

P.S. I hate looking people up and finding an obituary.

I have had that happen to me several times, too, never with good friends, but with people I was trying to contact for various reasons. One of them used to work at the university I was at in Finland. He got fired, and the only lead I could find was a funeral notice. I had wanted to send him my novel, Temping (set in Finland at the university we both worked at). I was about a year late.

I see here once again your tendency to associate a literary work with some politically charged aspect of its author's life.

Patrick wrote his sonnets long before he ever got into drugs. Drugs don't taint the writing. Drugs got in the way of his career.

If Ginsberg had never addressed his own homosexuality in his work, there'd be no reason even to mention it.

Connections between the work and the life are usually considered a badge of honesty. Would we feel better about people if they studiously avoided personal references in their work? Would we like it better if Whitman had simply lied about his sexual proclivities in his poetry? The work and the life are, in the end, inseparable, but they may not be a matter of public (or critical) concern.

Patrick never addressed his drug obsessions in his poetry, but he might have, if he had not abandoned his writing career. It's probably a cautionary tale about the temptations of luxury and excitement. The seamier side of indulgence. But Patrick's appetite for experience is clearly related to his drug experiments. That has a long history in literature, going back to Rimbaud, etc.

Marianne Moore didn't need drugs. she saw NYC as accessibility to experience. But she wrote many of her best poems in Carlisle. I think it's sad to read about this waste of talent. There must be a moral of some kind to this story, or what are we to make of it? I, personally, see it as a mistaken aspect of a promising generation that killed itself with Ginsberg's ideas. He tried to rally his generation around the previous generation as a kind of Moloch. But to my generation, he was Moloch the Molester.

(I would not have allowed KO's comments)