Too often these days, we tend to think of the American poet Robert Frost [1874-1963] as a grand old man, white-haired and crotchety, conjuring gnomes and twinkling amusedly under the glare of his public's admiration (and four Pulitzers), durably living far beyond his time, a throwback to an earlier age of crusty stubborn Yankee practicality and tested country wisdom. 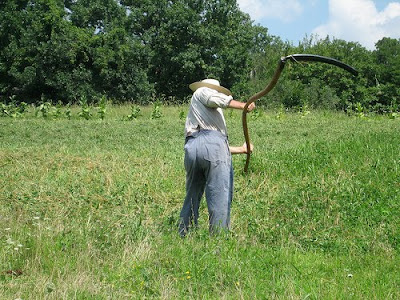 But I like to think of Frost the younger man, prideful, often frustrated and angry, pondering alternatives, ambitious and secretly egotistical. Like any good poet, he was preoccupied by mysteries, conundrums, contradictions, as much as by love, death, and the state of the world. No one who wrote poems as deceptively casual in their phrasing, yet as tightly controlled in their arguments and conceptual integration, as he did, could not have deeply desired to pour everything of himself into the effort. Like Pound, and Stevens, and Moore, Frost's work was the man. You can struggle so fiercely against the limits of language that the contention becomes your own daemon. Writing poems can't have been "easy" for Frost, but he resisted the impulse to let the poems bear the full weight of this complexity, insisting instead that they resonate through straightforward, accessible vocabulary and style. 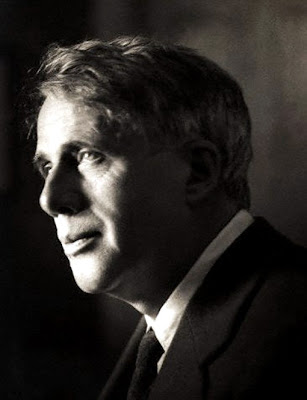 Frost's poems--at their best--seduce you into thinking about life, through the most familiar of subjects, the most everyday things. On one level, they are like charming post-cards of New England, picturesque and ruminative, wagering friendly bets against the possibility of mutual understanding. That is Frost's superficial charm, what makes his work both honest, yet strategically disarming at the same time. As he grew older, he made more use of cute, logical similes, often slipping into light verse (as Auden did). But it's in the early work that his clearest, sharpest efforts lie.
An early poem that has always seemed to me exquisitely simple, yet quite profound, is--
Mowing
There was never a sound beside the wood but one,
And that was my long scythe whispering to the ground.
What was it it whispered? I knew not well myself;
Perhaps it was something about the heat of the sun,
Something, perhaps, about the lack of sound
And that was why it whispered and did not speak.
It was no dream of the gift of idle hours,
Or easy gold at the hand of fay or elf:
Anything more than the truth would have seemed too weak
To the earnest love that laid the swale in rows,
Not without feeble-pointed spikes of flowers
(Pale orchises), and scared a bright green snake.
The fact is the sweetest dream that labour knows.
My long scythe whispered and left the hay to make.
_____
To anyone who has done physical labor, in a rural setting, this has a familiar ring. Physical labor outdoors, in late Summer or early Fall, is exhausting. Felling hay with an old-fashioned scythe (the symbol of death for hundreds of years) is a back-breaking task. On hot afternoons, the sun beats down on your back, you sweat profusely--you may even become slightly faint, even see spots before your eyes. Almost everything Frost describes in his poems-especially tasks associated with farming, or rural life--becomes a test case, a charming souvenir example, acquires a symbolic significance on another level. But he's speaking here about a state of mind with a clear physical reality--the train of thought in the poem follows a logical sequence in keeping with the sensual (and sensory) activity itself.
The oppressive heat is associated with a lack of sound, the context within which the scythe's "whisper" is heard. Heavy breathing, the pounding of one's heart, and the swinging motion of the long handle of the scythe as it swishes through the stands of high grass, like a mortal pendulum keeping the time of one's life. The speaker meditates upon what this "sound" might signify. It signifies heat, the lack of sound, of the "labor" which "laid the swale in rows." Oddly, in the 12th line, a dangling predicate--"and scared a bright green snake." Are we to assume that this snake is scared by the scythe, or simply its being disturbed from its natural hiding place in the grass?
I prefer to think of the snake and the scythe as conveniently trite examples of Biblical analogy that really have little to do with the distillate of the poem's true subject, which is expressed in the miraculous line that follows: "The fact is the sweetest dream that labor knows." If fact is a dream, then labor is the mere mechanical performance of all matter, animate or in-. In the end, all labor is a kind of futility against the backdrop of universal emptiness. The universe is a grand machine, fascinating in its parts. The secret of its being, of its purpose, or the ultimate equation of its function, lies beyond our understanding. We may "dream" but the most fundamental achievement of our cognition may be an acknowledgment of "fact"--of what is, without purpose, without ultimate motive.
Labor inspires this sense of futility. We may enjoy being nature's instrument, or the useful servants of a higher power, or simply the vehicle (the expression) of our own drives. "Anything more than the truth would have seemed too weak/to the earnest love" that drives the scythe. Ultimately, is "earnest love" the highest inspiration of our drives, our labor? Frost seems to be implying that this "earnest love"--which scares the snake (evil) from the garden--is the highest good of which mortal men are capable. If the scythe is death, whispering of silent heat and idleness--then simple work may contain the riddle of beauty and ingenuity, because work--the mechanical riddle in a nutshell--that is, animate existence--must contain the riddle to our purpose. A quaintly New Englandish notion, perhaps, that work is its own best recommendation, the whole ball of wax.
This is a sonnet, with the rhyme scheme A/B/C/A/B/D/E/C/D/F/E/G/F/G, iambic pentameter--about as old-fashioned as you can get. In Frost's hands, it has that familiar, casual approachability (ugly word, but useful here) which is the hallmark of many of his best poems. Superficially friendly, "neighborly" but intensely serious in its particulars. Economical of means, precise, a little dreamy, but grave in its underlying meditation. Vintage early Frost.
Posted by Curtis Faville at 2:04 PM

you've just written my next lesson Frost poetry lesson plan.I've been hoping myself for an 'Aesthetics' rebirth of sorts in Canada, one that celebrates our own rural poets/poetries for which Canada used to be particularly celebrated(Purdy,Acorn, F.R.Scott,etc).

It is nice to read poetry whose rewards always come with appreciative readings like this.

Once Upon The Pacific is a poem I associate with the early Frost, partly because he was a West Coast poet for many years before he settled upon his role as the New England poet. When I taught Once Upon the Pacific at a school in Tonga, the more sophisticated of my students were young people who had grown up in broken families in California or Utah. They came back to the islands to live with relatives and learn proper Tongan as an alternative to encountering American criminal justice.

I wonder if the canon could be split into rural and urban.

If so, Frost would be among the rural faction. Of course he spent time elsewhere, but what I like about the poem is how grounded it is. Honestly nothing of Frost's reallys sticks much in my head although I've read most of it. The haunting moment where the horse pauses at the crossroad, a few others -- the boy who lost his hand.

It strikes me that people in the cities lose touch with reality, and instead put up a fog of signs, and that that is the origin of the LANGUAGE poets. Language as divorced from experience.

With more rural writers -- Frost, or Snyder, you have real experiences described. I think Frost is criticizing poetry that isn't grounded in the actual in the lines:

It was no dream of the gift of idle hours,
Or easy gold at the hand of fay or elf:


But what do I know? WCW seemed to be going back to basics when he wrote about the wheelbarrow. A lot of those guys in New Jersey were in their own way trying to go back.

I am thinking of Kenneth Burke.