The World of Donald Evans

As a boy, I was introverted, shy, and fascinated by miniaturization. I had an active fantasy life--not the kind often referred to these days when people speak of Tolkien and Rowling fans--i.e., imagining dwarves and munchkins and complex, cozy Medieval societies--but I tended to think small: Armies of rubber men--WWII soldiers, cowboys and indians and lincoln log forts on the frontier, frogmen, spaceships, cavalry, etc. Later, it became postage stamps, chemistry sets, model airplanes. Following the popular examples of the time, I subscribed to Boy's Life, The National Geographic, The American Geographic Society ("country" booklets by subscription, with illustration stamps to paste in). Typical American childhood accoutrements. 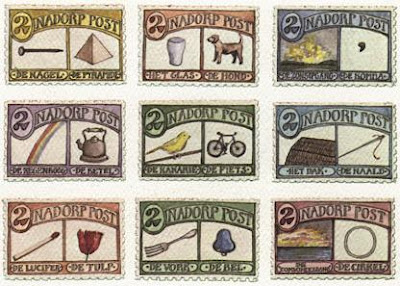 I belonged to the first wave of post-War American babies ("boomers") who overwhelmed the American public school systems, and, later, the American college and university systems.
Living in relative physical and cultural isolation in suburban America, I, like many of my contemporaries, imagined the world through the tiny window of my hobbies. Countries had colors. It was a snapshot world, vicariously offered up as confirmations of the superiority of our middle-class life.
Stamp-collecting presented a specific, strange template of the actual world, which had begun sometime in the early 19th Century with Britain's issuance of the "penny black" bearing the profile of Queen Victoria. Postage stamps had a practical side--to facilitate the payment for postal duty on letters and parcels--but they also had a purely commercial-aesthetic side, as governments in small jurisdictions issued special elegant stamps designed to attract collectors and investors (as with coins), e.g., Monaco, San Marino. There was a lot of history in stamp collecting: Colonial occupations, Fascist regimes, religion, sports, heritage events, etc.
Still, postage stamps weren't like the "real world"--only its vague, eccentric reflection. It probably never occurred to me then that an imaginary world might be constructed out of an adjunct collection of fake postage stamps; one rather "like" the real postage stamp universe, but wholly fictitious:  Invented countries, currencies, events, scenes.
Could such an invented "world" made out of imaginary postage stamps be as convoluted and ambiguous as the "real" postage stamp universe?
It turns out that one of my generational contemporaries, Donald Evans, who was born and grew up in New Jersey (1945-1977), had been inspired to do just that. Evans, a precocious and precious-minded child, conceived of and created his first sets of invented postage stamps in early adolescence, but abandoned the hobby to study architecture at Cornell. As his career in architecture developed, he realized that he was more interested in perfecting a personal artifact than in designing spaces. He tried making abstract expressionist canvases, painting theatre sets. Answering some deeper need in his nature, he abandoned design, and, on a whim, traveled to Holland. There, perhaps inspired by the same qualities which had interested the great Dutch painters such as Vermeer, Hals, de Hooch, van Eyck, etc., he resumed his imaginary stamp art production, further elaborating his vision, inventing more exotic "foreign" locales, and exploiting specific interests and daydreams, relationships, and personal fetishes--creating, in effect, a wholly consistent and perfected private world, which he recorded in his "Catalog of the World." This shadow world of make-believe and fussy detail, with its emphasis on craft, reductive scale, is like a childhood fantasy. 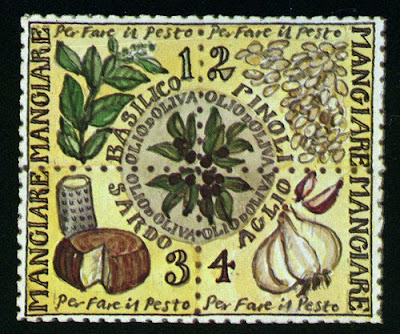 Here are childhood's fascination with the small, the toy-like; the unique or reproducible copy; the timid investment in safe versions of "real" adult life; the interest in manageable strangeness, the contained exotic; ultimately in the preservation of (or creation of) the innocence and safety of protected childhood itself, as the regressive symbol of arrested personality/development.
The World of Donald Evans was published in 1980 by Willy Eisenhart (shown below). 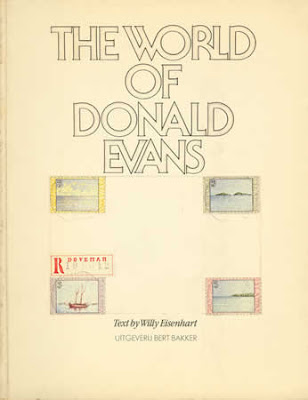 Our fascination with Evans's work--its preciousity and cuteness and obsessive taxonomic elaboration--has other dimensions as well. As the expression of a craft (copying traditional engraving technologies, which once gave postage stamps their qualitative intensity and finish), the work is impressively vivid, varied, and sweet. 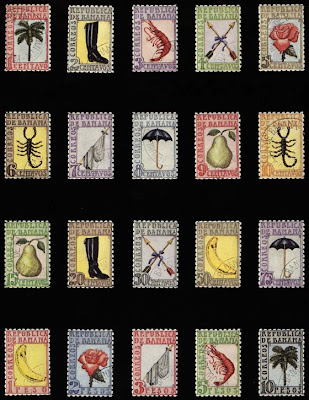 In Evans, we see the same obsessive escapist tendency as in Darger--a closed, perfected world of idealized objects, situations, relationships, a world with its own laws, preferred terms, and theme-park transparency. Also, perhaps, a little of the elaborate Proustian tapestry of edited experience. 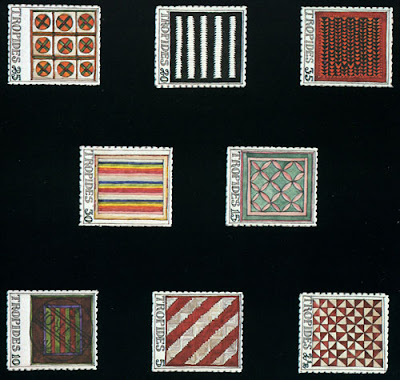 It is also a world of exile, of spiritual and personal alienation. The imaginary "exchanges"--of sending and receiving, of passages and transformation symbolized by post-marks, of communications with other (imagined) dimensions and remote eventualities--of commerce and affection perpetually post-poned, relegated to ineffectuality.
Evans's stamps and postcards are like the marginalia to an ambitious unwritten fantasy narrative, a footnote to an alternative universe very much like our own, but cleansed of the messy, poisonous, destructive complexities of actual human existence. 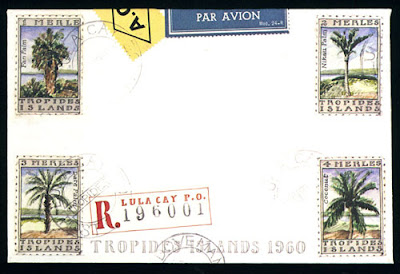 Ironically, Evans died in an apartment fire in Amsterdam at only 31, a victim of a real event more terrible, and improbable than any he might have imagined for himself. It's been over 30 years since Evans died, but his work appears as fresh, as unintimidating as it did when I first discovered it in the early 80's. There are a number of images floating around the internet, for those interested in seeing it, but the monograph by Eisenhart is the best introduction to his work.
Evans's still-born career--like the arrested fantasy world he created--will always remain symmetrically closed, like the life he chose for himself, just a little bit smaller than the real world we live in.
Posted by Curtis Faville at 8:39 AM

I discovered (in Canada's 'National Post') that a U.S. postage stamp will pay tribute to soldiers, Canadian and American, fallen in the War of 1812. Eight Senators said as part of their petition to the U.S. Postal Service that the war "was significant in the formation of Canada and the Canadian identity." I find this idea of an 1812 commemorative stamp a way to acknowledge real commerce between U.S. and Canada.

But if placed beside any of Evans's fictionalized stamps, would it seem out of place? a mongrel artifact? Would a stamp that conceded defeat to the enemy, seem too pedestrian, or too blatantly politicized,for art of this escapist kind?

Far from the "world of exile, of spiritual and personal alienation", here's perhaps the more tangible (less fantastic)face of postage stamp iconography: indeed, the face of globalization itself. I wonder if art, in even this miniaturized form, can be seen as anything but a means of expediting business. The gesture of sending to exotic places doesn't seem nearly as surprising if the media are words, colours,musical notes instead of stamps.

I guess what I'm saying is that I've never thought of stamps as a space for Art.

If you've never been obsessed with collecting, perhaps "stamp art" may seem nonsensical.

Evans's work expands and extends the concept of the canvas--literally anything may become the surface upon which art is practiced. There is a long tradition of the miniature, which his stamps are a part of.

I think I sense the same "collector's" impulse in Evans's art stamps I do with real ones. This is irrational, but nevertheless a real emotion. They're like perfected versions of real things.

You and yr poetic palsies should start a "Friends of Kirby Olsen" blog--like to help with his psychosis, mental health costs, treatment etc.

I Stumbled across your blog when I was looking for information about Donald Evans. I like your blog and the information it provides.

Glad you discovered it.

It's weird how people will find blogs I wrote hundreds of iterations back, and comment on them. The vast majority of comments originate within a few days of the initial post, then drop from awareness into obscurity. Some of my posts continue to be discovered, but most, I'm sure, are never visited after their initial posting.

Evans was cool. Every time I go back to it, it rewards my interest. Too bad he didn't live to elaborate his vision. Where might it have led him?