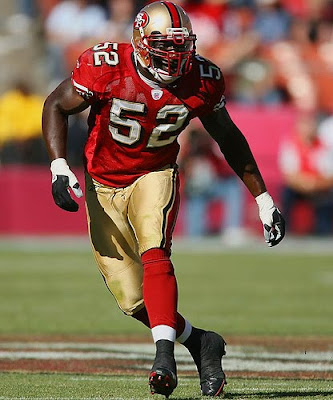 The 49ers latest win against the hapless Chicago Bears raises more questions than it answers. I expected the 49ers to win, given that the Bears have a very weak defense, and the 49ers have what appears to be (despite the Atlanta debacle) one of the best defenses in the league, strong against the run, and very good against the pass.

Last night, the problem appeared to me to be the offensive game plan. Singletary had insisted over and over again that he wanted a traditional ground-game based offense, emphasizing a straight-up, up-the-middle approach, with Gore hitting off left or right tackle on 70% of the plays. Using the run to set up passes. The season began with Hill at quarterback; his season stats bore out the overall strategy, and the offense was effective, if quite conservative, in its first 4 games. Following a poor showing against Atlanta in week 5, coach changed horses in the second half of game 6, and has stayed with Smith ever since, completely abandoning his original strategy to suit Smith's different skill-set. But the team's offensive coordinator seems not to have gotten the message. Jimmy Ray's game plan last night stunk. The 49ers gained a total of 216 net yards, against 350 for the Bears. Had Bears quarterback Jay Cutler not thrown 5 (!) interceptions, the Bears would almost certainly have won handily.
The frightening thing, when you look at the character of the teams the 49ers have played the last two weeks, is how mediocre the competition has been. These are teams, at least on paper, the 49ers should beat by thirty points! With Crabtree and Davis, Gore, a wide-open passer like Smith at the helm, this team should roll over quotidian defenses. But they don't. What's the answer?
1) Smith still remains undeveloped. A head case. He seems to lack the important skills to succeed as an NFL QB. He has poor eyes downfield, he has poor "sense" of the rush, he often seems unfocused, as if his mind wasn't really in the game. When he's in, the team lacks punch, desire. He's uninspiring. The look on his face, in the huddle, on the sidelines, is blank. Where's his attention? Maybe he needs therapy.
2) The offensive game plan needs an overhaul. Running Gore up the middle on first and second down, then trying sideline or quick slants on 3rd, over and over, game after game, is a bust. No team that can't put up 250 yards passing in a game, will have much of a chance to win. This isn't an era when 175 yards rushing with 175 yards passing, in a game, will get it done. Almost any team can score in a minute and a half--so playing to win by 2 or 3 points in close, low-scoring, games is a recipe for disaster. Had Cutler not folded on the last play of the game last night, the 49ers would probably be staring defeat in the face again.
The true score--the score that the respective teams "earned" based on their actual performance, minus turnovers--was Bears 28, 49ers 13. But you can't depend upon turnovers by the opposition to win. The 49ers played miserably on offense. The 49ers have a superior defense, but you can't expect them to hold other teams to a couple of field goals--that's just unreasonable.
You'll take wins any way you can get them, but this wasn't really a win. It was luck. God help this team when it goes against Green Bay, Arizona and Philadelphia. Ironically, the team seems to play at a level that matches its competition (except in the Rams game). Any time you get five interceptions in a game, you have to win going away, not squeak through.
Posted by Curtis Faville at 9:01 AM