Fats Waller (born Thomas Wright Waller in 1904) was precocious, musically, and began to play both the piano and the organ at an early age. Despite living only to the age of 39, he produced a wealth of jazz recordings and compositions, many of which are considered classics. Fats came of age right at threshold of the 1920's, and was thus positioned historically to participate in the flowering of the first great two decades of the Jazz Era. 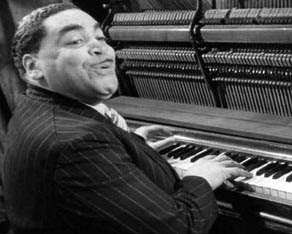 Waller was primarily known as a pracitioner of "stride" piano style jazz, among a generation of innovators which included James P. Johnson, Willie "The Lion" Smith, Art Tatum, as well as several later figures who also specialized in Boogie-Woogie. Stride is characterized by an "oom-pah" base figure in which the left hand bounces between a base note or "oomp" followed by a chord further up the scale, the "pah!" Playing stride is tough to master, because you can't concentrate on the movement and still play the melody and variations with the right hand. The left hand leaps back and forth, hitting the chords with authority, making a lovely jazz 4/4 rhythm for the right hand to dance around. There are variations on this basic format, but classic stride is about the "walking" or bouncing base. Rag-time--familiar in Scott Joplin tunes (made famous by the movie The Sting) also had a slower, more stately four beat walking base, but with less emphasis and less variation in the melodic arrangements. 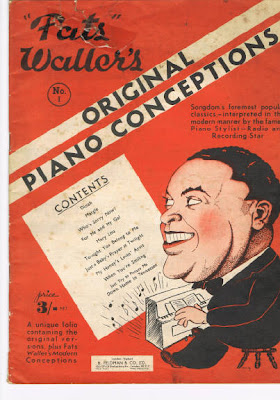 Stride, as a style, was very exhibitionistic--its pracitioners vying for the fastest, most driven, assault on the keyboard. But Waller, unlike his contemporaries, had a deeply lyrical aptitude, and his pieces are much more tuneful than merely cadenza-like. Also, Waller was among the first to use small band groups to achieve a sound at once intimate, and large. Since he could do so much with the piano--make it growl, or slam, or twinkle, or flutter, he needed much less in the way of side-men to fill in the spaces. He was never essentially a band-leader in the way Ellington or Armstrong were--the use of brass and percussion to enhance an overwhelming keyboard, was a fairly new idea in the mid-1930's, but Waller did much to pioneer the small combo as a unified effect, innovations that later star jazz pianists would turn into a regular tradition (Cole, Brubeck, Peterson, Garner, Shearing, etc.). 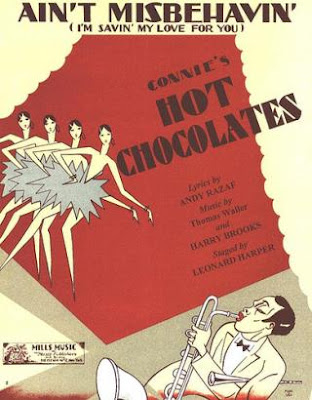 Waller was also something of a "novelty" performer, too, often making wise-cracks and asides during performances. This aura of silliness sometimes seems almost a self-deprecation, as if he felt he could only be accepted as something of a ham, instead of a serious composer and arranger. Waller basically has three modes: Ecstatic delight, mugging madcap, and deep blues (which can be seen in his early performances on the organ). Waller's career bridges the era between small-time "joint" gigs, and the larger audience available through recordings. His style is suited to small, intimate settings, but it's big enough to hold its own in a concert hall.
Dick Hyman has made recorded "perfected" performances of most of Waller's biggest hits, and these clarified versions--though a trifle academic--are the best contemporary interpretations, for my money. But the vintage sets, most of which are still available in later media (such as CD) give a strong sense of what a live Fats session must have been like. Waller was a boisterous man, a big eater and drinker, full of lively humor and irreverent charm, and that comes through as well.
Waller's innocent sweetness, and his sense of fun, are perfect antidotes to some of the grim, bleak, alienated sounds of Fifties and Sixties jazz. Waller died in 1943, just when Big Band Swing was at its height, at the very young age of 39. It's probably idle to imagine what he might have become, had he lived another 20 years, into the 1950's. His style seems to belong to another era. America is lucky to have had such talent in its midst. Where is this exuberance and sweetness today?
Posted by Curtis Faville at 12:54 PM

Waller's innocent sweetness, and his sense of fun, are perfect antidotes to some of the grim, bleak, alienated sounds of Fifties and Sixties jazz

Interesting, and I agree he's a great player--tho' not quite Art (as in Tatum). And sweet, OK, tho' not sure "innocent" fits Fats (or his music, or Stride).

Later jazz, ala 50s/60s, may have been alienated to some degree as you claim, but it also moved beyond the stride-speakeasy sound, did it not? Brubeck, Evans, Shearing, even Peterson bring a certain romantic sound to jass (probably from Debussy, Ravel, russians etc). Ellington at times seemed to moved away from the speakeasy sound towards modernism...

Then we could just listen to Claude and Scriabin--if not Schubert, or Freddy Chopin--and get most jass harmony. Scriabin actually had already moved beyond jass/romantic harmony and was doing wild atonal sounds 1900 or so, tho' his early musick was a bit conservatory or too "pianistic" at times...).

My point here isn't to denigrate later jazz pracitioners, but to mourn the fact that Waller's spirit--which seemed characteristic of a lot of jazz of that time--is lacking today.

A lot of what makes the Beatles good, was this spirit of light spirits. They could do heavy, but they could do light, as well. Comic relief.

during (almost all of) the 30' it was called HARRY's

he had a piano player my dad used to tell me played "just like Fats Waller" name "Hoggie" Walker
cause he was
as my grand-mother used to add "a PIG!"

Hoggie used to 'back up' Billie Holiday when she sang at the club..

there are some movies with Fats Waller in them.. WHAT A SMILE!

I guess the line about ends with Fats Domino

"where is this exuberance and sweetness today?" right here in my mind/heart...


and I continuously re:visit.... things:

Ella also had some "sweet" stuff about her

before Money-Money-Money took over driving the bus.
now we got Fear controlling the pedals.

maybe that's why no exuberance, joy, and sweetness in evidence today..

Well, I'd ruther listen to Waller-- or Ellington--than to "smooth jass", or most fusion, but not ALL contemporary jass is smooth -J. The Marsalises are still playing (and fairly trad. sound at times).

A lot of what makes the Beatles good, was this spirit of light spirits. They could do heavy, but they could do light, as well.

Im not a Beatless fan too much, and usually preferred a heavier sound (say Hendrix), tho' I agree the heavy rock or jazz/be bop can get old too. That's why a sort of blending of high -brow and low- is needed! Like say Steely Dan. No? A bit pretentious perhaps, but quite well-crafted, and with real jazz influence.

That said, ah like moody musick, ala Bill Evans (or Debussy's best... ).

How about Ran Blake?