Emmet Gowin [1941-] was originally a student of Harry Callahan's, and the presumed association seems apt, judging from the work alone. From the beginning, Gowin displayed the same reverential regard for family and a self-contained, attentive interest in immediate surroundings that had characterized his master's oeuvre. His first major monograph, Emmet Gowin Photographs [Philadelphia Museum of Art, Bulfinch Press/Little, Brown and Company, 1990, published on the occasion of a major 3-year traveling retrospective exhibition], was almost revolutionary in its application of fine-focus large format images, to specific subject-matter: Family, body, house--the textures of intimate life seen through encircling wide-angled prints in which the diameter of the lens is placed "inside" the field of the rectangular negative space, surrounding the image with a haloed blackness. This affectation intensified one's perception while affording a sense of visual interiority--as if looking through the eye at reality--from inside one's brain, a sense of containment that established a metaphorical separation at once vicarious and sanctified. This duality--though achieved at the risk of embarrassment or invasiveness--is the key to one aspect of Gowin's vision. 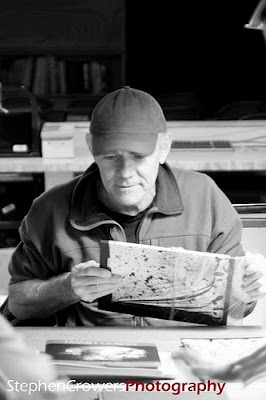 Another aspect is a perfected, ideal vision of a pastoral seclusion, of a rural paradise in which nature, and man, co-exist in a mutual, rounded whole. This preferred, imaginary precinct is rather like a snow-globe, a spherical, liquid view of a post-card setting, totally artificial, synthetic and precious. Gowin's circular landscape images exist on the spherical surface of the eye's lens, eliminating the distance between subject and viewer, in much the same way, I imagine, that stereo-viewers once captured people's fascination. 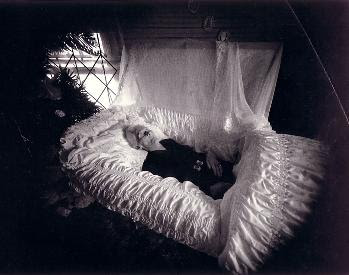 The awed reverential regard for a departed soul, a literal dead person, in this Portrait of Rennie Booher [1972], is heightened both by the extreme clarity of the large-format lens, and the delicate ruffles and gathers of the coffin-lining, which spread out from the body, creating the impression of flow, as if the body were sinking, or being born upwards from depths. It's a magical image.
Geography Pages [1974], is reminiscent of Frederick Sommer, another master whom Gowin clearly respects and pays homage to. It also suggests the work of Jess [Collins] [1923-2004], the collagist and painter associated with the San Francisco Beat Renaissance, and life-companion to the poet Robert Duncan. The enjambment of intersecting events, in a sort of cornucopia of dream-scapes is another aspect of Gowin's interest--in the manipulation of the image surface. 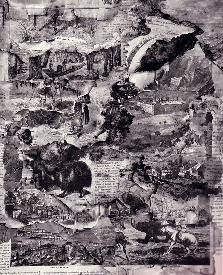 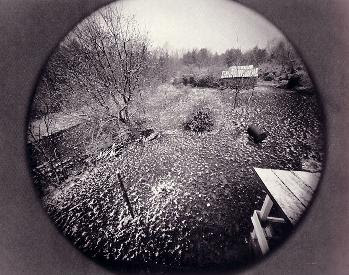 Gowin has undertaken several projects, to explore different approaches to image-making, far afield of his initial concentration upon immediate family and place. One has been a series of aerial photos of industrial development on the land--mining, chemical ponds, contrasting the visual "beauty" of such abstractions, with the ugly effects they produce upon the environment. Some of these images are split-toned, emphasizing their lurid, eerie quality, almost as if they'd been metaphorically "contaminated" by the toning process. This notion of the corruption of nature is placed in direct opposition to his earlier holistic view of rural existence. 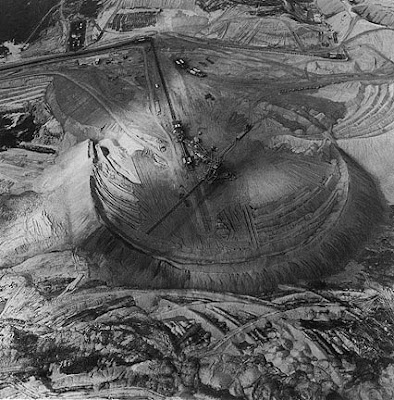 Like Sommer, Gowin revels in the fascination with the unearthly weirdness of these peculiar shapes and densities, but unlike Sommer, he seems more reserved and suspicious of this attraction, as if reluctant to embrace its inherent, metaphysical purity. For Sommer, every surface is a simple fact, an ineluctable filtration or resistance of light, whereas for Gowin, every object comes freighted with its meaning, the moral implication of its function, its purpose. 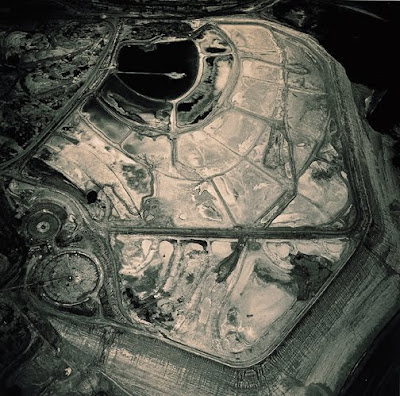 Gowin's "bubble" images--the world in a bubble--or as faux magnifications--or glimpses of a remote world we only fleetingly inhabit, or imagine we had once lived in. Like looking through the wrong end of a telescope, time receding inexorably away from us, as--from the moment of first consciousness, the prolonged elegy that is an individual life--is revealed to us. Looking from the present into the past, through this little distorting peep-hole, we're not there, we're here, looking in--inside out. 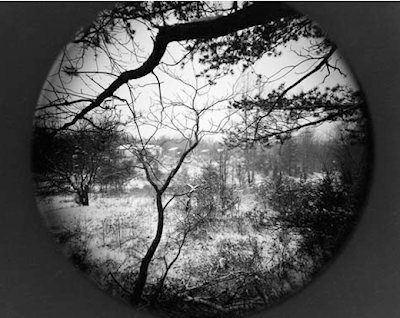 Posted by Curtis Faville at 9:19 AM