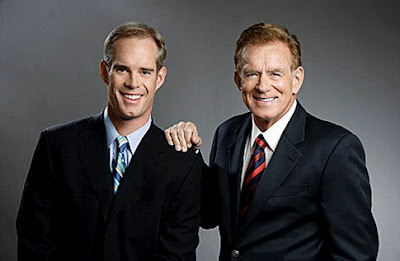 Listening to the World Series the last week or so, I've noticed that the announcers--Joe Buck and Tim McCarver--keep making a simple mistake in grammar.

They keep saying "A-Rod is too good of a player not to start hitting eventually" or similar phrases.

Too nice of.  Too good of.  This isn't English.

It probably comes from combining the phrase "good of you" (perfectly acceptable) with "the best of" (as in "the best of alternatives")--but the resulting "too good of" is bastard phraseology, an improper use of the superlative construction.

Most national media announcers think they speak correct English, but most of them don't. Even the confident, educated types, like Joe Buck or Tim McCarver, don't. Probably the producers never correct them, either because they themselves can't speak correct English, or they're afraid to offend by pointing out errors.
______________
Addendum:  This evening, [Nov 2] in Game V of the Series telecast, Tim McCarver started a sentence this way:  "I don't think it's arguable that...." What he was trying to say was that one could not make an argument against his proposition. But that's not what arguable means. It means capable of being supported by (an) argument. In other words, McCarver said the exact opposite of what he was trying to say, because he didn't know the definition of the word arguable.
You would think that broadcasters would have to pass basic literacy tests before being hired to speak to the unwashed millions of listeners and viewers across the land. These people don't have the grammatical proficiency of high school seniors--at least the high school seniors of my day.
___________
Addendum to previous:  This morning, listening to local radio jock Gary Radnich, I heard the following sentence:  "There are much more people in the audience that we must adhere to." I've felt for a long time that Gary Radnich ought to be unceremoniously laid off by local TV Station 4. Not only does he have nothing to offer about the running and performance of local sports franchises, but the man's unable to make a simple English sentence. He strings together fragments and interjections, cliches and howlers, generally in a tone of voice that suggests drunkenness or mild apoplexy. He's an embarrassment and an irritation. If this is the best talent available to cover sports, I'll eat my hat (and I don't even wear a hat).
Posted by Curtis Faville at 7:12 AM

I love listening to real people speak. People shouldn't speak like robots. They should have all kinds of inconsistencies. They are more enjoyable that way.

Still, I find it fun that you are a grammar Nazi. Sieg heil, baby! to the death camps with everyone who isn't literate!

I don't think it's too much to ask of broadcast announcers that they speak clear, grammatically correct English. We all slip, of course; but there's no reason slips shouldn't be brought to our attention, courteously, preferably by a professional editor.

Grammatical correctness is itself a sort of courtesy, both to the listener (reader) and to the tradition. A grammatical error is a bump, a hiccup, a speck; it causes a momentary distraction, and interferes with clarity and effectiveness.

Don't get me started on another question: voice quality.