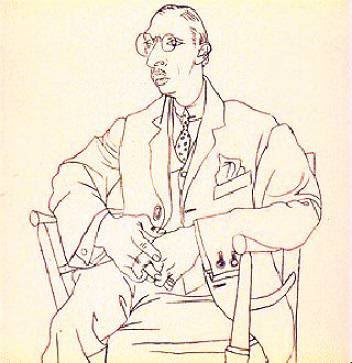 Stravinsky by Picasso
It may be idle to discuss music on a blog, since the whole point is the sound of the music. But certain composers make such a splash in the general cultural milieu, that they transcend the boundaries of sound, because of the power of their statement.

One such composer was Igor Stravinsky [1882-1971]. Stravinsky, a native of Russia, abandoned the study of law to pursue private musical studies with Rimsky-Korsakov (the composer of Scheherazade, among other works, and often cited as the master of orchestration of his era). The great ballet impresario Sergei Diaghilev, attended the premier of one of Stravinsky's early pieces in St. Petersburg, and hired him to compose a full-length ballet for his company, The Firebird [1910].  Firebird is, in most respects, a very efficient and clear expression of late romantic evocation, moody and impressionistic. It remains a concert hall favorite, in its various "suites" incarnations (revised, by the composer, with different instrumentation, over the ensuing decades), 100 years later, because of its delicate and exotic flavor. Influences upon it might include Mahler, Chabrier, Rimsky, and, most obviously, Tchaikovsky. It's very pretty, but didn't really break any of the musical rules or modes of its time. 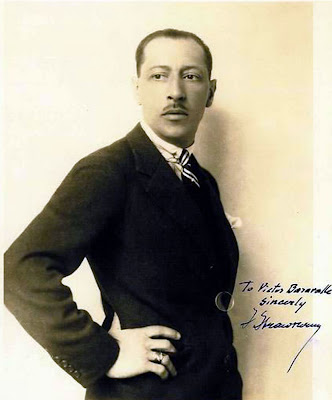 The Young Stravinsky
I'll never forget the first time I heard Petrouchka (the overture suite adaptation). I had bought the record at the local music store (Angel 35153, 33rpm LP), with Igor Markevitch conducting (which also included the suite from Prokofiev's Le Pas D'Acier--wow! what disc!). What a thrill it sent through my bones! I could hardly restrain myself, and played it three times more. I knew, at that moment, I'd heard the announcement of the modern age, like a trumpet blast! Here was the motive force of the Industrial Revolution, the ecstatic socio-political transformation of the 19th Century into the 20th. Nothing, again--musically speaking--would ever be the same for me. Petrouchka will always, for me, be a young man's piece, energetic, uncompromising, irrevocable, dramatic, and filled with optimistic rhythm. It's fearless music, and once you've heard it, nothing else which preceded it in the history of music can ever be the same again. Brahms, Berlioz, Bruckner, Debussy, Saint-Saens, Liszt, Wagner--how dated and timid they all seem beside this new, crisp sound. They are what they are, and wonderfully moving and profound, but superseded.
For those who were present to see the performances of these ballets, the music was only one component. The dancing, the costumes and set design, the whole effect of the spectacle must have been overwhelming. Based programmatically upon Russian folk tales and ideas, they were intended to exploit these elements, against the traditional backdrop of the polite, mincing styles of the late Victorian stage. The Diaghilev ballets were muscular, acrobatic--the venue where the great Russian ballet dancer and choreographer Vaslav Nijinsky achieved his greatest fame. The coming together of these great talents--Stravinsky, Nijinsky, and set-designer Leon Bakst--was indeed a miraculous conjunction. As we move away from performances in time, we lose the sense of what the actual, integrated event meant, especially to those who saw it. Even if such an event can be recorded--in movies--we don't see it through those eyes, and hence the feeling--what it was like to have been there at that moment in history--is lost too. 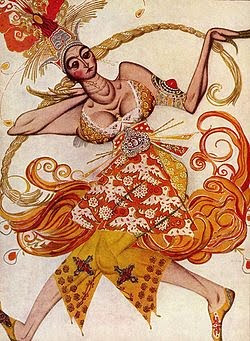 Leon Bakst: Firebird Ballerina, 1910
It's a clear progression--Firebird to Petrouchka to Rite. Impressionistic folk dream to puppet theatre ventriloquism to--primitivistic sex-and-death ritualistic tom-toms! Theodor Adorno has some helpful things, as usual, to say about Stravinsky's Rite of Spring:
"Stravinsky made the sacrifice of a human being--and the leading dancer, no less--the subject of his central work The Rite of Spring...a sacrifice that is not so much dramatically interpreted as ritually accompanied by the music" [Adorno "On Jazz"]. "Stravinsky made dissonance, in contrast to its psychological function in Romanticism, a representation of extreme physical pain (The Rite of Spring), used it to break up the musical 'culture' through a dissociation of harmony in 'wrong notes,' [Adorno, "On New Music"].
It's difficult to imagine why the audience would be so violently engaged by a piece of music. Which may give a hint at how revolutionary this music must have seemed to their ears. With the radical and eccentric developments in post-War music behind us, it may seem quaint and amusing in retrospect. With the annunciation of 19th and early 20th Century scientific investigations into origins--natural selection, psychological dimensions (Freud), primitive myth (Fraser), social theory (Marx), and so on, it may have seemed to early audiences that a kind of crude, hysterical anti-utopian mystery-play was being foisted off as serious dramatic entertainment. Musically, the programmatic components were being exploited to evoke a dark, harrowing, pre-civilized past of tribal ritual and naturalistic, elemental forces. 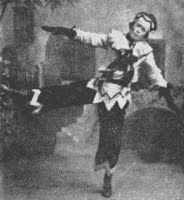 Nijinsky, dancing Petrouchka
In Beethoven, the motive force of emotional power and psychological obsession emerges as an emphatic earnestness through classical formulae: Mozart's rounded delicacy and titillating perfection are raised to a new level of impatient insistence. Romanticism's fullness and richness of texture (Brahms, Liszt, Tchaikovsky, Mahler, Mussorgsky) achieves its apotheosis in Wagner and early Richard Strauss. Violence, hysteria, primitivism are unleashed in The Rite, with what to its first audiences seemed terrifying implication:
"The complex music and violent dance steps depicting fertility rites first drew catcalls and whistles from the crowd. At the start with the opening bassoon solo, the audience began to boo loudly due to the slight discord in the background notes behind the bassoon's opening melody. There were loud arguments in the audience between supporters and opponents of the work. These were soon followed by shouts and fistfights in the aisles. The unrest in the audience eventually degenerated into a riot. The Paris police arrived by intermission, but they restored only limited order. Chaos reigned for the remainder of the performance, and Stravinsky himself was so upset on account of its reception that he fled the theater in mid-scene, reportedly crying. Fellow composer Camille Saint-Saens famously stormed out of the première (though Stravinsky later said "I do not know who invented the story that he was present at, but soon walked out of, the premiere.") allegedly infuriated over the misuse of the bassoon in the ballet's opening bars. Stravinsky ran backstage, where Diaghilev was turning the lights on and off in an attempt to try to calm the audience. Nijinsky stood on a chair, leaned out (far enough that Stravinsky had to grab his coat-tail), and shouted counts to the dancers, who were unable to hear the orchestra." 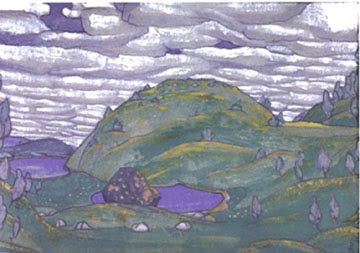 Set Design from The Rite of  Spring
The disintegration of 19th Century musical ideas and assumptions finds one of its key expressions in Stravinsky's Rite. Stravinsky would go on to become the champion of a Neo-Classical Style, meanwhile incorporating aspects of jazz, degrees of dissonant and atonality, poly-tonality, folk and pop flavors, into his musical language. Rite of Spring may be seen as the central work not only of his career, but of the dawn of Modern 20th Century classical music.
In my mind Le Sacre is associated with the work of Bartok, in particular, and of Janacek, and Prokofiev and Shostakovich. The daring and panache of decisive statement--or of irony, or ecstatic possession, or peasant simplicity, or complex mental ratiocination--unrestrained by niceties of the salon, the parlor or the boudoir. Stravinsky's three great ballets--created in just three years--record the rapid transformation of the classical approach to composition from the 19th to the 20th Centuries. Stravinsky's feat has never been repeated.
Posted by Curtis Faville at 10:38 AM

In my mind Le Sacre is associated with the work of Bartok, in particular, and of Janacek, and Prokofiev and Shostakovich. The daring and panache of decisive statement--or of irony, or ecstatic possession, or peasant simplicity, or complex mental ratiocination--unrestrained by niceties of the salon, the parlor or the boudoir.

I think Stravinsky has more of a french influence than many realize. He praised Ravel, even Debussy--. Late Debussy's music quite dissonant and forbidding (and not always successful, like Strav's itself). Stravinsky's La Sacre has moments of intense dark beauty, but sounds disorganized, capricious at times to me (though Petroushka quite ...normal). After the first few movements (including the great sacrifice scene) many sane people lose interest...Alas, I feel the same about most of Bartok's music. Experimentalism for the sake of experimentalism. Some of us eschew the pseudos--I'll listen to Schubert's last dark chamber music, or Beethoven's Pathetique instead...

There are russian influences to Strav's music, but his music is quite different than Prokoviev's lyrical, and dare we say late-romantic sound (while a bit....too lyrical, Prokofiev arguably a superior composer to Stravinsky, also influenced by the frenchies and by Scriabin, really the unknown mysterioso behind 20th century musick) .


(Kirby Olson on Kant, philosophy, logic is possibly even more laughable than his attempts at lita-ra-ture. Priest's mostly just giving the old skeptical points (old, like Heraclitus old) contra law of non-contradiction and law of excluded middle. We might not step in the same river twice [parsing that argument takes more time than some realize], but we are not likely to change the pythagorean theorem, are we, or the square root of 81, etc ).

Aesthete I am not, but didn't Maestro Picasso produce that drawing of Igor S? Cocteau's like a ballet-film dude

Thank-you, it *was* Picasso!