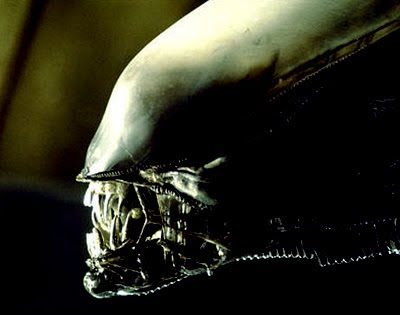 Ridley Scott's masterful sci-fi horror flick [Alien, 1979] succeeds quite nicely as a shock & awe narrative, but it's so much more: An absorbing, symbolic-visual exploration of the birth/death parasitic/symbiotic metaphors that leaves one breathless with alternatives. Camille Paglia once described sexual reproduction in the natural world in terms of plagues and hoards and swarms--which is not how we often think of it in a human context. But aggressive self-preservation and mindless consumption are everywhere we look in the natural kingdom, and there's nothing quite so terrifying as looking with unsentimental eyes at how sex and dominance and the hierarchies of selection are expressed at their most basic, concrete levels. 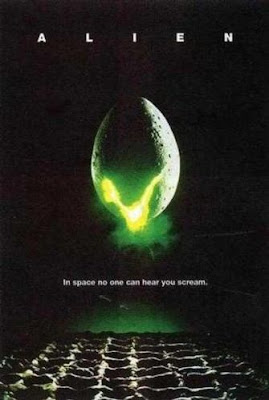 The design of the alien creature itself is a fascinating variation on the robot concept. The head of the alien suggests a phallus, but its vicious teeth--and, most interestingly, its compound mouth inside, like a tongue mutated into an "internal" set of jaws--suggest all kinds of metaphors, such as the phallus as sword, phallus as devourer, or collaterally, a vagina-dentata, or a phallus which devours (as in the female spider which eats its mate, or male fathers which kill or eat their young). In the movie, the alien is portrayed as a killing machine, without remorse, without ulterior motive, a kind of clone upon the human (or any available) form, adapting to its hosts in order to mutate over and over into successively more sophisticated forms of animate exploitation.
The "company's" desire seems the most dominant motive trope in the story. Its human "workers" (as in an ant or termite or bee colony) seem only to exist for the good of the organization, a variation on the corporate paradigm of late 20th Century capitalism. The alien thus becomes a potential managerial super-race (or super class) of hybrid, mechanical managers whose only ultimate function is the perfection of the expanding power of the organization.
Posted by Curtis Faville at 6:40 PM