My Dinner With Andre - The Apotheosis of Media Identity 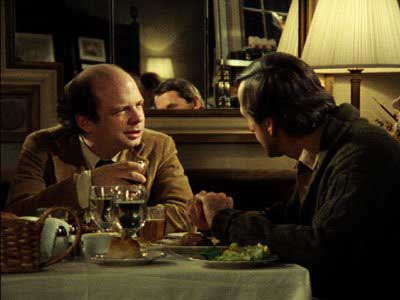 My Dinner With Andre [Saga Productions, 1981], directed by Louis Malle, broke important new ground in the use of cinema. Superficially, it's a tiny theatre piece--nothing more than two middle-aged New York theatre people having dinner after a period of separation. The dialectic, constructed out of what we eventually realize is a version of the real thing--Andre Gregory and Wally Shawn are acting as themselves, and much of their conversation is basically non-fictional (real life)--succeeds in transcending the flatness of constructed dramatic dialogue to achieve a sort of trompe l'oeil, a staged slice-of-life intended partially to obliterate the screen or membrane between the "action" and the audience's suspension of disbelief.
This technique echoes attempts by certain writers (Capote, or Mailer, for instance) to make "non-fiction novels" out of actual stories, using the same tools as journalism (interviews, research, reconstruction of scene), but shaped into a coherent narrative, like a documentary of unfolding events. Aside from the ordinary props of a very limited interior (a quiet New York restaurant), the only directorial  innovation would seem to be the movement of the camera around the table, as if by circling the two voices in time, a de-facto fourth dimension could be implied. The camera's intimacy allows us into the conversation in a way that a stage-production couldn't have done, as well as allowing us to turn the scene around, to view it from multiple perspectives. There is thus a sequence of contextual frames:
audience - movie - scene - actors - real people - dialogue - real events - documentary - audience
In other words, the exploitation of a "real event" titillates us with the prospect of naturalistic detail, even as we know (in the traditional sense) that what we're seeing is staged. Could it be, we imagine, that the actors are literally making it up as they go along, as some method actors (like Brando in Last Tango in Paris) were said occasionally to have done? And even if they are, how different would it be from what we're seeing in the film itself?
The film asks the question: What are the limits of value on experience, in a dramatic action? Does this action fit into any traditional subdivision of drama? Tragedy? Comedy? History? Soap opera? Intellectual dialogue? Do the events and struggles in the lives of two "ordinary" people succeed sufficiently in raising our awareness or appreciation of the human condition to justify the effort?
I had an old friend from my work in the city, of many years, who joked that the film reminded him of our many break and lunch conversations, and I suppose that's true. There's a certain applicability in the situation of two intelligent people discussing the problems of the world over coffee, albeit perhaps without Andre Gregory's sometimes distressingly camp itinerary of New Age whistle-stops.
If the movie has an argument, it's over choice of life-styles. In terms of the bourgeois preoccupation with formulaic enlightenment(s), Gregory's obsession to discover the hidden truths in remote aspects, Wally's quotidian hard-luck out-of-work-actor-in-a-stable-relationship foil is neatly opposed. What the two share--and which sympathetic audiences probably also share, with them--is their intellectual curiosity and interest in other modes of life, other alternatives. Gregory's the adventurer, the explorer, whilst Wally is the dreamer, the plodder. Andre needs the stimulation of being at loose ends, on the artificial edge of personal crisis, while Wally needs the security of knowing where he'll sleep, who's waiting for him, and what the next day may hold for him--he acknowledges his stodginess, but ruefully accepts it as inevitable. At least in this sense, the action has some universal applicability, at least in the modern age: For those in the modern world, the decision to stay put or strike out on untrodden paths is a pertinent one.
My Dinner With Andre balances delicately on this division, between our boredom and our fascination with the possibility of ordinary life served up as interesting fare. As the apotheosis--one kind of fulfillment of the whole interview/analysis genre invented and developed in the 20th Century--of our media-crazed, hypochondriacal culture in which fame and obscurity, excitement and boredom, hope and despair are juggled endlessly in the cauldron of capital--My Dinner With Andre offers the possibility of true introspection. But is it the tawdry vicarious curiosity of The National Inquirer, or the quest for catharsis and self-knowledge we associate with high drama?
Posted by Curtis Faville at 7:34 AM

The first time I watched MDWA, I was entranced, usually--though it wasn't exactly riveting.

The second time through, I sensed it was a farce--a sort of quasi-mystical acting exercise (at least on the part of Andre), not nearly as profound as most of the hipsters of the time thought it was. And sort of depressing, ultimately. Most of us will never experience the life that Andre Gregory experienced (or that of most ho-wood celebs), or somethin' like that.


Good work, Sir Faville, with posting some dissent on Sarge Kirby's blog. His latest bout of paranoid flag-waving shows that he's not merely "conservative" but an obsessed, monomaniacal hysteria-case (and his writing pretty much a juvenile joke as well). He could at least attempt the proper tone, ala George Will or Rush Limbaugh, or Foxnews oratory. Kirby's not even an O'Reilly sort of pontificator; he sounds like some high school senior, young GOPer type at a hick school offering up his "support the troops" speech. Gee whiz wally, let's liquidate these sand n---ers...

Olson misreads Locke as well, if he reads him at all. Locke's not that conservative (though he was a hypocrite at times). He did not approve of the Torys or aristocrats of his era. He also had words for the judiciary, and let's not forget his comments on natural rights--Locke's not a machiavellian (though KO suggested as much, via the old rightist slogan, the ends justifies the means).

Locke denies the divine right of Kings, and insisted faith be tried at the court of reason. There are, to be sure, somewhat conservative Lockeans, but there were somewhat leftist Lockeans as well (including Rousseau, and Jefferson, for all his faults).

Thanks for the post, J, but you should probably not use another blog comment box to fence with Kirby. I don't know what to suggest, short of creating your own web-blog and addressing him there.

Where should one fence with him? I have posted comments about his patriotic claptrap on a few sites (including Silliman's). He's become like a Falwell sort of blowhard.

He now screens comments, so futile to post there. He should be routinely denounced and mocked--I have alluded to him on my blog, but I'm not really "inside" the Lit-biz (certainly not poesy sort), so it's better comments appear on lit-blogs (I believe Berube has said some things about Olson...)