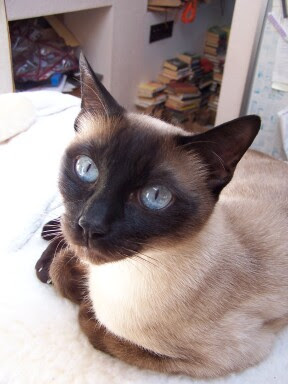 Since our only child, Randall Matthew Faville, died in an autombile accident at the age of 26, we've increasingly depended upon our Siamese cats for companionship in the household. Pets aren't a replacement for people, but they do have quite individual personalities, and they are very domestic creatures, clean, usually fastidious, and often affectionate.
Lottie was the youngest of our three Siamese cats. We bought her in 2001 from a professional breeder in a small town just east of San Diego, with the thought that we could breed her with our male Mocha. But it soon became apparent that Mocha had problems in the equipment department, and after an operation, he no longer could qualify. We considered spaying Lottie at that point, but decided against it, not realizing the potential health issues that might cause down the line.
In February 2009, Lottie was diagnosed with breast cancer, which appeared as three small nodes along her upper left rib-cage. I looked up the diagnostics on Google and discovered that her prognosis was poor, at best. Following a second operation in late October to remove large masses from her chest and left underarm, which we did basically to disencumber her for greater freedom of movement, we knew the end was not far off. A second opinion by a spiffy high-tech clinic in Rohnert Park, Sonoma County earlier in the year confirmed that she wouldn't live much longer.
Our other two previous older Siamese (and Burmese) cats had both died at home, and we thought it better to let her do this, too, rather than engage in further invasive treatments with the accompanying discomfort and fear. The cancer in due course moved into her lungs, making breathing increasingly difficult, until the crisis arrived last night and this morning, when she died in her little round cushion-bed, as we sat and watched.
Lottie was a special little lady. Rather than get into her sand-box, she would perch on the edge and do her business. She always insisted on being at the highest place in any room, and would only eat on counters or tables, where she could keep track of everything around her. In her hormonal heat, she loved being rubbed on her back and head, and would roll over delightedly with her paws in the begging position and purr. She would climb up on my chest in bed, and tap me lightly on the chin, demanding love, or would jab her nose up under my arm, trying to snuggle in. She would make a characteristic "chirp" sound when she wanted your attention, but her range of conversational tones and sounds was broad, and you never were quite sure what each new utterance was intended to mean. Of the ten cats I've owned in my life, she was the sweetest, and gentlest of all.
It broke my heart to see her go. If I'd thought we could have done anything to extend her life, I'd surely have chosen to. Like all animals, she suffered silently, and resolutely, not believing, until the last seconds of her breath, how close death was.
Rest in peace, Lottie. If there is a heaven for kitties, you're certainly there now. Bless you, sweetheart, and good-bye.
Posted by Curtis Faville at 12:35 PM

I was visiting a friend with a terminally ill cat. He was planning to put her to sleep soon. I’m not a cat person but this cat was really friendly with me, a total stranger, when I was sitting on the couch. He came up to me and pawed at me, saying hello, and then she snuggled in my lap. I have never seen such an affectionate cat. Now I think it might have had something to do with her imminent death. She was so gentle with me.

It's an interesting question. Do animals "understand" death? I tend to doubt it.

As her lung cancer progressed, and her efforts at breathing increased, Lottie seemed to become more worried. But I didn't sense that she truly felt fear until the final seconds of her life. She literally struggled off a pile of towels onto the floor, almost falling sideways, and I picked her up and put her in her little bed. She made two desperate cries--"from the heart"--and stopped breathing. Probably less than 20 minutes before she died, I rubbed the muscles along her spine, and she purred slightly. These to me are just miraculous events.

My mom claims her cat of ten years let out the weirdest yeowl as it died that she had ever heard. But it can't be that the cat thought, oh, no, I'm going just like Uncle Harry! It's just experiencing something weird, rather than reflecting upon it in a historical relationship to other events of cats' demise?

I am sorry to hear about your cat passing away. I admire and agree with your decision to let her die at home and not let her suffer the indignity of treatment, which I think ruins these noble animals.

That she even let you near her as she died (or the other cats that you mention) amazes me. Most cats (that I have known) hide when hurt or are near death.


My brother and I have threatened to write a book called "Everything I Ever Needed To Know I Learned From Cats." Dying a dignified death at home with my family can be added to the list of lessons.

Lottie, say hi to Malcolm X, the biggest badass sixtoe you'll meet up there. He's a good judge of character, and I always agreed with his sense of people.