The Ghost Gives Up the Ghost 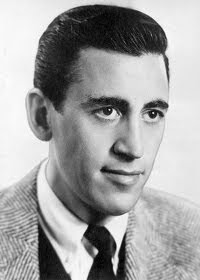 For those born in my generation--the post-War, Baby Boom Generation--there was no more important writer than J.D. Salinger, no more important book than the novel The Catcher In the Rye [LIttle Brown, 1951]. We weren't the first generation to have read the book with wonder and delight, and we wouldn't be the last. If memory serves, I was given a copy as a birthday present when I was in the ninth grade. The book, at least in those days, was considered a trifle risky for teenagers, since it contained a fair amount of scatology, and a scene involving a prostitute (woo, sex!). Nevertheless, it became a part of the mythology of my adolescence, as it did for millions of other kids, then and since, and the author, and his work, were of immeasurable importance to my sense of literary taste, for a long time. Like many of his fans, I "wished the author [had been] a terrific friend of [mine] and [I] could call him up on the phone whenever [I] felt like it." What was it about the novel that made us all identify with him (the Author), what generated such implied intimacy?
Indeed, it seems to have been just such intense curiosity and invasive pressure that drove Salinger into a sort of psychological "bunker" for most of the rest of his life, ultimately insulating himself inside a suburban Connecticut residence, rarely venturing out, granting no interviews or contact with his readers or critics or celebrity hounds; and refusing to publish anything for the last 47 years of his life. Revelatory memoirs by his daughter and a girlfriend did nothing to assuage public interest in the most potent issue surrounding his life: Had he indeed continued to write more fiction, and would there ever be any additions to the modest canon of works whose popularity and sales continued to be as strong as they had 60 years earlier? Did Salinger leave works, and instructions to his heirs or administrator, about how they might be published?
Salinger came to maturity as a writer in the 1940's and '50's. Even at its best, his work is very much bound up with the social and literary milieu and issues of that period. Not to speak of its style--mostly in evidence in the short stories--which looks quite dated from this perspective. This fact, combined with his determined seclusion--from the world which might have continued to inspire more fictions--would suggest to me that the deterioration of his subject-matter--the descent into the mythical Glass family, which must in some degree be understood in terms of Salinger's own biography--leads only to dead ends. If indeed he continued to write, what might his attention focus on? Having receded into a small town monastic life-style, what might he have been expected to produce, unless, like Thomas Merton, he speculated about religious isolation, or, like Cozzens, continued to imagine a world that had evaporated decades before?
The bargain Salinger had made with himself required that the value he placed on the purity of his own soul, his own precious inspiration, would demand a repudiation of the vitality and complication of human intercourse. If fame and prosperity and the public's vicarious fickle sentiments were loathsome, Salinger refused to fashion a persona that could deal with these unwanted influences, refused, that is, to compartmentalize himself in such a way as to preserve that part of himself (his talent) while fending off the worst aspects of a media-obsessed world.
In the end, of course, Salinger wasn't the sort of fellow most of his fans would have wanted to know, or know much more about. A man with follies and failures and sacred private obsessions, worried about his health, and the condition of his soul. A man who eventually had let his anti-social tendencies dominate him to a degree that he had lost his grip on reality, relentlessly chasing down publishing pirates and literary carpet-baggers, protecting his precious little franchise of copyrights against all enemies.
It was a sad ending to a career that had begun so marvelously, with a unique miraculous 1st person narrative, and a handful of revolutionary stories. The public will always have the works, but the man, who tried desperately to disappear into his own myth, has himself passed into history.
Posted by Curtis Faville at 8:47 AM

The "Salinger heads to Hell" posse seems to be edging out the " Salinger Heads to Hebbin'" gang. The mighty LA Times spent like three pages pretty much condemning him, ad nauseum.

I tend to agree with they naysayers, tho' not sure if JDS has met Charon or not. Catcher ITR I read years ago, and don't recall much except the supposedly nasty bit wit' the whore, which was hardly nasty enough, and I read a few of his stories.

His dialog didn't really work for me. Or rather, he's so bitter and cynical--and misogynistic, I believe--that the dialog sounds nearly ...theatrical, some bad Woody Allen flick or something. Actually a few scenes were sort of interesting, but essentially variations on cherchez la femme. Not a bad variation, but you can only take like Rosie O'Donnell- like hags and hos whining for a few hours...or somethin' like that. I should re-read C.I.T.R, perhaps.

When Pynchon kicks it I wonder if there will be a similar ...freakfest: the dead recluse meme..juicy secrets ready to be exposed.....and a fresh-corpse for the publishing vultures...

I seem to recall that a dozen years ago
or so
he broke his silence and either gave an interview
or
made some public comment..

now it is banned from schools... not even sure it is in the school libraries

I guess it went the way of Huck Finn and Our Lady of the Flowers...
can't fine the Tropic of books ... anywhere..
and, I do believe that Lord of the Flies has also been "yanked"..

now that "we" are so politically correct about our
"just what is" heritage do let's make all the kiddies stupid/naive too.