Over the last few weeks, I've been intermittently reading a book called Story of a Secret State [Boston: Houghton Mifflin, 1944] , by Jan Karski, which I've just finished. Karski * was a Polish diplomat at the beginning of the war with Germany on September 1st, 1939, who ended up working for the duration of the conflict with the Polish Underground Resistance, which period this book describes in some detail. Karski's harrowing tale, filled with narrow escapes, imprisonment and torture by the Gestapo, and fascinating glimpses into wartime Poland, concludes with an account of his attempts, upon reaching the West, to make known the facts of the German concentration and death camps, and the ongoing Holocaust. 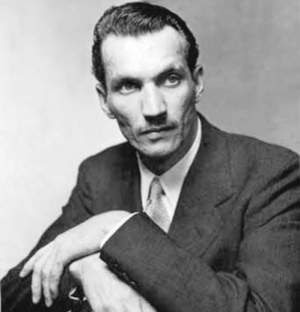 Last year, I read Nicolson Baker's book Human Smoke ** [New York: Simon & Schuster, 2008], which is devoted to some degree in providing a sort of documentary history of the progress of the Holocaust, and the reaction and attitude towards it by the leaders of the "West." I was probably not surprised to learn how callous Churchill and Roosevelt and other figures were towards the early rumors, and later confirmations, of hardships and atrocities suffered by the Jews, ethnic minorities, and the disabled, but I was astonished at the failure of historians to tell this story before now.

Karski managed to escape to the West in 1943, by way of Berlin, Paris, Southern France, Barcelona, Algeciras, Gibralter, thence first to London, and eventually Washington DC. The story he would tell constituted one of the first unimpeachable confirmations of the continuing "Final Solution" of the Nazis--the Holocaust. And yet, few in the West were willing either to publicly acknowledge the atrocities, or to take any action to alleviate the fate of European Jews and "Undesirables"--a fact that continues to weigh on the conscience of the world, now, 70 years later.
Initially captured by the Russians--who, if your history is a little fuzzy here--invaded Poland from the East as the Germans invaded from the West--Karski managed to escape and join the Polish Underground, a vast shadow network of administration, government-in-hiding and -in-exile. Eventually captured by the Gestapo, he endured unspeakable torture, which led him to attempt suicide by slitting his wrists--leading to another supreme irony, as the hospitalization for this self-inflicted injury eventually facilitated his escape, and the resumption of his primary function as courier for the Underground.
Despite severe poor health, malnourishment, and the oppressive facts of Poland's defeat, demoralization and economic exploitation by their occupiers, Karski survived trial after trial, escape after narrow escape, to survive and bear witness to the events of Nazi tyranny. Before departing for the West, he was taken secretly to visit the Warsaw Ghetto, and also one of the staging transfer camps set up to relocate the Jewish population on its way to the death camps. Karski did not witness the actual death camps, believing that the prisoners were allowed to "die" on trains, before being buried in unmarked graves in the countryside. Had he understood how organized and ruthless the extermination process had become, how much more convincing or compelling would his accounts have been, when he was finally allowed, in company with the Polish Ambassador to Washington, to meet with Roosevelt, and describe the things he had seen?
After the War, unable to return to his native Poland, Karski took a Ph.D. at Georgetown University, and spent the rest of his 40 year work life as a professor in East European International Affairs. Polish freedom fighters had originally believed that after the War, Poland could be reconstituted as a democracy, but the Soviet occupation during the decades of the Cold War dashed those hopes. Karski became an American citizen in 1954, and for a time his efforts on behalf of Polish (and European) Jewry were forgotten. After the fall of communism in Poland in 1989, Karski's wartime role was officially acknowledged there for the first time, and he was honored (decorated) there, as well as being made an honorary citizen of the State of Israel, a tree being planted bearing his name at the Yad Vashem's Valley of the Righteous Among the Nations.
Karski's witness stands as a repudiation of the Western powers during the War years: "It was easy for the Nazis to kill Jews...the allies considered it impossible and too costly to rescue [them]...The Jews were abandoned by all governments, church hierarchies and societies, but thousands of Jews survived because of...individuals in Poland, France, Belgium, Denmark, Holland who helped to save [them]...Now, every government and church says 'We tried to help the Jews,' because they are ashamed, they want to keep their reputations...They didn't help, [and those] six million Jews perished...but those in government, in the churches, they survived...No one did enough." [his words]
A statue of Karski commemorates his deeds and teaching career on the Georgetown Campus.
*Wikipedia Entry on Karski.
**New York Times Review of Baker's Human Smoke.
Posted by Curtis Faville at 2:41 PM

The Soviets have been at least as hard on Jews.

And of course much harder on Christians.

In the Darfur the story is the same, but this time with Christians.

And all over Southeast Asia the story is the same.

Forget it if you're a Christian.

It's against the law, and the penalty is death.

That's a story that still can't be told.

It hasn't been told by anyone in Hollywood.

It's amazing how people put their hands over their ears, and won't listen.

I've never heard of this book before.

Sounds like a good book. I wish you had quoted from a just a bit to get a sense of his prose style.

One party states are very hard on anyone who refuses to knuckle under to their blandishments.

This is why we must hold out against socialism in any form.

Once the government has its huge apparatus in place, then all it takes is a single dictator, and the human smoke begins anew.

Fight for pluralism of every stripe around the world!

One thing I forgot to mention was that there's no translator listed in the book. I have to assume that Karski wasn't fluent enough in English to have carried off a 400 odd page book without help, but I might conceivably be wrong. Still....

Yeah, Karski was a Catholic, he makes explicit reference to a special service given him before he left for the West. Nothing is made of any distinction between Christians and Jews in the book. I think Hitler's grudge against the Jews was racial, rather than religious, Kirby, so I'd have to say you're a little off point here.

you might be interested in Martin Gilbert's "The Righteous: The Unsung Heroes of the Holocaust" in which, among other interesting facts, he chronicles the relatively little a certain young Polish curate in Krakow named Karol Wojtyla did to help Poles escape Nazi deportations.

I read somewhere in my research on Karski, his mentioning that Roosevelt, seemingly bored by the facts of the Polish Holocaust report, inquires of Karski "What happened to those lovely Polish horses after the Germans took over?"

same guy. His book "The Second World War" outstanding, and he's written extensively on history of Jews in Europe and Jewish persecution. What a prolific chronicler and, personally, what a sweet, unassuming and always helpful individual. He was a visiting "research scholar" at a university only hours away from me.

Your article's reignited my old interests in history. Thanks, Curtis.

FDR apparently didn't have much heart. What heart he had was supplied by Eleanor.

I hope that sometime you can visit FDR's big estate over by the Hudson about an hour from here. One of the highlights is his automobile. In spite of the polio he would drive it at amazing speeds. It had a couple of sticks, one for the brakes and one for the accelerator, and he'd use his two functioning hands to provide terror rides.

So I'm not surprised he asked about the horses.

It was Eleanor who was interested in universal human rights, and later did preside over the UN's universal declaration of human rights.

This is a very weird document. It does allow the UN to stop genocides, but not of those within a country. So the Sudan can destroy its own internal population of Darfur Christians.

But if they were doing that within another country, the UN mandate would be to make them stop, from what I can gather.

And there are also five countries that have veto power. If any one of them says we can't go into a country, then we can't. China for instance won't let us go after Zimbabwe or the Sudan because they own the mineral rights in those countries and they don't want anybody else in those places.

The thing about socialism is that it makes the government into a giant selfish ego, that pursues its ends without any opposition.

Hitler inherited that from Bismark, and went to town with it, seizing the wealth of one group after another.

The Bolsheviks did the same thing in Russia.

Socialism ends up as a kind of Cyclopsean kleptocracy in every case in which it eclipses pluralistic govnerments.

Hitler's hatred of Jews was based on the fact that he wanted their wealth. He stole it, and incinerated them, first carefully prying out their golden teeth.

The same thing is being done to Christians in places like Myanmar, Vietnam (after we left they crucified the Catholics with especial vigor because they were allied with the French -- they separated them into special villages and went in and made them eat Agent Orange in front of their children).

But I can guarantee Hollywood will never make a film on that topic, or on the Christian Karen people of Myanmar.

It will be great to watch Six Nations: France, i have bought tickets from
http://ticketfront.com/event/Six_Nations_France-tickets looking forward to it.