Stein and A Very Nice Day

Gertrude Stein's work resists closure, resists easy analysis, resists quotation, resists description. It's slippery, and elusive. Often it seems too simple and deliberately naive. You think you have it figured out, and then you read another passage in which she throws all her (and your) assumptions about how a work proceeds out the window, and there's something ingenious and unique about it. 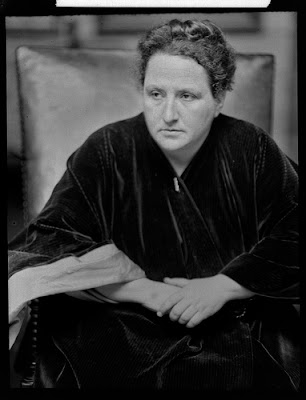 After I took my MFA at the University of Iowa in 1972, I thought I would go on and take a Ph.D. at Berkeley. I had planned to do a thesis on Stein's work, which I thought had been neglected by the academy, and there seemed to be few people interested enough in it really to study it carefully enough to dissect and summarize its structure and signficance. Professor Richard Bridgman, at Berkeley at that time, had written a serious study, Gertrude Stein in Pieces, but when I talked with him about it, he seemed highly skeptical about the benefits of reading or studying her work; his interest in her seemed purely content-driven, as if the only point in reading an author was to discover what their private psychological obsessions might be, and how that was expressed in the work. He seemed totally uninterested in the technicalities of her writing. "She was obsessed with spiders," he told me, "among other irrational preoccupations. I can't say I'd recommend her as a subject for extended study."
I ended up not resuming my academic career at that time, which was probably just as well. I don't know how it would have (re-)shaped my thinking about literature and art. The whole graduate student scene was too familiar to me, from my years of work at Iowa, and it seemed an uninspiring endeavor at that point (I was 26 at the time). The competition, the stress, the mountains of drudgery (reading). The constant arguing with professors. 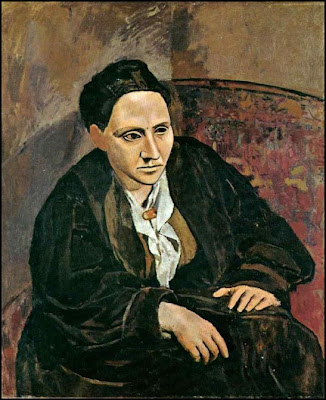 Reading Silliman's blog yesterday morning, in which he quotes a Stein sequence from A Long Gay Book, brought back memories of that time, when I was reading a lot of her work. Here's a selection from a series of imitations I wrote--along the lines of Jerry Rothenberg's A Stein Book [1966]--
There are nations, there are borders there are colors and colors are hot.
.
A rhythm, a ghost in a chance and a plaintive clopping, a snowy evening and a glass of punch, a glass of punch is a fine refresher.
.
Round ones, nice round ones dictate calm, a taste in surprises. A white surprise, a pink surprise and a color in appearing. Open and choose a custard.
.
It is essential to be a worrier, to be a worrier in need. It is essential to be a wearer of different tweed. In summer or in winter, there is need, but do not be a worrier, a worrier in winter.
.
They have cars. They have cars and by the coast they have whistles. They know buckets and sand, they have paintings and frames and uncles. My dear rag.
...
Blotchy mountain.
We're up on
blotchy mountain.
.
How they lie in laps.
Provence.
Like they say.
These big wooden women.
.
Like a white wall.
In Portugal.
A black
and white wall in Portugal.
The relationship between Gertrude Stein and Ernest Hemingway is one of the most interesting in literary history. Superficially, they had little in common, but at a certain point in their lives, they became mutually fascinated and affectionate towards one another. Hemingway picked up a couple of key features of prose narrative style from her--the so-called "cubistic" strain in his writing, supposed to be derived from Juan Gris and some of Stein's short prose pieces in Geography and Plays. Their friendship was probably doomed not to last, since their life-styles were so divergent. In many of Hemingway's early stories, you can see him building up impressions and descriptions in a way that he had learned from her, often jamming many declarative phrases together in a rhythmic, propulsive recital, but measured out in rounded bars of the utmost finality and discreteness. No one had ever written prose the way Stein had discovered, and Hemingway stole that trick from her.
Posted by Curtis Faville at 11:31 AM

Stein had a hand in inventing minimal, imagistic writing, eh?

More reasons to dislike her. Papa Hem. did better with like Steven Crane as a model (quite capable with ..images as well), though not of the parisian salon sort. Pound too probably cribbed quite a bit from Stein's salon.

Sort of jesting, but I find her little color splotches dull for the most part.

Mr Wiki's page on Gertrude has an interesting bon mot: Stein and Alice B Toeclips, both jewish, were apparently close to some vichy boys, and seem to have been exempted from the nazi round-up, and felt no need to run. Even after the war, and after Le Mort du Stein, Alice contributed some shekels to attempt to free a few of her former vichy pals...

Richard Bridgman was one of the least attractive persons I ever interviewed. He seemed not the slightest bit interested in Stein's work or context. He read through the entire oeuvre, and wrote his detailed and not terribly enlightening book, apparently out of a sense of duty. I detected no sense of humor in the man at all.

I just read D.H. Lawrence's Twilight in Italy and was surprised at the many passages that seemed greatly influenced by a reading of Stein -- amazing, since he wrote that book before Geography and Plays had appeared. Something in the air, perhaps: but you'd swear he'd read Three Lives, if nothing else.