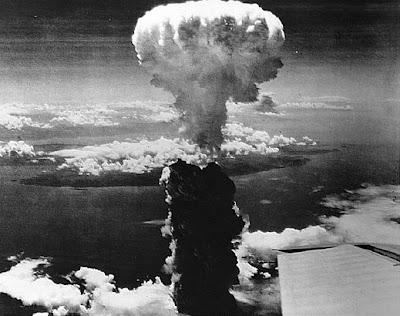 Hegel says somewhere that language however eloquent or poetic cannot describe our perceptions in full, or something like that (other great minds have said the same).

Which is to say, the pic of the Nagasaki 'shroom cloud tells at least 10,000 words --thank osiris that the USAF deathbird missed the target--overshot by 2-3 miles. The naga. plutonium bomb quite more horrific than hiroshima U, and created a massive firestorm, killing everyone (and anything) within like 2-3 mile epicenter: had it hit the city center as planned, probably 2 million would have been vaporized. I don't think even the heppest of beatcats quite captured it in a chapbook memory......photography does to an extent