The editing of the collected works of a prolific author--especially a poet--is a complex undertaking, involving as it does the sifting, sorting and organization of a large body of work. Authors may or may not leave their work to posterity in a state which makes the task of editing it convenient. Some think hard and carefully about their legacy, and do their best to pass it on in a finished state, in effect "self-editing" themselves, in such a way as to control how they wish it to be perceived and understood. Others are less concerned with such conclusiveness. In the case of Larry Eigner, we had an instance of an author who, because of physical disability, was prevented from making "perfected" texts, due to an inability to write neatly, or to manipulate the manual typewriter with sufficient ease. Despite this limitation, Eigner had clear ideas about how his poems were meant to be "set" typographically. It certainly is not clear that he ever envisioned a presentation of his holographic typewriter pages as final, finished works, like paintings or drawings. 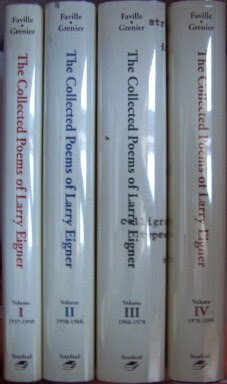 Luckily, however, Eigner was assisted to preserve his work through a process of progressive storage, in an arrangement with the University of Kansas Kenneth Spencer Research Library, begun decades ago, whereby periodic regular deposits of his emerging work were sent for inclusion in a growing archive, surprisingly accurate and complete given Eigner's own tricky system of classification and dating of his individual poems. After Eigner's death in 1996, his brother Richard presented the contents of Larry's files and correspondence to Stanford University Green Library. The Larry Eigner Papers archive comprises 19 boxes, and contains a wealth of biographical, historical, literary and textual information. 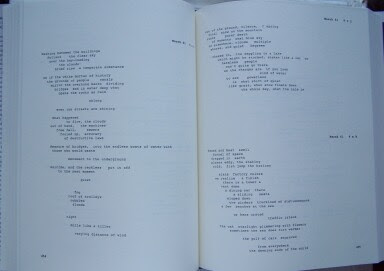 Back in 1974, I was a struggling writer, recently graduated from the University of Iowa Writers' Workshop, attempting to make some kind of living, while pursuing a career in writing. I had begun a small literary magazine called simply L, in which I published the work of poets whom I liked or emulated. I was also interested in publishing books, but lacked the funds required to pay the printing and binding costs. I applied for and received grants from the Coordinating Council of Literary Magazines, as well as from the Small Publisher's Grants Program of the National Endowment for the Arts, to support the magazine, and to publish books by poets. In my first application for a publisher's grant from NEA, I listed, among others, a proposal for the publication of Larry Eigner's Collected Poems. Eigner still lived, at the time, in his parents' house in Swampscott, Massachusetts. My proposals were extravagant, given the obstacles to realization, but in those days I dreamed big dreams.
I remember distinctly, at the time, mentioning this proposal to Barry Watten, who lived in similar circumstances, in San Francisco. He was more familiar with the exigencies of Eigner's situation, having published his work in this magazine, which he co-edited at that time, with Robert Grenier, a poet and teacher under whom we had both studied while at UC Berkeley in the late 1960's. "You have no idea what that would involve," he said, "the state of the manuscripts, the amount of material, you're not set up to accomplish anything like that."
How right he was! As it turned out, NEA didn't grant me the huge sum I had requested, so my plans ended up being curtailed. But I did end up publishing a short pamphlet of Larry's poems, My God/The Proverbial, an experience which taught me a good deal about the state of his work desk, and how he went about filing and arranging for publication(s). Based on what I had known about the state of his work, circa 1975, I believed that a collected poems, representing all the published work up to that date, might occupy a volume of perhaps 400 pages. As it turns out, Larry had already, by that time, produced enough work easily to fill about 1000 pages, depending upon how the work was laid out. Oyez Press [Robert Hawley] had published the Selected Poems, Edited by Samuel Charters, in 1972, a modest collection of 125 pages, which included some prose writing in addition to the poetry.
Nevertheless, the dream of a collected poems by Eigner remained in the back of my mind, but as the years passed, and I drifted away from the literary scene, the idea seemed more and more improbable. At Larry's funeral, in 1996, in Richmond, California, the idea re-occurred to me. Larry had been moved to the Bay Area by his brother Richard after their Mother had died, and had, for about a decade, lived in a communal household that included Robert Grenier. In due course, Bob revealed that he too had envisioned an eventual collected poems project, in preparation for which, he had collaborated with Larry over the years to produce perfected typescripts of over a thousand pages of Larry's best work. This was done on an IBM Selectric Typewriter, with its old bouncing font-ball and brisk automated carriage-return. It was clear that, whatever the eventual venue, this body of edited material would form the core of any consolidated collection of Larry's life-work.
Without either the two archives at Kansas and  Stanford, or Grenier's perfected/edited text file, editing Eigner's collected poems would probably have been a nearly impossible task.
In 1996, the same year of Larry's funeral, my own son Randall Matthew died in an automobile accident in Hayward. For several years, this tragic event overshadowed our lives, and caused us to put thoughts about projects and plans aside. As I approached retirement, after 25 years working with the Federal Government, I realized that I would, for the first time in decades, be in a position to devote some serious attention to things that had lain dormant in memory. When I retired in August 2001, just 10 days before 9/11, I approached Robert Grenier with the suggestion that we explore the possibility of editing Eigner's Collected Poems for publication. I felt that, if this were not done pretty soon, it might never happen, not least because those who knew Larry's work, and who would be in a position to understand and facilitate it, were moving on, and growing old. Bob, who was living in Bolinas, was reluctant. Though he had always promised himself that if the occasion arose, he would certainly do this great task, he of all people knew of its enormity, having lived intimately with Larry (and his manuscripts) for many years. "Think of this as a collaboration," I told him, "in which I am the "facilitator"--i.e., the one who types and reconnoiters copies and serves as a sort of major domo. Tentatively, he agreed to the idea.
At this point, one must understand, we had no idea where the book (or books) might be published. We inquired at several places. In due course, Bob prevailed upon his old Harvard modern literature professor Robert Gelpi, who had recently retired (emeritus) from Stanford University's Department of English. Gelpi proposed the project to Stanford University Press, and with the support of, among others, Robert Creeley, our application was approved. We signed the contract in 2004--though our work on it had been ongoing for at least a year previous to this.
End Part I
[In the next two subsequent parts of this narrative, I'll address the questions and problems we encountered in editing the text.]
Posted by Curtis Faville at 7:11 AM

congratulations on seeing to completion a lifelone dream of publishing the works of a great writer.

And my condolences to you and family on the tragic death of your son.

uh ah have one of his books around here, or is it his wifey's.

Actually enjoyed some of it, once...


Congrats on big Steinford book, Sir F.and enjoy your site, even if I am not always in agreement, or understanding...(then Pynchon and PK Dick are my mentors, rather than Pound or ..PMS Eliot..). Looking forward to...scans!

Some hepsters are hatched... posthumously

Curtis, I'm curious if you ever doubted the need for this project during its long process. Also, did you fight with Grenier a lot?

What doubts do you have about the project?

Isn't this too much poetry for one person to have produced?

One of my problems with the Black Mountain School is that there is a lot of data that hasn't been turned into ... anything else. It's just data.

and, as you should know by now:

"everything is in the details"

everything else is merely opinion

title of my next magnum opus?


( now to the poems themselves and the images conjured UP

Working with poets can be a good education. Corso's poetry grew in stature as I worked on it, as did Codrescu's. Now that I am working on Marianne Moore, I realize that this is a spectacular poet -- my estimation of her writing has risen and risen. I don't yet want to say here what I gleaned from each.

Curtis, did you have that experience working with Eigner? Can you tell us how your estimation grew, and new knew things after the experience? I know, it's hard to put it in a comment box, but just give us an inkling.

What did Eigner think of Herbert Hoover, or Richard Nixon?