Sam Abell - National Geographic Stylist to the Nth - Some Captions 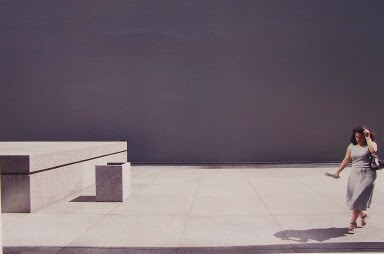 My proclivities as a photographer tend towards the abstract, and to landscape specifically. Brett Weston is my hero. But I like all kinds of photographic imagery, and I like to think I can appreciate worthy efforts far afield of my primary focus.
One star in the pantheon of National Geographic freelance photo-journalists is Sam Abell. Abell's images--taken from around the world, in a wide variety of venues, in many different kinds of assignments--transcend the documentary purpose of most of his contract work, achieving a metaphysical quality which puts them among the finest of its kind.
I'm not religious by inclination or education, but I feel--and I'm certainly not alone here--that Abell's images bespeak a spiritual insight that informs his vision, allowing him to probe deeply into space and across perspectives to find telling conjunctions, silences and messages hidden in likely, or sometimes very unlikely, places. The ability to see, to see effectively, and to capture such images is like a gift. It can't be taught, but those who understand and appreciate it share a common bond, a joy and awareness akin to an almost spiritual experience.
Not that this kind of experience is limited to apprehensions of the sacred, or great beauty, or tenderness, or awe. This ability may be expressed as a vision of utter emptiness, or surreal dislocation, or gaunt forces, even ugliness. Lewis Baltz's work, for instance, very successfully conveys the technological purity and abstraction of mindless elaboration, or rampant, stoned exploitation; his images are "ugly" but also quite beautiful examples of what they are--they inhabit the stark alienation of their subject(s).
But Abell's imagery is much more gracious and salutary than this. His color images, selected (one suspects) from a vast bank of opportunistic snapshots, cover a wide range of possible ways of seeing the world, both wild and tame, both crowded and barren--wherever, as it must happen, his travels may take him, on assignment or just out in the world. Abell's work is both vicariously shrewd, and also, in other moods, contemplative and patient. For the alert, watchful photographer, there are many such moments, though the chances of capitalizing on them are never great. The "decisive moment" may be as elusive in nature as it is in human society.
I've chosen a series of images from his book Stay This Moment [Eastman Kodak, 1990], an early monograph of his work, to illustrate the range and style of his imagery.
The photo at the top is an example of the effective framing of geometrically severe lines, contrasted against an isolated human presence, which both emphasizes the severity, and softens and balances it: The picture is a conversation between--a teeter-totter or scale on a fulcrum--only a momentary, fleeting instant, but held in serene tension. The cool white stone (or concrete), and pale lavender of the wall are perfectly suited for the mood of the impression. 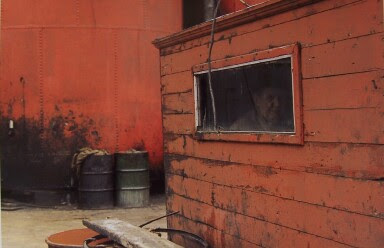 The palette of oranges, a lovely rusty, junkiness pervades the industrial weathered exteriors, within which the obscured, screened-in view of a man in a window seems an ambiguous presence. Whether or not he "belongs" in the picture depends upon conditions and information which the viewer lacks. Sometimes picture compositions are so peculiarly intriguing that we may have difficulty making sense of their simple structure, or significance. Aside from the beauty of the color of the surfaces, this composition is one of those instances.
People on trains seem to be moving in a different reality. They're moving and we're still, or they're still and we're moving--either way, we seem separated from them. What we see through the windows, as they pass, or pause momentarily, may be as casual, or interesting, as what the passengers see as they look out at the passing world (and us). The beauty of this image works on several levels--literally--as the lines of metal car-siding, blue, striated, grey, reddish-orange, which sandwich the band of "human" activity seen though the height of the windows, and the "business" part of the car, the machinery of the wheels etc., underneath. These strong horizontal bands suggest the inertial movement of the train, of which this one, arbitrary segment is an integral part. The variance of human activity--the passngers in one window, the busman in another, suggest the distinction of roles, each window a view of delegated identity. The flatness of the plane is rigidly pictorial, two-dimensional. The segmented portion of the train we see suggests an infinite series, a journey through time, one frame of which (like the window frames) we are given to observe. 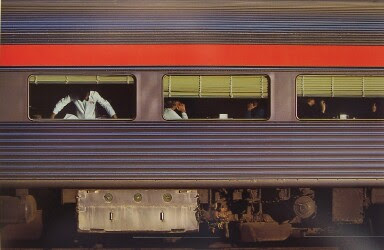 A mirror suggest quietude, water on the smoothed surface of a lake, a recreational access, caught in the early hours of dawn, before morning shivers, a perfect reflection. Steadies the eye and the mind. The breath held, thought stilled. 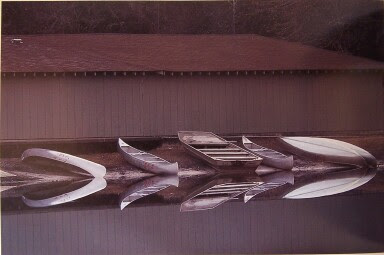 Here the stillness, of a confined space, metaphorizes fragments of vertical bars. The implication of confinement, of a circumscribed compass, drearily reflected off random shapes of puddles, makes a pattern that is unsuspected, worrisome. The space may be no more than a simple entry room, or basement floor, but the photograph only offers what's available for viewing. Abell's tricks sometimes are gratuitously selective, basking in an unearned gratuitous limitation. This is part of what makes such image-making exciting, but the risk is always at the edge of cheat. I've seen many images of hands, some quite like this one. Hands are expressive, especially when aged, bearing the scars and use of decades. Hands are the mind's calipers; they tell stories, they tie knots, they commit crimes, they make love. Yet they are innocent of all blame. They are amazing. 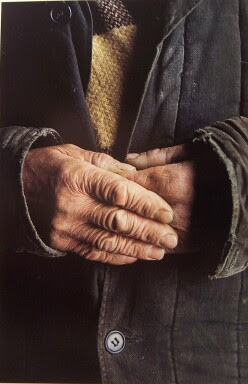 One of the goals of photojournalism, is to get as much "happening" in a picture as possible. Near and far, the whole frame, action, interaction, accident and intention, opportunity and organized saturation. As an example of this kind of total involvement, the branding action out on the prairie is textbook: Three planes of activity, moving simultaneously, including the stationary observer on the left, the hand holding a red plastic pail on the right, the sequential character of the tasking--chasing, catching and branding--the variety of textures, the dark blue of the cloud in the background throwing the whole scene into a darker, subdued, mood, the matter-of-fact going-about-their-business of real contemporary cowboys. It's all a ballet of action, stresses of movement, syncopating parts moving in a random unison, a fine chaos of discordant gestures captured, like the calves, in a perfect picture. 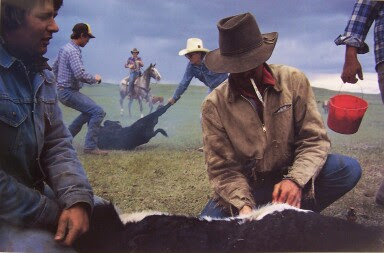 This is blue, or a blue in which the whole universe is contained. A blue so deep, so intense, so saturate, so mythic, it encompasses generations, millennia, worlds. The studded belt is a spell, as great as the Milky Way. 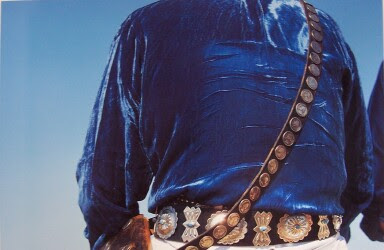 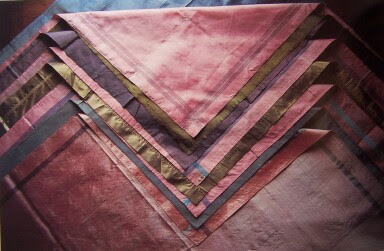 Lines may seem to merge into haze. The mathematical precision of receding templates. "Those capable of arresting thought at a point demanded by history thus enter the stillness of perspective." 1 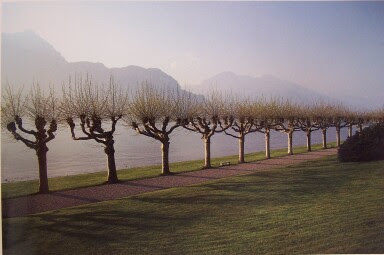 In Zen, the arrangment of objects in nature is seen to possess a magical property, like a mathematical equation which is very difficult to decipher. Carp (goldfish) aimlessly cruising the murk, circumscribed by the limits of the imagination, within which a flower opens. There are six things, placed at random within a rectangle. Can you guess what the riddle says? 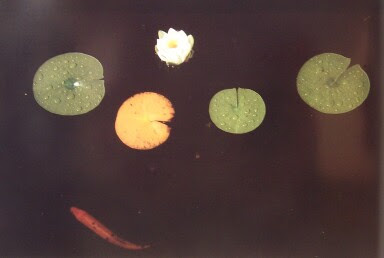 A delicate balance between the decorative nicety of the sensuous touches of green, played against the half-nude man barely perceived behind a screen door. The textures are seductive, and our curiosity (or perhaps apprehension) about the man is balanced by the opacity, the obdurateness of the wall. 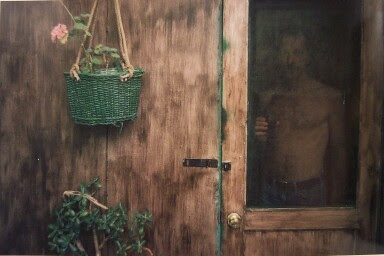 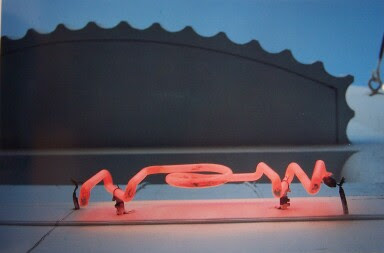 What the eye thinks it sees is an organization of contexts, and assumptions based on previous experience. If we see snow, we must associate ice. If we see sun, we think red spectrum. Cool blue signifies absence of heat, unless other queues (clues) tip us off. A sign floating at the edge of an apparent expanse of ice may suggest an ice-taxi. Ice taxi?? Leafless trees, igloos. We may be on another planet. Except this is Greece, and a man's face may appear black in the white-out of the sun's continual flash. 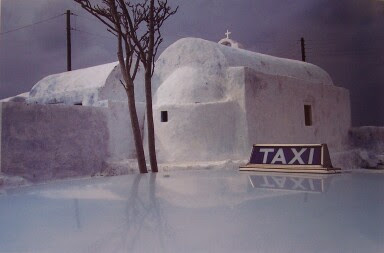 Perception is a trick. Getting behind the presumptions of how we see and feel isn't easy. We may only catch glimpses. But they're there, if we only can find them, be alert to their presence.
___________
1 From "Act", in Wittgenstein's Door, by Curtis Faville, Tuumba Press, Berkeley, 1980.
Posted by Curtis Faville at 7:55 PM


I like that! and, also, try to be receptive to what
comes your way... entirely..

etcs ... the images on a page of photo-paper, or typing paper

with it s concomitant narrative
(can be) Pure Magic... if one lets it

Ah St. Ludwig. Patterns, family resemblance, the language-game: all rather splendid to those who can afford 'em--like Oxford students (or UC/Steinford/Ivy league).

See Witt.'s Poker for the wrong side of St. Ludwig