The Sting - 3 Layers of Nostalgia 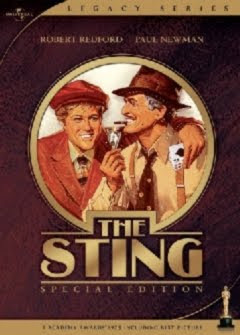 It's not difficult to account for the easy success of George Roy Hill's The Sting [1973]. A brilliantly designed production, which starred the duo of Paul Newman and Robert Redford (they had previously done Butch Cassidy in 1969, establishing a natural working relationship), it forged a vision of Depression Era America which is part noir cliche, part comic satire, and part straight drama.
The film was a runaway success at the Oscars, walking away with Best Picture, Best Director, Best Music Score, Best Costume Design (Edith Head), Best Film Editing, Best Art-Set Decoration, and Best Screenplay. Plus Golden Globe Best Picture. They must have been doing something right! 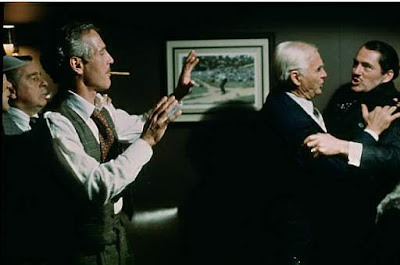 The film will forever be remembered for its sound-track, adapted by Marvin Hamlisch from the piano rags of Scott Joplin. Combining straight piano settings, with 'Twenties rag band adaptations, the richly evocative score almost turned the story into a musical, as the period settings and costumes and clever old-fashioned scene-cuts all were coordinated to create a seamlessly smooth narrative cartoon. Joplin's ragtime masterpieces received a much-deserved shot in the arm as a result of the success of this movie, and today, almost forty years later, it shows little evidence of abating. The long slow rendition of Solace, A Mexican Serenade, which accompanies the sadly unfortuitous assignation between Hooker and the female assassin sent to kill him, is one of cinema's most affecting sequences, capturing the melancholy loneliness of an emptied out big city diner, and later the cheap boardinghouse.
Conceived as a spoof on the 'Thirties gangster-gambler genre, the dramatic tension set up between Newman (Gondorf) and Redford (Hooker), is a master-apprentice relationship based on "grifting" as a soft criminal persona. A cynical take on hard times, the plot follows small-time con-man Johnny Hooker to Chicago, where he convinces Gondorf (the old pro) to teach him how to engineer "the big con"--against big racketeer Doyle Lonnegan (Robert Shaw)--as revenge for Lonnegan's killing Hooker's partner Luther Coleman. The delicate arrangements required to set up the very elaborate trap (sting) for the aggressively pernicious Lonnegan involve the participation of a host of colorful underground figures, including Ray Walston, Harold Gould, Eileen Brennan, Jack Kehoe and Charles Dierkop, among others. Meticulously detailed with period costumes and automobiles, elevated train tracks and gritty urban back streets, it's like an amalgam of all the high and low elements of Thirties' cinematic tropes: the whorehouse disguised as a fun-house merry-go-round, the corrupt gravel-voiced beat detective (Charles Durning), the Vaudeville stage scene, the mob hit-man, the basement betting-parlor, and so on. 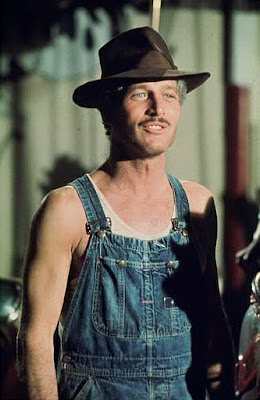 The film's social subtext of economic desperation flattens out the moral dimension, so we're allowed to root for the good crooks against the bad ones, without feeling as if we'd betrayed our values. The Seventies' anti-social theme of a survival team of swashbuckling soldiers-of-fortune--which Newman and Redford had initiated in Butch Cassidy--finds its clearest expression here, and the love interest, however subtle or under-played, is really between these two heavies, Newman the washed-out heister, Redford the bushy-tailed side-kick. 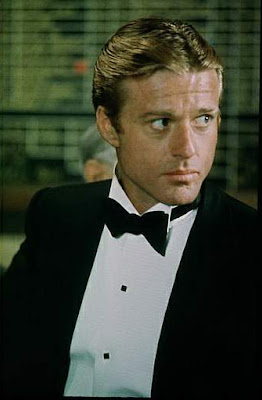 The aura of nostalgic swagger in which the film is enveloped, encourages the audience to see it in the context of the stereotypical situations and stock characters from film history, but the hard luck reality of economic depression provides a contrasting undertone: The story is all in good fun, but crime is also one plausible alternative to desperation, or righting the wrongs of a society that is corrupt from top to bottom. Doyle Lonnegan is like a banker, doing business on a grand scale, exploiting and punishing people on the edge. Gondorf and Hooker are like anti-Robin Hoods, exacting revenge on a "captain" of crime. We enjoy their risky escapades, their hair-raising schemes, and admire their moxie. In the end, we're perfectly delighted to see Lonnegan outsmarted and whisked off by the dumb cop "to avoid being seen in a place like this." Lonnegan, after all, has an image to protect! He's an upstanding citizen. 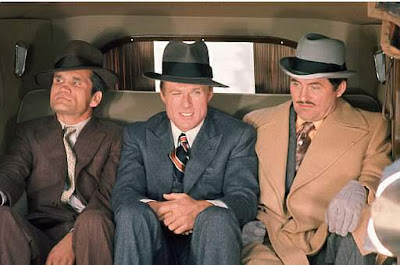 The Sting has inspired a number of attempts at Gangster Era recreations. There's The Untouchables [1987], a Kevin Kostner vehicle, and a good one. Both films use the little fillip of an ironic ending.
At the conclusion of The Sting, Gondorf asks Hooker, if bringing it off--the sting--feels good enough to assuage his grief/revenge and grifter's compulsion; Hooker thinks a moment, then shakes his head. "But it's close!" and then they both have a good laugh as the credits begin to roll. It was a great romp.
At the end of The Untouchables, Kostner (Elliott Ness) is leaving the Chicago police building when he's approached by the anxious young crime reporter. "What'll you do now that Prohibition has ended," he asks. "I'll go have a drink!" he replies. After the violence and fuss of his war against bootlegging and organized crime, the pretext is suddenly swept aside, made irrelevant. The music rises, and the camera moves up and back to reveal the dramatic perspective of the big city canyon.
Nostalgia for a past that didn't exist--except in the movies--is colored by our realization that America's history was anything but inspiring, especially for its armies of neglected and defeated. Having created our own myths of tortured violence and fluffy indulgence, we can now look back with fake pride at these competing fables, one of a fake prosperity, the other of a fake "poetic" hardship ennobled by homely virtues and ordinary decency. It's like Dead End [1937] crossed with It's A Wonderful Life [1946]. The Sting is perfectly balanced between our sense of fun and our foreboding about economic insecurity, which is what capitalism produces. The "outlaw" in each of us fantasizes about the big score, of being rewarded for being smart enough to beat the system (whatever its rules, whatever the consequences of failure), or being given the consolation of knowing we played by the rules, even as we were being tossed aside in the process.
What we know in our bones is that quasi-historical pulp fiction like this isn't the real story of America. The real story is the exploitation of the workers by the robber-barons, the bankers, the railroad companies, the factory titans, the great capitalists of the Gilded Age, and the early modern Industrial Era. The wave of social legislation that began in the 1930's, and continued after the War, lasted until the 1970's, when capital set about turning the tables once again, beginning with the "Reagan Revolution" and continuing with Bush I & II. "There was a class war," someone recently quipped, "and we lost."
It's just entertainment, after all. Does the dialectic that The Sting sets up, between the good bad guys, and the bad bad guys, tell us anything important about its subject-matter, or about our sense of national identity? What we admire in our fellow-citizens is durability, charm, grace under pressure, and guile. These are the gifts that will carry us through. These are the attributes of the underdog. The qualities we need when times get tough.
Posted by Curtis Faville at 5:54 AM

another "view" based on Damon Runyon characters and "just what it was" in New York...

I guess it is our way to turn things into a fiction and then "publish" and pass of (our) Phantasy as (our) Reality
make a movie,
go to congress, write a poem...

Shaw stole the Sting at least in terms of verisimilitude, and...irishness, even. The flick looked good, sounded good (when they hit ...Maple Leaf Rag..ah yeahh), and the plot was interesting, if a bit contrived. The celebrity-acting was alright, at least good community theatre hack-level...

The Untouchables was a better film, in terms of jazzy cinematography (instead of raggy), acting, believability (except for...Costner...Ness was a cold hard guy, not from ...malibu). Can't go wrong with De Niro as Caponay with baseball bat--

You are correct that they are still constructs of course, far more glamorous than the real 20s and 30s. Besides, Capone, Luciano and the Five Points gang had ended the irish control of NY and Chi-town (and points between) in early 20s--the old irish mobsters, or their offspring were standing in soup lines--some funded by..Caponay!--- in 20s and 30s (the myth that the depression started in '29 is mostly BS as well--more like right after WWI).