Some Remarks on Silliman's The Alphabet 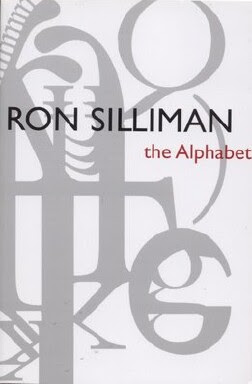 S-mans' writing hardly reaches to the degree of, say, Finnegan's wake obtuseness--where one labyrinthine paragraph might require a day or two to unravel (or it might prove ...unravelable, often with obscure sanskrit or gaelic or latinate references).

He arranges some interesting images......

"""So the book of numbers turns out to be a record of baseball pitching and playing statistics. Even after dark, the perfect weather keeps us outdoors. If it does not fit, you must acquit.

Giant spider intends a solid object. The pen crackles with electricity, blue sparks arc from tip of each letter as it emerges (burnt smell of the word itself). Iron butterfly. Sweep.""""

Better scrapbook than many,tho' at times the writing of the "language" types resembles something a like Monty Python skit--one of the boys shrieks some bizarre non-sensical words--WANKEL ROTARY ENGINE!--and the rest giggle and roll their eyes, why yes wankle rotary engine. nudge nudge

Curtis, What you're advocating is a poem that neither represents the world nor opens up the question of the representational function of the poem.

This is a work written over a period of over 30 years. An amazing unity and consistency and homogeneity of voice and style prevails over the total work of over 1000 pages. This suggests a mono-maniacal insistence which I find astonishing. It's a feat, but not one I would tend to credit, as a sustenance of spirit or intent.

I can't think of anyone now writing whose work is as interesting, or ingenious, or inventive as Donne's. Does that mean that the forms that Donne worked in are dated, or should not be explored, or that they can't be improved upon?

The Alphabet is a delightful work, filled to brimming with incredible detail, brilliant analytical wit, and overpowering formal command. And yet, somehow, it manages not to say anything specific. That's almost mysterious.

Zukofsky believed in the possibility of a grand epic, but he wrote dozens of wonderful lyrics, too.

What's wrong with this picture?

really, didn't schoolmarmies always instruct us to not write in fragments??

but as soon as one allows the fragmented sentence (ie, not a complete sentence with subject/predicate) about anything goes...the poet authentic has a command over verb structure. the beat-decorator...doesn't

reading Pound's cantos one notes that EP rarely just strings fragments together, or indulges in the hyper-assemblage or Joycean obscurity (at least of Wake, which EP did not care for...).

Catching up after being away.

"[The Alphabet] manages not to say anything specific," you say?

Hmmm. You read the book and found or came to nothing in particular about life, the perceiving of it?

On the other hand, let's say you are correct. Could you point to the commandment that requires such a thing?

I find the (two year old) book, which of course mostly was published via the installment plan for a couple decades now, a grand collage in which its well-made parade of be here now particulars among other things brighten the eyes and mind, as well as document Silliman's and to to that extent our world. And there are plenty of "specific things said" that pop up or slip into the parade . . . to say nothing of those that I myself make from what's presented and that all readers should make for themselves -- unless those readers bring a flatness of approach to the book, expecting the poet to do the work of laying it all out.

The Alphabet is a wonderful work, filled with delightful observation, a brilliantly stated kind of poetic self-awareness (consciousness), but formally, and in the particulars of its style, it's almost empty. You could take any part of it, break it up into almost any arbitrary lineation or stanzaic alignment, and the effect would be exactly the same. Is this a strength, or a weakness in the writing? Does it show control and certainty, or a lack of imagination? Other people I've talked with have much the same reaction to it: "Ron's stream of consciousness can be overwhelming, but there seems to be no overall formal compulsion--it just goes on and on and on. Starts and stops arbitrarily...."

Ketjak is a masterpiece, but what is the implication of its structure?

What is Ron's "message"? That there is NO message? Perhaps that's what you mean. If it's true, then, I think--for 30 years of labor--that's not enough.

"The message" -- is hermetic -- a secret -- that only initiates are allowed to see.

Well not really. But I do believe you gotta do some time, or know in your mind and heart what that's like, what that means for time, for today, for tomorrow, for what's seen and why, to understand what Silliman's writing "says." But I don't think I can say more.

Perhaps I've been somewhat disingenuous. There are a number of things one might deduce from Silliman's writing--but my primary complaint isn't to do with that per se. For the life of this long poem, his style has remained static, never deviating from the sequential structure he established with Ketjak. Ketjak is sort of like Berrigan's Sonnets: A single, methodological breakthrough. Berrigan was never able to get beyond that triumph, and his work didn't improve. Ron's been stuck in this groove for a very long time. The Alphabet doesn't demonstrate much in the way of formal innovation--the sections just employ the same "sentence" sequence, almost literally "poured" into various line-arrangements.

What the style implies is a call to attention, literally: An imprecation to the reader to pay closer heed to what actually is happening in one's life, a refusal to ignore the quotidian zeitgeist as it passes before us. For Ron, the observational data recorder is always running, while his critical faculty is running alongside. It's like wanting to keep five or six little machines going simultaneously.

Updike was reported to have, I think, four or five separate desks at his writing office, one for each kind of genre: Short story, novel, poem, essay, autobiography. In a feat of dexterity, he'd move from desk to desk, form to form, knocking out pages in whatever came to hand. In a way, Silliman tries to put these "desks" together in a single work, in which personal detail and theory and punning and so forth are all clamoring for inclusion.

The world looks various and tremendously fascinating to his writing self. When you talk to Ron in person, this turns into a kind of gossipy patter--he can talk, with considerable authority, on several subjects at the drop of a hat.

My problem is with the consistency. Why keep repeating the success of Ketjak? I think there's a responsibility to try new things, to get beyond a single innovation. Perhaps he never will. Perhaps he'll keep writing Ketjak over and over until he dies. There are worse things in life than consistency.

As I explained in my previous posts about Silliman and Watten and Marianne Moore, the formal prescriptions seem anterior to the compositional act, and thus quite arbitrary. It's formally quite rigid, in solving the single most challenging problem before the poem's even begun. It's like writing sonnets, only with other arbitrations of form.

i understand your abhorrence at a style that does not change: this to me (for example) separates painters of the first tier, from the second--whatever their individual excellences.

but to say it means nothing? meaning, above all, is cumulative. even in works of utmost linearity. it's not the narrative line that produces it, but the increasing interconnectivity (managed or not) between the parts that remain in memory, & the parts that have just now been perceived.

also, you could say that the final aim of this work (not unlike other monuments of modernism) is to teach one to read it.

but it's fine without saying so.

You raise an interesting question, and I'm going to answer it as an addendum to my post--since it will take more space.