Early Days: How the Division is Stacking Up

With one-fifth of the season now complete, it's interesting to take stock of the progress of the local heroes, and to estimate their chances for the post-season. Of the six big league divisions, the National League West looks the most competitive--with four teams (San Francisco, Los Angeles, San Diego, and Colorado) all clearly in the running and capable of winning.
As expected the Giants' strength has been their pitching, but surprisingly, Zito has replaced Cain as Mr. Reliable. In the fourth year of his monster seven-year contract, Barry seems finally to be yielding returns on the investment. Relying on greater control of his slider and curve, he's been like a reincarnation of his old Cy Young self. Though it's unlikely he'll continue at this pace (he was 5-0 going into last night's debacle against the Padres) for the rest of the season, if he could anchor the staff with a regular good 7 inning stint every five or six days, it would take an enormous load off the other members of the rotation. Cain, a pitcher with a history of hard-luck, has reverted to his old role, still only 2-1 after six starts. With a team ERA of 3.04, it's hard to imagine this team won't win at least 85 games. 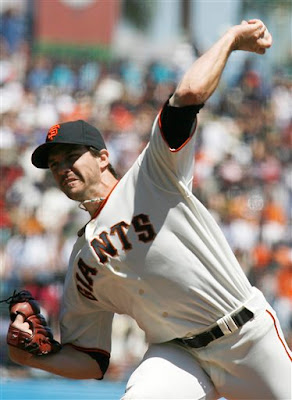 After a torrid start, Sandoval has cooled way down, experiencing the longest slump of his career so far. The best news is that during this period, the Giants have been winning anyway, largely on the strength of the hitting of Uribe, Rowand, and Schierholtz. Without a genuine slugger on the team, timely hitting and base-running are the key to an effective offense. Most gratifyingly, Bengie Molina has managed to curb his impulsiveness at the plate, is hitting .337 currently, with only 8 strike-outs (!). Most disheartening has been the performance of Mark DeRose, who repaired wrist gave out again this week, which probably will mean the effective end of his season, if he elects to undergo remedial surgery. Huff has done what had been expected of him. Renteria was hitting well before he went down (again), but his replacement Matt Downs has stepped right in his place. If Sandoval can right himself, and the rest of the squad keep up what they've been doing so far, (4.5 runs per game on average--fully a run-and-a-half-greater than the team's ERA), I see no reason why this team couldn't compete with anyone.
On paper, the Giants and the Padres are fairly evenly matched. Aside from Gonzalez, the Pads don't have that much greater punch. Their pitching staff has been performing well over their head(s), and is certain to come back down to earth soon, or at least that's the current wisdom. At their current pace (18-13. .722), the Giants would finish the regular season with 116 wins! If the Giants staff could come in with sesason numbers, for example, like these--
Zito                     17-10
Lincecum           20-6
Cain                    16-13
Sanchez              15-15
I think there's no question they'd either win the division, or run away with the Wild Card slot.
Posted by Curtis Faville at 9:44 AM

As an A's fan (who got to eavesdrop on Rick Peterson's tête-à-têtes with Barry Zito in spring training a decade ago!) I thought the Gigantes were nuts to give him that huge contract.

But the way he fell off the earth really surprised me. As did his resurrection so far this season.

Until I saw a series of 3 photos in the Contra Costa Times last week showing Zito's pitching arm snapped at release point in: 2001, 2007, and 2010. In 2007 he released the ball almost a foot higher and straight over the top. The other 2 photos were almost identical.

Evidently Righetti almost quit over his arguments with Zito, who didn't trust Rags because, unlike Rick Peterson, he's not a "scientist."

He never was & never will be Lincecum, but some of the greatest moments of my baseball life have been spent watching batters pee all over themselves trying to get out of the way of Zito's magnificent curve balls. (Which were then called strikes!)