Bruce Barnbaum (1943- ) has been a highly visible black and white fine art landscape photographer, since the appearance of his first ambitious monograph art book, Visual Symphony, in 1986. Visual Symphony was divided into four separate sections, each devoted to a specific set of images: General landscape, cathedral interiors, so-called "slit canyon" abstractions, and modern curtain-wall architectural detail studies. The success of that book was due in large part to Barnbaum's exploitation of the slit canyon work which he was among the first to pursue, overcoming the initial problems of access (these canyons are in remote areas of the Southwest, are dicey places to be inside of, and often require the presence of a second person "on the surface" for insurance), and the high/low contrast issues associated with available (sun)light illumination.
Following in the tradition of Adams in particular, Barnbaum showed himself to be interested primarily in the "big shot" effect, the overpoweringly romantic, loud, over-the-top compositions that usually impress the general public and amateur lovers of dramatic imagery. They weren't subtle, and they weren't intended to be. Barbaum's second book, Tone Poems - Book 1 follows this line of emphasis, carried to even greater lengths, accompanied by a compact disc recording of piano music by one Judith Cohen, intended to elaborate the vein of lyrical abstraction, which Barnbaum clearly feels complements his intentions.
In terms of the market, Barnbaum's work occupies a place about mid-way between the serious classical black and white landscape tradition, and the pop colorists (such as Muench) whose numerous books and calendars pay tribute to the heroic, overarching aspects of wildlands, the starkly exalted places to which photographers are always drawn. Barnbaum is different from these to the degree that he purports to uncover the lyrical, mysterious power of nature. But there is seldom anything subtle about his technique. Barnbaum invariably swings for the fences in his photographs, striving to achieve the most potent, "symphonically" charged compositions from any given subject. Whilst his range of subject-matter isn't rigidly restricted to open, empty landscape(s), his approach always moves in the same, deliberately fee-fie-foe-fum manner towards the biggest statement, the topic sentence of each argument to be drawn from any given circumstance. 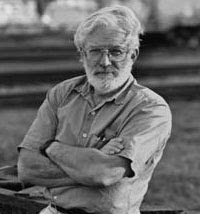 His slot (or "slit") canyon imagery--which he credits with having resuscitated his career at a point at which his reputation was static and predictable--was taken up with some fanfare in the 1980's, when this subject-matter was fresh and nearly unique. His straight landscape work was then seen in the context of the highly abstract sandstone imagery, which made it seem more ambitious, in its way, than it might otherwise have been perceived. Big shot landscape work, of course, has been around for a century, at least, going all the way back to the late 19th Century. 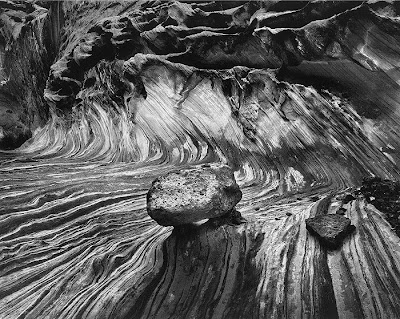 The example of Adams, in seeing the late romantic inspiration in the American landscapes (particularly of the West), has been ubiquitous in its influence. Everyone, it has seemed, wants to make a bigger, a more "enduring" and impressive picture of our dramatic indigenous outback. Though clearly following in this tradition, the work of Barnbaum (in common with others of the tribe of Adams followers) asks to be seen in the context of a sort of New Age seriousness of purpose, in which mystical or ineffable content speaks wordlessly through an imagery at once attention-getting and filled with "conviction." 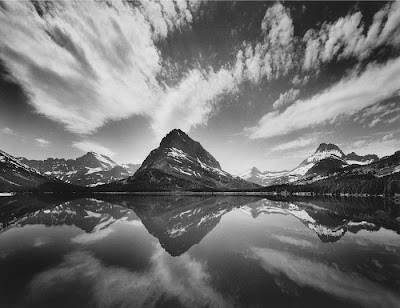 But the gratuitous connection between this visionary empasis (which is perceived as an aspect of the ambitious "bigness" of the prints) and the import of the "message" is compromised by the marketable intensity of the approach. As a careerist or marketing strategy, then, all this sturm and drang on the one hand, accompanied by a philosophical piety of claims for meaning and significance, is probably very astute. But as a viable aesthetic that might stand a little examination, it fails to convince. 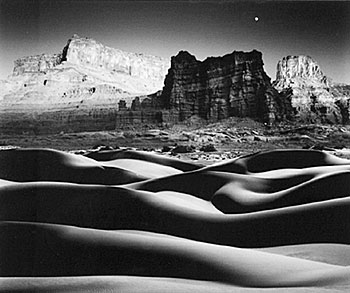 It would be rather as if Barnbaum were a composer, all his work would be in a high Beethovenian or Wagnerian mode, which isn't at all an outlandish comparison. In the history of photography, the place of photography considered as a serious medium in which strong human emotion and expression could be represented occurred rather late in the historical progression, happened, indeed, after the first wave of Modernism had taken place in literature, art and thought--after, that is, those other media had already marked out new ground and formal innovation. Strand and Adams and Weston, coming after this, were essentially picking up the threads of late romanticism and reprocessing them at the tail end of High Modernism's brackets (1905-1940). Post-Modernism in photography, wouldn't begin until the mid-1950's, when Sommer and Callahan and others were moving beyond two-dimensional shock and awe, at a time when Modernism had already been pushed aside by Abstract Expressionism, a-tonality, the meta-novel, neo-classicism and Rationalism in architecture, etc.
The pompous banal, characterized by Adams's empty "big" landscapes of the 1940's and 1950's--and the late attempts by him (and his estate) to perpetuate this heroic stereotype of the "great" ecological visionary-genius--was continued, almost without question by his followers and disciples and acolytes. 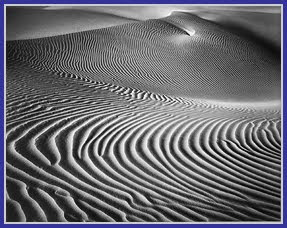 There is no question that Barnbaum is an impressive craftsman, in the same way that Sexton or a dozen other such figures are, but the aesthetic point has never been about the mastery of a craft, or the ability of a darkroom night-owl to render chemical miracles out of the slosh of developers. The point has always been what the finished image contains, and what we can deduce about it, carefully considered, over time. 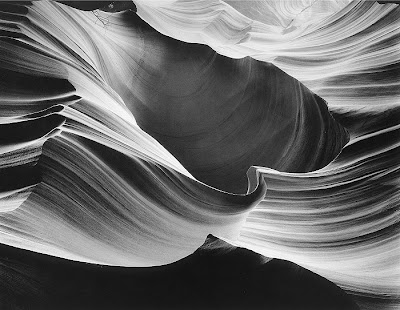 The abiding impression which an image of Barnbaum's makes is of a potent ambition, of a bombastic drive towards authoritative command; but the real result of all this emphatic chest-thumping is of ambivalence towards subject-matter in general. If the point of all the images is to impress the viewer with the extremity of their exultation, or awe, or joy, there is no compensating range by which to impute a whole, healthy view of the world. 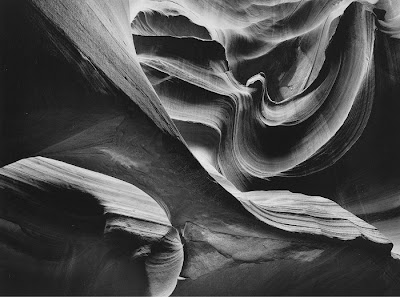 Imagery as deliberately pushy and gaunt and glowering as this leaves one with the impression that the only artistic response to nature is of grandeur or stupendous determined demonstration. But if awe is all one feels, and wrenching intensity is the only way to express this awe, there is a poverty of human means.
The earth is the result of calamitous forces. The surface of the earth is the evidence of millions of years of upheaval and fearsome, though often in geologically defined time very slow, majestic change. But our response to this record need not be unrelievedly breathtaking, or theatrical.
In historical terms, this kind of response has been done already over and over, overdone, really, to the degree that further elaborations and extensions of the mode have come to seem very redundant.
As a landscape photographer myself, I can hardly claim to be immune from the attractions of the big shot, the panoramic layout that begs to be seen, again and again, or even, given a little luck and energetic pursuit, perhaps for the first time or in an entirely new way. To hold out the potential for increasingly extreme versions of these same perspectives, however, seems a kind of dead-end. 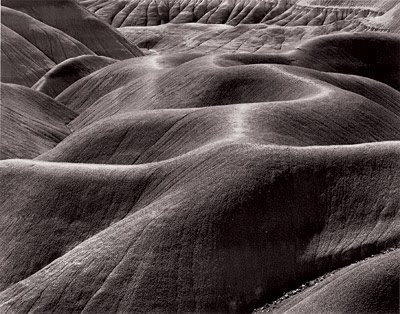 We may always be drawn to the fascinating viewpoint, the vivid example, the unexpected or striking angle. But what we "see" in this opportunity need not be a repetition or rehashing of what others before us perceived. What distinguishes the talented craftsman from the artist is the ability to see differently, to bring to familiar or unfamiliar material a vision that is neither borrowed, nor impulsively forced. It's this ability that made/makes Edward Weston's startling images  as fresh and fascinating as they looked fifty years ago. It's a standard that few bring to the practice of serious photography.
Posted by Curtis Faville at 9:17 AM

I hate this stuff. Not sure why I do. I hate it, though.

You write, "The point has always been what the finished image contains, and what we can deduce about it, carefully considered, over time."

And you write it like there's some friggin' rule that so commands.

But nope, there ain't. There's a lot of points of the kind you make, maybe as many as there are people who look at photos.

The point that pokes my third eye the sharpest is whether the finished image (or whatever) has in it the marvelous (cf Andre Breton), rewards a detailed (close) examination, and bears repeated look-sees or read-throughs (tends to the ever-fresh).

The pictures you show here got all that. And they have a very 'shroomy feel to 'em too, or so I imagine. Especially that one with the waved-up dunes (nice touch with the frame in blue).

P.S. I reserve judgment on whether these or similar Barnbaum images are well-suited for pairing with pre-recorded piano music. I'd have to give it a listen. It sounds as if it'd be a dippy no-go, but on the other hand, I was blown away in 1996 by an exhibition in which Bruce Conner paired a dozen or so of his small paper collages, made of reproductions of 19th century wood engraving images, with recordings of early Renaissance harp music. It was out of this world!

There are as many ways of looking at pictures as there are people to look at them.

When you get past the initial kinds of considerations about what people feel about "wowzy" nature photos, you get into the finer distinctions. Pop nature landscapes may have the same qualities as "serious" work, but I try to look at the artist's whole work, not just at a single image, or each image isolated against a blank backdrop of contextlessness.

Barnbaum's images ARE powerful, and many of them have admirable qualities. But the whole, taken as a fully integrated mass, tells a different story.

Serious art landscape photographers have basically two possible markets: Sales from individual prints, and photo illustration in very selected venues. Photographers may also teach workshops, or work in their own trade (though the digital age has taken most of that donkey-work away).

Careerists like Barnbaum always seem to have one eye on their (not very sophisticated) audience of potential customers (for framed prints), and one eye on their legacy. I suppose that's true of almost all committed artists (with a very few exceptions).

Trying to make every image an adjunct to Beethoven's Ninth is a little overbearing. Don't you think? I mean, how many glowering rages can you fit into a single life, or a single day?

should, unconditionally,
clear these "points" up

that last image/photograph
is INCREDIBLE ...


((I just made that word up so as to get to a farther point and view...

terrific conclusion to your post however, it could be 'tweeked' a bit...

in y'all's spare time do read, get AND inhale

Barnbaum (in that last image that you included) sees Mother Earth through MY eyes!!! DIG IT?

"Glowering rages," not many. "Glowing raves," no limits. See William Blake re the road and too much.

A single day--probably too much.