I cannot say enough about Lee Friedlander's new book, America by Car [San Francisco: Fraenkel Gallery, Published by D.A.P./Distributed Art Publishers, Inc., New York, 2010]. I don't think it would be inaccurate to say Friedlander's work was originally viewed as part of the 1950's and 1960's social documentarian style, with strong elements of humor, verité, naturalism, sensationalism, candid, and photo-journalism. Along the way, he began to value print quality over mere reportage, and by the time of his big American Monument [Eakins Press] book in 1976, he'd moved into position as one of the supreme image perfectionists, working closely with technicians and printers to realize fully his expanding, symphonic vision of contemporary America in all its heroic, surreal and madcap splendour. 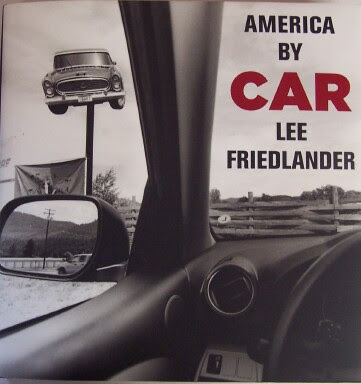 There is no way to simplify Friedlander's work. He's produced interesting imagery across a wide range of subject matter. Urban, rural, human, mechanical, majestic, subtle, reductive, complex, etc. Increasingly, he has been able to emphasize the tonal sensuality of the straight-line gradations, despite working with traditionally small format equipment.
Friedlander has never been a visual purist. His pictures inevitably incorporate the extraneous detail, the confusing angle, the obtrusive pole or fence-line or broken curb, and he used this detritus and interposing clutter compositions fraught with tension, to create spacial statements of total, spanning integrity. Where most photographers work hard to keep impositions and unwanted fuss out of the frame, Friedlander has shown how inclusiveness and acceptance of this "stuff" can tell a better story, truer and fuller and more interesting than the "empty" canvas of studied "compositions." 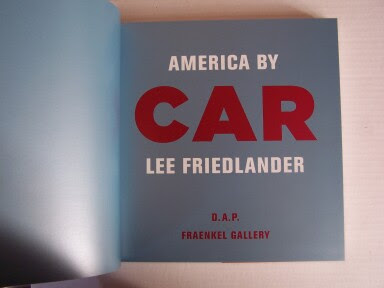 Understand that I have never been a fan of photo-journalism per se, I've never been inspired by fat ladies waddling down main street, babies eating melting ice-cream, jumping dogs, or smears of graffiti on the sides of abandoned warehouses. But Friedlander sees all this human chaos, as well as our built environment with all its jagged, industrial, commoditized, air-conditioned alienation, in addition to the gaunt, shrugging thrusts of earth, the tenuous sinewy, grip of nature which inspires so much landscape photography. 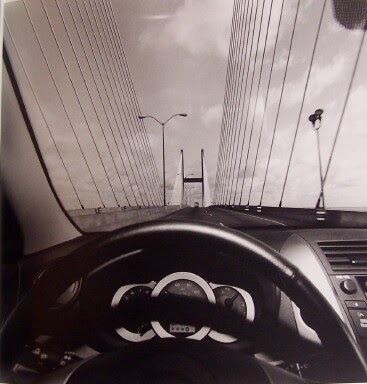 Foremost, for good or ill, we are a car culture. The automobile informs nearly every aspect of our existence, from our connection to work, sustenance (food), the materials of living, to our human contacts, recreation, travel, and psychological sense of locus--the proprioception--of our place on earth, in space. This has now been so for over a century. How we apprehend our environment is largely dictated by how we see the world from inside automobiles or trucks or busses. We "see" the world from the driver's or passenger seat(s) of vehicles. And the world presents itself to us as a continuous unfolding sequence of signs, barriers, views--of warnings, directions, seductions, cautionary scenes. Inside a vehicle, we are transported, we are passive observers partially insulated from the "reality" of the external world. Like astronauts, we pass through space in high-tech cock-pits, breathing controlled air, listening to music or news, as the purring motor--responsive to our commands--carries us over smooth asphalt or black-top surfaces along pre-arranged routes. 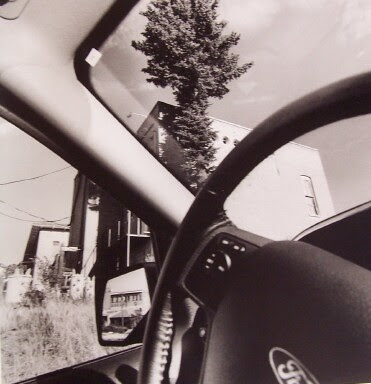 Our experience of life is framed inside the windowed interior of vehicles. In America, since the automobile became the dominant mode of transport, our style of life has always been organized and shaped around the access and needs of cars. We eat in cars, we make love in cars, we can even be born, and die in cars. Cars are a pastime, a sport, a hobby, a necessity, a luxury, a nuisance, and a window on the world. 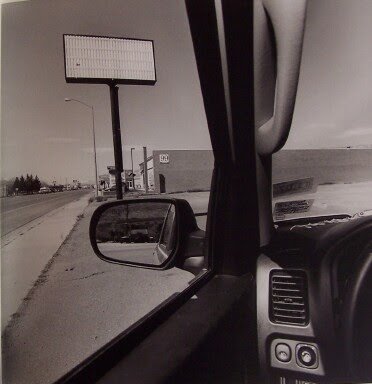 It is in this last aspect that Friedlander has made this body of work, using the interior of the contemporary sedan, to frame and explore the external world as seen behind the laminated and curved glass of the windshield and sliding side-windows, with the swooping posts and dashboard, steering-wheel, the curving hood and sleek side-panels intruding and shaping and distorting the visual space. 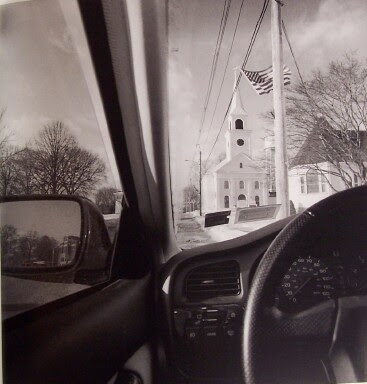 The world we see outside the containment of the vehicle both is, and is not, connected to the internal space we occupy. These views and partial compositions are fragments of landscape, architecture, signage, people, animals, situations, which exist in a fleeting panorama of action and distraction, the totality of which makes up the accreting experience of a journey--memorable and filled with meanings. By foregrounding the interior of the vehicle, the car becomes a metaphor for the camera itself--and, by extension, the eye. As we look "out" of the car windows we're making a mental movie of the world passing by--composed of thousands, tens of thousands, of little views and pictures, each unconsciously framed inside the steel roof, supports, glass, insulation and plastic. 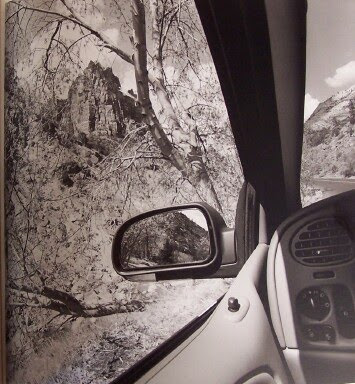 The visionary American landscape is nowhere more characteristically indigenous than when seen from inside an automobile. Who would have thought to use the literal interior of an automobile to record the breadth and range of our American scene? Perhaps only Lee Friedlander. In nearly 200 sensuous, astonishingly clear, and fascinating black and white images, we experience the world which can be seen on the road. Jack Kerouac had a thing about crossing and re-crossing the breadth of America, recording it and sampling it in all its variousness and regional flavors, and others have had a similar vision. Whitman, Olson, Walker Evans. Paul Theroux seems to want to walk to every remote corner of the globe, and write about it. 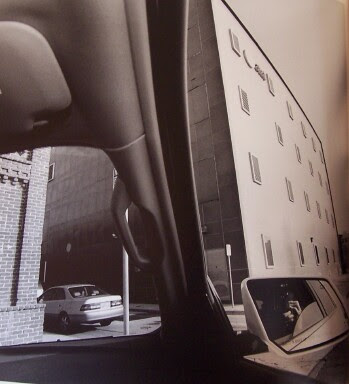 In Friedlander's version, the picturesqueness and ugliness appear to merge seamlessly into a continuous canvas--but ethically neutral--as if seeing itself were its own justification, sans any preconceptions or moralizing about consequences or causes. Updike once said of Martin Amis that he thought Amis wanted to "cover the earth in fiction." Friedlander wants to cover the earth with/in photographs.
Posted by Curtis Faville at 3:51 PM


No, Curtis, we (USA) have not been a car culture for "close to a century." More like 60 years, and its a big difference.

Don't you talk to old-timers? They'll tell you cars were something of a novelty, not owned by most Americans until after World War II. Before the war you could easily play ball, as a kid, in all but the major streets of San Francisco, for example. After the war: nope.

Read the history books? Learn what the rubber (tire) companies and others did (as with the Key public transit system) in teh late 1940s.

Remember your Keroauc? When was On The Road written and when was it published?

I think in an imaginative sense--which is how I am using this statement--I think it's true.

My stepfather was born in 1901. He told me at some length about the progress of the inventions that came to semi-rural Wisconsin (a working farm about 30 miles north of Madison) during the period 1905-1925, and cars came in pretty quickly. People were completely diverted by the new invention. By the end of WWI everyone who could afford one was getting one. By 1925, people weren't "riding" into town, they were motoring.

with wooden spoke wheels with rubber tires and running-boards..

her brother had a chicken farm outside of Baltimore and also had first a horse-drawn wagon and the about 1915 a Packard truck
after moving to D.C. the family in the grocery business had many cars with the back seat taken out so groceries cld be transported from The Florida Avenue Market back to the store.

Goodrich and Goodyear and the other rubber tire manufactures who made BIG BUCKS by selling their huge rubber tires to the bus company her in the late 50's made sure street cars with iron wheels which lasted "forever" were gotten rid of. Now D.C. is trying to bring back street cars!

the trip out-and-back toke me about 5 weeks. I mostly slept on the back seat of the car. For company I picked up many hitch-hikers some of them even "sprung" for gas... for food...for sex!

used to love the smell of the gasoline/lead fumes as it went into the tank.

must be his Surreal Eye
de:veloping

a step away from Man Ray
minus the poetry


once I drove non-stop from Berkeley to D.C.

it took 3 days and 2wo nights..
when I got home my hands were swollen and when my mother opened the door I fell on front down on the
gold wall to wall synthetic carpet

when I awoke I was sweating sweat laying on the plastic-covered ball-and-claw couch.

being non-christi'n I n'ver did have a plastic jesus on the dash... I had a pair of fuzzy dice.

We're at the 45th anniversary of the Berkeley poetry conference; in two years we'll be at the 45th of Szarkowski's "New Documents" exhibition, with LF the sole survivor--and a national treasure, "Free, a genius, an embarrassment / Like the Indian, the buffalo // Like Yellowstone National Park."

Kerouac rode trains, or on the back of flatbed trucks as often as he did in autos, right--tho' OTR did feature that one bodacious roadtrip with Dean Moriarty at the wheel of an old Buick or somethin, Sal ridin' shotgun when they headed back east (and...supposedly cleaned up, for the PG-13 version of OTR, instead of the X) . Nothin' like Denver car thief-on-meth and cheap whiskey kix.

But I agree America's a car culture and has been since 50s or so. Then seeing the usual 405 AM traffic mash up you can't hardly but feel (at least those us not in benzes, hummers, lexuses, porsches etc) tempted to reach for the yr notes to Bakunin....

I'm old enough to remember the car-centeredness of even a sleepy half-intellectual half-middleclass town like Berkeley California before WWII. Model A's (and the occasional B), rumble seats, plush-upholstered fancy cars, crank-to-starts… it was definitely a focus of daily life, even among those on the poor side (as most we knew were).