At the Compass Rose, one of our firm convictions is that the new Taser weapon technology was a very bad idea from the start, and the trend across the nation of adopting these new "stun" guns for common use by municipal police department forces in the field opens a whole new sphere for potential abuse of legal authority.
In the Mehserle case, a young, inexperienced Bay Area Rapid Transit officer was called into a scene as a back-up, to assist in quelling a near-riot on the Oakland Line train and platform. When he arrived, the situation was only partially resolved, and several obstreperous young African American males, identified as primary participants in the melee, were in the process of being detained, and arrested. Mehserle was not aware of whether these men were armed or unarmed, and in the general confusion, with BART patrons screaming and milling about very nearby, the situation verged on chaos. At any moment, members of the crowd might riot, and given this tension, if any of the young hooligans involved in the incident had been armed, any or all of the officers would have been at great risk.
I am not a lawyer, and I can't debate the various remedies proposed by the Prosecution or Judge in Los Angeles. Apparently, the jury has been instructed to waive a possible Murder One conviction, since Mehserle could not be shown to have premeditated the act. However, there appear to be a couple of obvious things to note.
1) Mehserle did not intend to shoot Grant with his pistol. You would have to believe that Mehserle was either mentally deranged--a diagnosis that no one (including the Prosecution) has suggested--or that, under the pressure of the moment, he simply went haywire and, in full view of his fellow officers, and a large crowd of witnesses, he "decided" to use lethal force. A mental incapacity defense might have been one possible choice among those available to Mehserle, but it was decided not to employ this, since Mehserle had no history of mental instability.
2) Given his behavior at the scene of the crime, stating his complete surprise in the confusion of the moment that he had in fact shot Grant with his pistol, instead of his Taser, it's inconsistent with a belief that he acted deliberately and with malice. It's much more likely, given the circumstances, that he mistook his service revolver for his Taser weapon, and used one thinking it was the other. 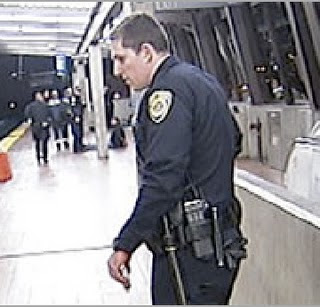 Locally, there's been a good deal of public sentiment directed at Mehserle. The African American community has risen up in protest against what it sees as a "racist" act of violence, and has threatened to riot if the verdict doesn't satisfy their sense of justice. I find this all a little odd.
Following the O.J. Simpson trial in 1995, public sentiment was neatly divided along racial lines. The White community believed that Simpson had escaped justice, in being found not guilty on technical grounds (for the premeditated knifing murder of Nicole Brown Simpson and Ronald Goldman). Though Simpson had clearly done the deed (blood of the victims was found in his car), the African American community preferred to think that justice had been served, and were satisfied that one of their own could get away with a crime, just as they believed white people routinely did in our system of justice. It didn't seem to concern them that systemic corruption isn't made all right by performing more corruption within the system.
Having tried Mehserle and found him guilty, the African American community now apparently wants to see real "justice" in the form of a murder conviction, and if they don't get it they've threatened to riot in protest. Business owners and public service establishments in Oakland are preparing for the worst, nailing up plywood barriers over their street fronts.
Personally, I don't think Mehserle intended to kill Oscar Grant. If he had wanted to disable Grant, he could obviously have shot him in the leg or shoulder; shooting him directly in the back supports his allegation that he was using the stun gun, and not his pistol. I think of him as a victim of circumstances, and guilty (at most) of poor judgment, or perhaps poor performance. But Oscar Grant--despite what you may think of him as a man--did not deserve to die--in the way he did---even if he had been packing a weapon. An involuntary manslaughter conviction is probably the best outcome we could hope for here. 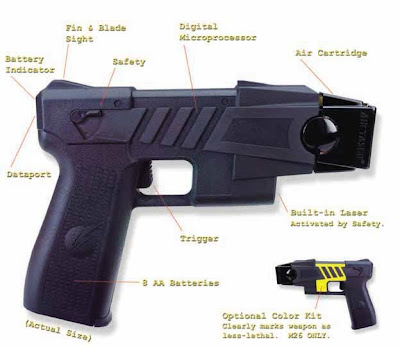 But the real issue here is the use of Tasers. Even if you believe that Mehserle's testimony about his confusion between weapons is a fabrication, it's a fabrication built upon opportunity, and that opportunity was made possible by the department's policy of authorizing the carrying of Tasers by its officers.
As long as these dangerous toys continue to be used by officers in the street, there will be abuse of them, and further instances of the kind of "confusion" that happened in the Mehserle case.
Tasers must be outlawed!
Posted by Curtis Faville at 6:44 AM

I say pin 187 on Mehserle, at least life in prison w-o possibility of parole. At the time, I thought the o-town homies should have just capped the freak (perhaps he's insane...another complication. either way, life in prison)--and Im not defending gangsters. One of the most stupid, deranged acts of last 20 years, since Rodney King.

Tasers are nasty, but hardly as dangerous as glocks, Sir F. Only allowing non-lethal weapons might work (except in extreme circumstances). A person will walk away from a stun gun, badly shaken, but back to normal in a few hours. Not the case with 9mm. Im against gangsters and thugs (and avoid alameda-land), but the cops have too much power now. You've got to see, like, an LAPD raid on some suspected druggies to get an idea of their paramilitary force. 'Copters, dozens of thugs in riot gear, machine guns, GPS guided cars, a tank or two--for like two or three tweakers. Right out of Orwell or PK Dick

The fact that the African American Community is threatening to rebel is very juvenile, and they seem to be jumping at the first thing they can sink their teeth into to make their presence known. They have ever right to make their statments known and i am happy that the are exercizing their rights to do so to make the communities opinion known. Thats why we have the justice system and we have Jurors to do that job. But not everyone was there and saw what happened, or know the facts behind the entire situation.
what you wont hear is how Mehserle was trying to handcuff Grant, but grant was resisting and had his right hand under his stomach. Earlier that day Mehserle arrested someone who was also resisting and once he handcuffed and did a search of the persons he removed a pistol from his front right pocket. So anyone in law enforcement might be more concerned and aware/scared the rest of their shift because they could of easily had a gun drawn on them. So mehserle had every right to stun him, also him being worried about Grant having a gun ( due to procedure and the fact that he made an arrest with someone doing the same thing but with a gun) he acted quickly ( maybe out of fear, and concern for his saftey and saftey of his piers) so he took a split second action and drew his tazer ( in fact a gun ) and fired. But what you also wont find easily is the training he's had, how he was trained, and the training you can see in the videos all over the web. So to start bart did not issue tazers every shift to every person, so they arent very familiar or used to having them on at all times. So its a unfamiliar tool to alot of the bart officers. Also they holster configuration had the gun and tazer on a "side draw" which means their on the same side on the hip. Compared to a "Cross draw" where it would be on the front, and opposite side of the belt so the officers would cross his arm to grab the holster. But in Mehserles case it was a side draw configuration. Also they train them to stand up straight and hold the gun farther away for a Tazer prong spread ( tazers use 2 prongs in the projectile, a wider spread will deliver more stopping power ) And in the videos you can see him drawing, backing away for a prong spread ( approx 2ft ) and firing, holding the tazer , like a tazer not a gun ( very loose ) and the obvious suprise in his face and his following actions made it clear he didnt intend to use a pistol. In an interview he said his first thoughts ( many thoughts were being processed very fast i presume) He thought his tazer had malfunctioned, but apon tuning grants body and seein the bullet wound he realized the situation and acted accordingly the best way he could. There are alot of circumstances that i personally dont know and alot of the community doesnt know and arent willing to listen. he was convicted of involuntary man slaughter which i completely agree on and he will be serving time ( with time served ) and im sure he agrees with the sentencing as well. He made a mistake acting as an agent of the state and is being punished for it. I believe hes recieving the madatory minumum for involuntary man slaughter which is something i also agree on. But there was no malice or intent so he does not deserve anything higher than the minimum of involuntary M.S. and by no means First degree murder.