Tom Jones was probably the most commercially successful of the so-called British New Wave movies. It may be difficult now to understand how unusual it seemed when it first was released [in 1963], because many of its signature innovations were adopted and incorporated into film making practice in the following decades.
The idea of turning a picaresque 18th Century comedic narrative [1749] into an earthy, effervescent cinematic romp was a relatively new idea, at the time. But the film's success--it won Oscars for Best Director (Tony Richardson), Best Film, Best Musical Score, and Best Writing (John Osborne)--with six more nominations to boot--was not only a revelation about the talent of the participants, but a commentary about the changing values of the times. Coming at the beginning of the Sixties, the picture signaled a transformation of sentiment, away from the traditional investment in security, class and duty, to an emerging resurgence of interest in sincerity, freedom and sensual indulgence. It was a movie for its time.
Unlike the gritty, contemporary, socially conscious British flicks of the 1950's and early '60's--Look Back in Anger, Room at the Top, The Loneliness of the Long Distance Runner, The Entertainer, Saturday Night and Sunday Morning, A Taste of Honey,The Servant--Tom Jones was a free-for-all in which nearly all the characters seemed to be caricatures of themselves, except, perhaps, for Tom Jones himself, whose good humor, optimistic flair, common kindness and sporting randiness were immediately appealing.
Contrasted against Jones/Finney, and brilliantly played, is David Warner's Blifil, the presumed legitimate son of Squire Allworthy. Warner, a seasoned character actor I've appreciated in dozens of roles, including those in The French Lieutenant's Woman, and Titanic, as well as in bit parts of dozens of lesser productions, is the pimply, conniving, sinister architect of Jones's near hanging, who makes your skin crawl with his sneering condescension. I find Susannah York's bland version of Sophie to be rather a disappointment, though she handles the comic scenes well enough. The really juicy secondary parts belong to Hugh Griffith, Allworthy's braying bumpkin neighbor ("more than Gothic ignorance!") who rolls with equal relish among his hogs or his milk-maids; and Dame Edith Evans, nearly translucent with frail age, lunging about uttering pompous pronouncements about nearly everything. 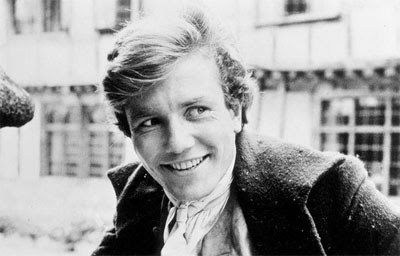 Henry Fielding's narrative was an early example of the novel genre, structured as a series of episodes or installments (18 "books" in all), and the omniscient narrative overview tended to objectify the action and distance the reader from the story. In the movie, this narrative position is recreated in the movie as a formal, pontifical voice-over which comments with amused irony and feigned moral disdain on the unfolding plot. 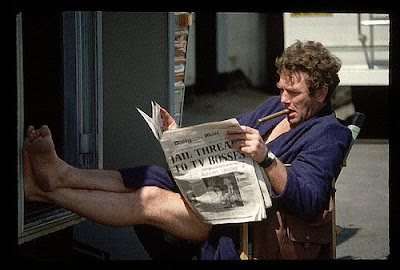 Albert Finney in an informal moment
As Jones, newcomer Albert Finney was the perfect choice--his beaming, cherubic good looks the ideal expression of Jones's virtuous nature, though susceptible to enticements, always ready for an uninhibited bit of brawl, or a quick roll in the hay. His performance was crucial to the success of the film, and he carries it; almost anyone else would have come off as foppish or just vicariously crass. 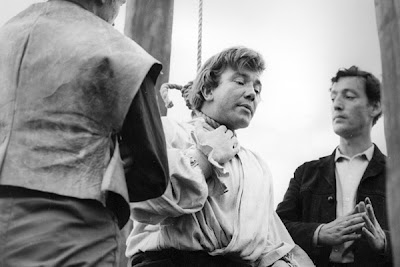 Hollywood (and Britain's) treatment of period "costume dramas" had been staid and ponderous, for the most part, but swashbuckling adventure films, like Errol Flynn's Robin Hood [1938], or Burt Lancaster's The Crimson Pirate [1952], turned the picaresque genre into matinee cartoons, and treated the historical content as a playground for juvenile tomfoolery. Such fare took complete liberties with verisimilitude and historical accuracy. But sex had never been allowed to rear its ugly head. In Tom Jones, the playboy prototype finally arrived on the screen. Diane Cilento's Molly Seagrim (and Joan Greenwood's Lady Bellaston, and Rosalind Knight's Mrs. Fitzpatrick) are all deliciously aggressive in their pursuit of Jones, and the sheer lack of inhibition belies the "proper" air against which the modern puritanical movie code is played. Jones is a sensualist by nature, and his almost divine incorruptibility which he wears like a halo, is bound to see him through the nastiest scrapes. We rout for him, because we come to feel his joy and excitement at living life with an almost unbridled relish.
The film's use of slapstick--speeded up sequences, the actors addressing amusing asides directly into the camera, the raw bawdiness of country life, lovers caught in compromising positions, mishaps and pratfalls, the masked ball at Vauxhall Gardens ("to see and to be seen, in heaps they come, to do and to be undone")--is broadly indulged. Plotting and intrigue, skullduggery and happy accident, each play a part. And all this is put before us in the spirit of fun, without malice or gloating.
Tom Jones paved the way for other historical dramas--Barry Lyndon [1975], for instance, or Rob Roy [1995], or The Legend of Zorro [2005], the BBC miniseries I, Claudius [1976], and Gladiator [2000]--by showing how a central character of mixed morals or conflicting allegiances, with an indulgent nature, could appeal across the spectrum of movie audiences.
_____________
Note: My previous post of December 16, 2009.
Posted by Curtis Faville at 6:06 PM

'Ee looked like a bloody focking pooofter to me, mate. The TJ flick was amusing at times, but...British, all too British.

Now, Barry Lyndon--beauty that was--at least visually. tho' dragged on a bit (and the musak too not bad...if a bit sentimental). Rob Roy pretty cool-Liam's no poofter--Timmy Roth did a good Tory villain--and duel at end quite bodacious.