Last night, lying in bed before going to sleep, I was watching television, when I heard what I thought must be a joke: NBC was announcing the premier of a new show called Breakthrough with Tony Robbins [Tuesday at 8 PM]. I suppose technically it's possible that not all the network affiliates will air this program--I don't know what kinds of contracts these old "local" franchises have these days in the tough market of commercial television--but if it can be adopted by a Bay Area station, you know it's a signal of a big change in the culture of television programming.
Anyone who's watched any television in the last 20 years must have seen Tony Robbins, whose info-mercial spots and plugs have been turning up with regularity on commercial stations.
The popular inspirational guru is not a new phenomenon is America. Amateur popular teachers, preachers and educators have been plying their shady trade for at least a couple of centuries on this continent, though with perhaps more success than elsewhere. In India, where the guru business seems endemic to Hindi life, gurus are accepted as a natural expression of the native culture, though the success of mystical Asian gurus in America has been limited somewhat by their exotic looks and approach.
If you want to sell something, the best way to do it is to advertise. In religious and "inspirational" contexts, you're basically selling yourself. Disseminating literature and advocating product use are enhanced by putting a face, a personality, behind a promotional campaign. The salesman prototype has never been much favored in America, but Americans' credulity and essential good nature can often be seduced. Our trademark puritanical suspicion and belief in the possibility of good works may be manipulated by someone or organization which wants us to suspend our skepticism and embrace an inspirational program, either as a participant in a group, or through some self-help package. 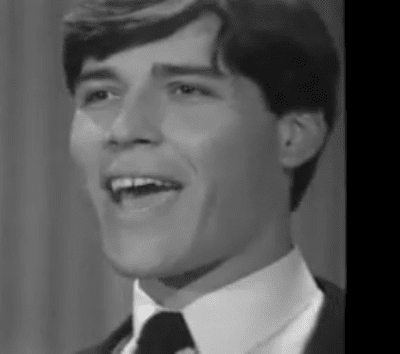 Tony Robbins has been in the inspirational self-help business all his adult life. He worked with/for other inspirational "teachers" before starting out on his own to build a following, and expand his business empire. Adopting the techniques pioneered, for instance, by Billy Graham (a Baptist inspirational preacher, 1918-, who was a familiar figure among certain people in the neighborhood where I grew up during he 1950's), he naturally turned to regional and national media outlets to get his message out.
The breakdown of national media channels which took place when Cable began to expand, opened the door to a rapid growth of commercial exploitation of the television media. This has affected not just Cable stations, but commercial stations as well, which have come under increasing pricing pressure, causing them to turn--probably against their mission and professed preference--to infomercials and questionable advertising revenue sources to fill their programming schedules. An infomercial can be especially attractive to an affiliate, since the production costs are negligible (most infomercials are produced by the source) and the ad revenue is efficiently furnished in a single lump sum. 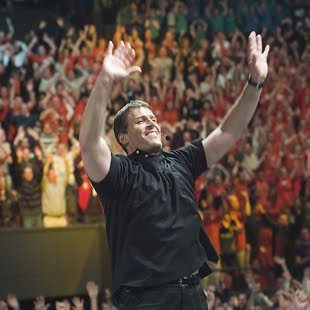 Not only have local network affiliates (the Big 4, NBC/CBS/ABC/FOX) begun to schedule informercial content, even the local Public Stations have been relying on them in the last decade as well. But these programming concessions have mostly been restricted to non-prime time, and were usually somewhat limited in scope. Though some Sunday morning evangelism was evident, for the most part the infomercials on the regional/local affiliates were product oriented (i.e., selling something people could buy or order offline).
But it now appears that the Big 4 affiliates have capitulated, with the arrival of Tony Robbins to prime-time on one of the major networks.
Robbins is an old-fashioned con man in the new clothing of New Age marketing. The first time I noticed him--on a Cable station while staying in a motel some years ago--he strode onto a stage to screaming minions, dressed in what appeared to be a high-powered lawyer's outfit, with a snowy white billowing dress-shirt, dark tie, loosely-fitting dark blue slacks, and big striped suspenders. The suspenders, it appeared, were signature accouterments. Tony Robbins is a really big fellow; six feet seven inches tall. He smiles a lot, and bounces around like a holy roller preacher, waving his arms and yelling encouragement to his followers.
I'm unfamiliar with the finer points of Robbins's program of self-empowerment and liberation, but it has a familiar ring: A combination of psycho-babble, fake religious inspiration, and pragmatic advice, it appeals to people of little imagination who may, at one point or another in their lives, feel they're adrift and need a handy formula for personal salvation, or simply need to feel a part of something larger than themselves.
These needs traditionally have been the breeding ground for religious proselytization, but the inspirational personal empowerment movement has seized upon the conversion techniques once restricted to religious conversion, and have figured out how to fashion them for secular use.
I must say, I find Robbins's appearance on prime-time to be a disturbing development. If this is the best that NBC can offer its national affiliates on Tuesday evenings, the general level of quality entertainment on television has reached a new low.
But heck, what do I know? Sally Field--who has won two Oscars for her movie acting--got her big break start in The Flying Nun [1967-1970]. I can still remember how dreadful we felt whenever the Awake and Watchtower solicitors came around, as they canvassed the neighborhood, going door to door. They would stand on your porch and ask you through the screen-door, questions like "What do you think happens when people die? Where do they go?"
We can laugh about that now. That was in the old days, before infomercials and slick media promotional gurus. We used to be able to keep them out of the house, restricted to the front porch. Now they've gotten into our living-rooms. But all you have to do, to get rid of them, is press the clicker, and they disappear (poof!).
Posted by Curtis Faville at 7:21 AM

I couldn't agree with you more.

Greetings Curtis,
Sorry my new blogging friend but I cannot agree with your overall opinion of Mr. Robbins and his part in our television landscape. Granted I don't watch a whole lot of TV anymore for lack of good programming. I would have to say that I think it refreshing to see stories of people overcoming personal struggles and odds to better themselves. Personally I will take an inspirational story anytime over all the CSI solve a murder shows that have virtually taken over our network programming. Beyond the channels of PBS, Discovery, History Channel... ECT. There just is not enough quality out there to see. So, I say bring it on Mr. Robbins!

There are two separate issues to address here.

In the first instance, I am of the opinion that the trivial kinds of "inspiration" or "help" that such media figures actual perform for their followers is certainly open to dispute. They don't pretend to offer professional psychiatric or medical advice, and they are usually quite careful to limit their liability (and their "product"t) to commodities that carry no actionable claims. In other words, such individuals are a modern version of the "snake-oil" salesman. Doctor Phil, who offers professional behavioral counseling before live (and media) audiences, is simply a kind of entertainment, like Oprah or David Letterman.

In the second instance, national network producers have had to work with smaller and smaller budgets, as the proliferation of Cable stations has steadily eaten into their market share(s). De-facto infomercials--of which Robbins is another (albeit high profile) example--offer low-cost programming (since they usually produce their own shows) for a simple fee. The last 40 years of television programming has seen a steady erosion of quality in terms of all areas of production value. The grudging capitulation of prime-time media to "inspirational" quasi-religious or personal empowerment programming is a sad commentary on the state of our national media. The media news network organizations were the first to go. Now we're seeing pure entertainment being pushed aside in favor of ga-ga reality and counseling and inspirational promotion.

If you think Tony Robbins is entertaining, you're certainly entitled to your opinion. There are probably too many cop shows on TV, but there always were. Formula cop shows are probably among the few remaining productions that advertisers will buy. Their preferences are usually based on market surveys. We vote with our clickers.

If you like Robbins, then by all means watch him. I certainly won't.

Hi Curtis,
I find it interesting that you have somewhat created a blog within a blog in your comments (very nice). Now, I agree partly with what you say; "whether televangelists or New Age gurus serve any useful purpose" The question in it's own right is really a subjective one. I suppose they serve a purpose to the people who wish to see them for help of some type. Now, where I do disagree is whether or not Mr. Robbins falls into this classification. In my opinion I would say No. Mr Robbins does not seek to help individuals under the guise of religion. What he does try to do is for people is to get them to more fully understand how their own behaviors, mindsets can be fine tuned to create a more meaningful life for them. Now I realize that my thoughts on Mr. Robbins work was very general and simplified to say the least. As you mentioned in your earlier post he has been doing this for almost 30 years and worked with countless heads of state and people that can afford him. People go to him because what he teaches works. If it did not than he would have fallen off the radar a long time ago. Now, I know that you will not watch him and that's fine. I just don't think that he needs to be lumped in with other "New Age Gurus."

By the way, if you lived in the year 34 AD. A man by the name of Jesus Christ would be considered a "New Age Guru" by fellow Jewish leaders of their day.

But then, does Oprah, or 95% of TeeVeeland serve any purpose? To sell beer (autos), perhaps.

Evangelists are the primary zombies of the world (tho' one might say...allies with Zion...)

i've watched my brother for over 30 years try to reprogram his mind by listening to and watching these con men.He is still working harder than ever and he is still not very successful.Tony Robbins,Les Brown,Oprah Winfrey and the list goes on.We have made all of them tremendously wealthy by allowing them to tell us that our lives suck.If you are of sound mind and body and you do not have a learning disability you can achieve great success.I shouldn't,but i feel sorry for all those women....and men who hang on every word that comes out of the mouth of people like Oprah Winfrey and Tony Robbins.I am very happy with my life.I have friends who don't believe i never went to college.I can build and fix any computer.I've changed engines in my cars,remodeled homes etc. I did these things out of interest,desire,necessity and above all common sense.I am no more gifted than anyone reading this.I just never bought into the Oprah Winfrey or Tony Robbins hype....and i'll be damned if i'll pay anyone to tell me what's wrong with my life.