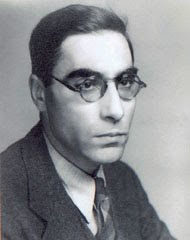 Louis Zukofsky's early published work remains, for me, a guidepost to what Modernism means. The usual models held up as examples--Eliot's The Waste Land and Prufrock, Joyce's Portrait and Ulysses, Pound's Cathay and the early Cantos, Stein's Tender Buttons, Hemingway's In Our Time, Yeats's Tower, Woolf's Mrs. Dalloway, Kafka, Musil, H.D., Stevens and so forth--don't capture an essential element of abbreviation, of ellipsis, of the power to suggest and imply and objectify through image and metaphor with the same efficiency that Zukofsky and Oppen and Rakosi and Reznikoff and Williams discovered, separately or severally, in their early work, during the period 1915-1940. That they should, through accident and circumstance, have come to be associated as members of the Objectivist Movement, strikes me as coincidental rather than the result of some social fact of their association. Each was working in relative obscurity--I say relative, because they were obviously, to some degree, aware of influences (some mutual), as well as of each other. But in a true sense, each came by his style independently, not through some imitation of a popular style (or of each other). The poems appearing in the first section of LZ's All: The Collected Short Poems (Norton, 1971) were not collected until 1941, when James A. Decker brought out (the now quite rare) 55 Poems.
Here are collected the precious examples of the early, concise, edgy lyrics upon which LZ's career would be founded. Following the long, parodic Poem Beginning "The" are 28 poems which define, for me, the instigations (a word fond to Pound) to a new vision of the world, one consistent with early Modernism in painting and sculpture, architecture and design, music and the dance. Whenever I've grown tired and despair of poetry, or of everyday life, I turn again to these early experimental pieces for inspiration and delight and renewal.
Not much more than being,
Thoughts of isolate, beautiful
being at evening, to expect
at a river-front:
A shaft dims
With a turning wheel;
Men work on a jetty
By a broken wagon;
Leopard, glowing-spotted,
The summer river--
Under: The dragon:
There is no doubt that a good deal has been said about this poem by now; but when I first read it in the late 1960's, that wouldn't have been true. Then, few in the literary--not to speak of the academic--community, were even aware of it at all; which is, I suppose, a measure of the distance that taste and official sanction has traveled in the last 40 years. I can still recall how fresh and uninhibited these lines seemed to me when I first read them. The use of colons, especially the concluding one (!); the skill to imply, covertly, through the recitation of specific, separate, details; the lack of an explanatory framework connecting the dots; the casual, seemingly relaxed mood initiated with the first stanza, the under-stated not much more than being, which sets an atmosphere of warmth, of flickering (smoldering?) lights in the Summer night evoking a dragon (!)--the whole river's body become a sort of leopard or alligator, spotted, striped, alive. The unexpectedness, vividness, indelible surprise and intensity of the concluding image--made anti-climactic by the colon, followed by...nothing. A poem begun in vagueness, extended in visual and material specificity, then transformed with the utmost simplicity and economy of means--all this in such a short poem. Since this lyric is followed in exact order directly by the poem quoted below, I suppose an argument might be made defending LZ's intention to have these poems linked in sequence. Both might be considered incremental impressions of a Summer evening.
Coctails
and signs of
"ads"
flashing,
light's waterfalls,
Bacchae
among electric lights
will swarm the crowds
streamers of the lighted
skyscrapers
nor tripping
over underbrush
but upon pavement
and not with thyrsus
shall they prick
the body of their loves
but waist to waist
laugh out in gyre--
announced then upon stairs,
not upon hills,
will be their flight
when passed turnstiles,
having dropped
coins
they've sprinted up
where on the air (elevated)
waves flash--and out--
leap
signaling--lights below
This is urban poetry, and the poet pokes fun at classical tropes: Bacchae--female Dionysian followers walking on pavement, not through underbrush, among neon ads for cocktails, not pricking their dates with magic wands but dancing waist to waist, laughing on the stairs (and not on hills). Streamers from skyscrapers! Lights like waterfalls! Stoplights in sequence signaling in waves tens of stories below! This is as good as Gershwyn! Think of O'Keeffe's vision of New York skyscrapers-- 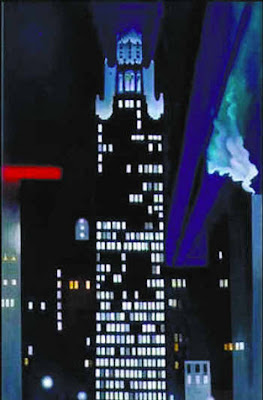 This delicately ironic bacchanalian lyric of the modern city may seem half-serious, but it's so much more up-to-date than anything being written at the time (early- or mid-20's) about American city life. That dragon, those Flappers, all that electricity and commerce (the river)--all that artificial light and streamers and highrise skyscrapers. How shall the tropes of ancient Greek poetry be reinterpreted--re-ignited--twenty centuries later?
For me, it isn't J. Alfred Prufrock or Peter Quince or Stephen Dedalus who personify the effects and atmosphere of the modern world, but the direct representations of the Objectivists--the insistence upon materiality, the incorporation of contemporary language, concision and density, a lack of "filler" or redundant connectedness--no formal decorativeness.
The sincerity which was so dear to the Objectivists has to do, in my view, with an investiture in emotion (sentiment) that bears some literal connection to real situations and real people, instead of mythical, ideal or imaginary ones; in economic and material realities of the present, instead of those borrowed from mythology or legend or folklore, or from idealized versions of character or society. But it isn't just the acknowledgment of these things, that matters, but how they are seen. There is an energy transfer from phenomena, an eccentric design in space, which no ready-made traditional artificial formal pattern can describe. Thus, art must respond to this eccentricity or uniqueness of the world, in its particulars, in a way that respects its structure and formula, rather than imposing a posterior order upon it. In this respect, it is empirical, building from specific to general, rather than top down, deductively, forcing subject matter to conform to pre-conceived principles of order.
For me, Zukofsky's All: the collected short poems 1923-1964 is a textbook of examples, the obvious work of a genius, and a feast for the mind. LZ could have written in any time, under any cultural paradigm.
Posted by Curtis Faville at 9:47 AM

Does Paul know you're quoting his dad? Hope you sent him a hefty check.

put out an edition

which is when I first read any "Zukofsky" about 2000 AFTEr I was absent from The Poetry Scene for nigh-on-to 37 years.

Did I MISS much?


this book was/is copyright by Paul

Bob Creeley's forward is a BONUS...

many "neat" poets/musicians came her way as she not only majored in music but also in English Lit.

where she played with him and as part of an orchestra event...

Pablo Casals also did a work-shop there. He chased her around a piano and shouting "KISS ME!"

Paul, she says, was a good (violin) player.

as with us "poets" I suppose the only way to protect our sanity is to go a bit NUTS!

after all
what if
suddenly
you discovered that
I was the sane one?
&
when you do/ if you do
will you read my stuff ...after I'm dead?

I guess the net and this
ubiquitous Internet/Computer CRAP

has given every piss-ant
"student-of Poetry 'clubbie' working on their 3 rd PEE ACHE DEE
a license to steal, copy,
and pretend to be intelligent and all understanding/knowing...

No wonder the Kulchur is going down the toilet

when I WAS 12 I was reading comic books

or maybe a Classic Comic Book or 30

(we sold them in the grocery store 10 cents 15 cents a copy. I remember reading

and, when I wasn' reading these classic comic books

Really a few fragmented poetic images, however cleverly arranged, hardly compare to JJ's Ulysses--even one of the thick, political chapters, say Cyclops, wherein one realizes the book's as much about uh say the tragedy of the "Reformation"--and Cromwell's thugs (ie protestants...and their allies) as it is about the old myth..with boo-coo Dantean motifs. Alas the freudians and soi-disant marxists got a hold of the book, sometime in the 30s... . and, bless Osiris, Joyce wrote before the confessionalists (including beatskis) ascended the throne

Obviously, I'm not saying Louis Zukofsky is a greater writer than Joyce, or Yeats, or Eliot--though one could make such an argument.

What I am suggesting is that the character of Modernity is more clearly and explicitly in evidence in the work of LZ than in the other examples cited. When you ask yourself in what sense, precisely, Joyce is modern, it becomes much more intricate a problem than you might at first imagine.

"This is as good as Gershwyn!"


For those who think Goishwyn's good, perhaps. Really somewhat simple.

Also bio material suggests Zukofsky was a ...socialist, even marxist for some time. much of the urban material probably ironic or critical. Skyscraper symbolize the Oppression of finance capital, F-ville, for marxists. At least until they get tenure, or inherit their papa's shekels

All true. Read the next installment.