The Early Poems of Mark Strand

Mark Strand [1934- ] has had what by now has become a long and distinguished career as an American poet; but I wouldn't have picked him for that role early in his history. I first encountered his work in Paul Carroll's ambitious (but slightly amateurish) introductory anthology The Young American Poets [Chicago: Follett Publishing Company, 1968]. Strand looked slightly out of place there, his Author photo showing him decked out in tasteful tweeds, his classic, gaunt, Lincoln-esque visage sharply contrasted with the mostly laid-back, counter-culture kids who made up the majority of Carroll's gang. Aside from Kenward Elmslie, Strand was the oldest member of the group. 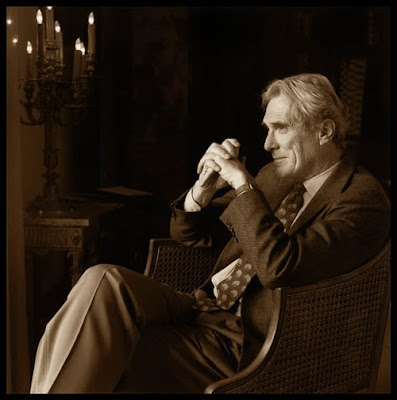 Strand originally wanted to be a painter, which may account for his belated entry into the literary sweepstakes. He studied with Josef Albers, taking an art degree in 1959. Then, he turned away from the plastic arts and took up literature. Following attendance at the Iowa Workshop [MFA, 1963], he traveled to Brazil on a Fulbright. K.K. Merker [Stone Wall Press] published his first collection of poems, Sleeping With One Eye Open, in 1964. Then, in 1968, Atheneum published his first trade book, Reasons for Moving. Reasons for Moving was a tightly-controlled sequence of spare lyrics, by turns amusing and grave, which bore the influence of Borges and Alberti, among others--influences which were atypical at the time. Borges, for instance, was just beginning to be appreciated by American readers, with translations of a number of his works appearing to much acclaim on both sides of the Atlantic.
Strand's inspiration has always tended towards the macabre, the elegaic, and the ironic. He has never been interested in language as such, except perhaps in his very earliest experiments in rhyme (as see the title poem of his first book) and simple alliteration; his poems are often like very tightly controlled prose poems, or even short stories in which the action is expressed in purely poetic terms. His poems invariably revolve around specific--and frequently surreal--situations, and the effect of his technique was often reminiscent of ghost stories, or scary children's fiction.
What to Think Of
Think of the jungle,
the green steam rising.
It is yours.
You are the prince of Paraguay.
Your minions kneel
Deep in the shade of giant leaves
While you drive by
Benevolent as gold.
They kiss the air
That moments before
Swept over your skin,
And rise only after you've passed.
Think of yourself, almost a god,
Your hair on fire,
The bellows of your heart pumping.
Think of the bats
Rushing out of their caves
Like a dark wind to greet you;
Of the vast nocturnal cities
Of lightning bugs
Floating down
From Minas Gerais;
Of the coral snakes;
Of the crimson birds
With emerald beaks;
Of the tons and tons of morpho butterflies
Filling the air
like the cold confetti of paradise.
______
Minas Gerais is a State of Brazil, not quite contiguous with the nation of Paraguay, known, among other things, for its caves.
Morphos are the beautiful shimmering metallic blue butterflies of South America, as pictured below. 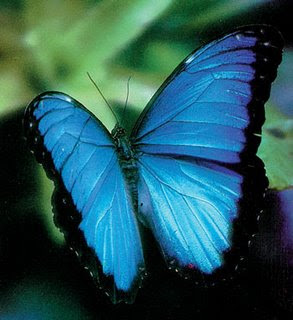 But as far as the Strand-product goes ...strictleee commercial (to paraphrase an authentic Ahhtiste, Frank Zappa)

My Google ID doesn't work so I can't comment on Kirby's obsession with Bachofen, but his description of it reminds me of some of the distinctions made in the work of Walter Ong on the basis of orality and literacy or what Ong was apt to call mamaspeak and papaspeak. Strand seems to have the gist of it down pretty well with the added benefit of compression and lyricism.

Actually...a few lines of Strand's writings (here, and elsewhere online) seem to approach something like...poetry--or he creates pleasant images anyway, tho' he doesn't seem to have the intensity of a Borges or Neruda, etc.

StrandSpeak outdoes the typical Silliman free association and/or "that time of the month"
school at any rate, including the odd semi-psychotic rants of Ashburied.

In my opinion, Ashbery's work has been on a downward spiral ever since Houseboat Days. That book was the turning point, for me. I haven't read a single poem, since then, that I thought merited a second reading, and the poems in his latest book seem utterly without meaning or style. Why should we regard as shocking the fact that a major American poet should simply run out of inspiration, or literally be at sea with respect to what to do next?

I'm neither saddened nor elated with this fact. For younger writers, who, noting his reputation, go to his recent books for inspiration and/or confirmation, I'm disappointed to think that they see this work as an example of something worth emulating. What could a teacher claim for it?

Strand's a phony, there is no genuine surrealism among US types, I wrote a book on Lamantia, but it was half about surrealism as a whole, and speculated briefly about why it never caught on in the North (too frozen