Walker Evans - A Whole World in a Frame 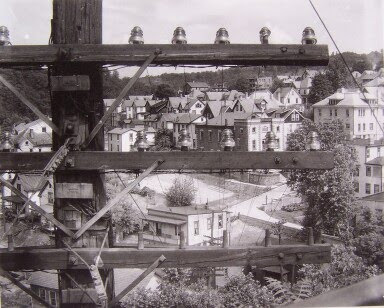 There is no way to do any justice to the work Walker Evans [1903-1975] in a single blog entry. In fact, you could talk for an hour on any of several of his best images--his work has depths and echoes and subtle corners that you can follow down into circuitous passageways of speculation and meditation.
Here's one--Morgantown, West Virginia, 1935--that seems to contain so much information it overwhelms the visual imagination. What's immediately apparent in almost every Walker Evans photograph, is the undeniable, indelible imprint of the American landscape, crisp and immediate, as exact as a sliced microscopic specimen slide, cut to reveal a familiar cross-section of a world that comes down to us perfectly embalmed, the shock of recognition hanging in the air like flash-powder.
In a prose poem I wrote about a Civil War photograph in the 1970's, I said this--
He is haunted by the irretrievability of this instant, instance, captured in such novel detail it appears to reveal more than it should, or rather promises to vouchsafe, or to discover, some clue that will lead in an unbroken line of descent to this moment of his existence, and so render a meaning, however oblique, to the act of his looking. 1
Looking at a Walker Evans photograph from the 1930's, one feels an overwhelming, a haunting presence, of the Depression years. Evans's images always have a dated feel, it's like a charge-tag on a fetish object, saying (in effect) "the price we paid for the picturesque decay that capitalism and mindless settlement brought can never be refunded"--not in their lifetimes, or in yours. Despite the cleansing prosperity of the post-War years, the memory of rural disintegration, the degradation of the industrial belt culture, we can't erase the sacrifice of a whole generation to the tin gods of Mammon. As the Dionysian 'Twenties passed into tawdry memory, the guilt and regret of the 'Thirties broke the back of the American conscience, filling us with awed stupefaction. Evans's images are like mug-shots of a whole era of dazed shell-shock, the aftermath of the class war laid bare like the rubble of a bombed city.
Here, the superimposition of a utility pole with cross supports, and mounted insulating glass heads, creates a grid through which a hillside residential community is seen in a panoramic spread. The angle of the shot suggests that the the bird's-eye-view was made from a high point across a ravine or another hill opposite. The structure of the horizontal timbers sets up a layering of space, of a distribution of the visual field that's like a metaphor for the electric/telephone line grid of which the utility pole is one distribution node. The power of the power grid, of big utility control linking up all the separate entities into a single exploitation net. The subversive power of the picture, to summon in one graphic snapshot all the implication of regimentation and organized system.
But an Evans photograph rarely looks staged. There's also a kind of blankness. No one designing the placement of utility poles would ever imagine the purposes to which a structure like this might be put. Utility poles are like the semiotic for service, the literal arm of capital tracking usage--the life-line of the rate-schedule. Contrarily, one might impute the symbolic significance of the line-pole as linking or consolidating the community, though its dominant fore-grounded position suggests otherwise.
Like most Evans prints, this one is full scale, from the deep black of the shadow on the under side of the cross-bar, to the white siding of the building a little bit to the right--but its glory is in the sensual range of grey tones distributed across the whole frame, suggesting a full panoply of colors, without having to balance them through the bias of the color spectrum. Evans is among those photographers for whom the black & white medium seems to have been created, whose imagination, aesthetic vision, and subject matter are all of a piece. Despite the amazing quality of his images, Evans didn't place much emphasis on darkroom work, and relegated this drudgery to others. What this tells us about "print quality" or the "negative as score" is unclear. The whole tendency of the critical thinking about photography over the last fifty years has been to honor the entire process, from choice of lens, through the mounted print, even to decisive sequencing and display.
Evans may have thought of himself primarily as a documentarian, building up evidence of social fact and condition, for use in publication in periodicals or books [Now Let Us Praise Famous Men, Boston: Houghton Mifflin, 1941], but gradually, recognition of his innate ability to prevision deeper levels of meaning and implication has resulted in his elevation to the highest ranks of 20th Century artists.
__________
1  from "Landscape" in Wittgenstein's Door, by Curtis Faville [Berkeley: Tuumba Press, 1980].
Posted by Curtis Faville at 11:48 AM