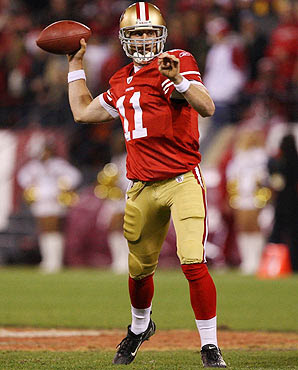 It's difficult to define what makes a winning combination of skills and traits in a successful NFL quarterback. It's not about intelligence, certainly, and not about raw physical talent. Luck may be involved, especially in the early part of a career, when a slow start may relegate a highly rated college prospect to the bench. Great quarterbacks may flower in their third year, or in their 8th--there's no scenario that holds true for every individual.
A few observations may narrow the parameter: Successful QB's in the NFL had better not be short in comparison to their fellows, since the difficulty of looking over tall NFL lineman precludes ordinary visual access to the patterns of weaving receivers and defensive backs down field; a short man will have extreme difficulty overcoming this.
An ability to "read" defenses, and to intuit the movements and tendencies of your receivers and backs, is also crucial. Preparation and focus are important, since most of the decisions a QB makes once the ball is snapped must either be memorized and automatic, or be made instantaneously, almost without thinking.
Finally, there are two indefinable qualities which winning QB's possess. The first is a determination to overcome odds, to press forward against adversity and repeated failure. The second is a coolness or control under pressure. Neither of these two key elements can really be learned. Courage, and the ability to block out distraction and stress, are probably a genetic inheritance. Joe Montana had them. When the game was on the line, a level, concentrated, dark mood came over him. He was able to put on mental blinders, and devote 100% of his attention on the problem at hand, picking spots and improvising serially, down by down, to maximize the potential yardage in each situation as the end of the game wound down in a sequence of increasing risk.
After having watched Alex Smith over five seasons (he was out for the whole of 2008 with injury), I've come to the conclusion that Smith doesn't possess these crucial qualities as an NFL QB. I previously said on this blog that he isn't the answer to the 49ers' Quarterback Problem, that he would never bring the team to contention. But I would go further now, after watching him in the first game of 2010 against the Seattle Seahawks (which the 49ers lost 31-6). I don't think the 49ers can reasonably expect to win any game in which he's the starter this year. Next week, the Niners take on the champion New Orleans Saints.
I can still recall seeing, in person, the 49ers crush the Saints under Steve Young a few years back, 38-0 in the New Orleans Superdome. In those days, the feckless Saints, under Mike Ditka, could hardly make a first down, much less a touchdown. But that was a long time ago.
Now, these teams are so unevenly matched, it's hardly a contest. I would bet a spread of 14 points in favor of the Saints; yet they might win 56-0!
In the NFL, the importance of talent at the quarterback position can't be overemphasized. It accounts for 85% of a team's success. It's safe to assume that in the NFL, even the poorest teams have the best talent available. But a bad quarterback can make a whole team underperform, dragging it down hopelessly into mediocrity. This is what has happened each time the 49ers have gone with Smith. He's tall, he's very intelligent, he works hard, he shows courage in the pocket, but he doesn't possess the determination and coolness under pressure that are the pre-requisites for ultimate success over odds.
I've said it before, and I'll say it again. Smith isn't the answer. The 2010 season will be a bust. Until we can find a decent replacement for Smith, the Niners will not be competitive, either in their division, or in the league as a whole. The man has to go.
Posted by Curtis Faville at 4:57 PM

Professional sports is a mildly diverting pastime. Few would make claims for its any greater significance. It's part of our culture, just as gladiators were in Rome, and the "football" matches were to Mayan civilization.

That doesn't make ours less compelling, or less competitive (because of the money and glitz). Contemporary sport is undoubtedly the most impressive show of human contention in history (outside of war--and we do that too), no question. High school, college, professional, amateur--we live in the golden age of all sport. And yet over half our population doesn't exercise, is overweight, and eats junk food. Go figure.

Ah what did Gibbon say about that? When the plebes are obsessed with sport, porn, crazes --the empires at risk or something to that effect. Even TS Eliot's cousin Charlie, Prez of Haw-vahhd for some time (and a mechanical engineer or something) opposed the introduction of Ball (foot, base, bassket...) right next to the hallowed halls of hackademia. And why bother with Eliot, and/or integrals, or real sport (like...chess! or motocross, or even tennis) when with a few steroids a week, and pumpin' iron like a mutha-f-er you can get on the team, and be the next Bill Romanowski, or close, or failing that, join the athletic dept./coach mafia. We're surrounded by Romanoskis, when we need Bobby Fischers

I think Marcus Tuiasasopo is still working in the weight room up in Seattle for the Huskies. I don't think he ever got a fair shot with the Raiders. He's still young enough to have an NFL career. Last downs he played were about two years ago for the Jets in a pre-season game against the Bengals. He got to play two series of downs early in the fourth quarter. On one series they made three first downs before losing the ball on a fumble. The other series they scored on a touchdown pass in six plays. The "starters" scored zero points and their total offense was less than what the former Rose Bowl MVP gained on a thirty yard scramble.