Confidence & Oversight - The Money Go Round 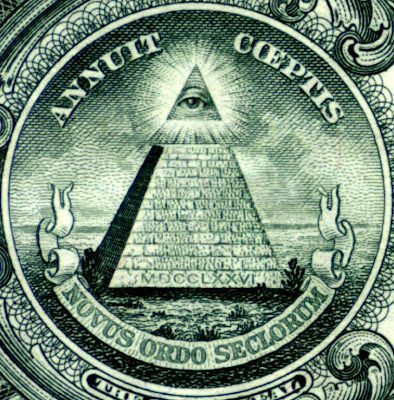 Money is funny stuff. But I'm not thinking in comic terms at the moment. I'm pondering the "All-seeing-Eye" motif on our American one dollar bill. Money is a symbol of something, a convenience for barter or trade. Where there may be no easy swap possible among traders, an interpolation is facilitated by this metal or paper object which we "agree" holds a certain assumed value. What we put on these objects (money) is an expression of our faith in the power of contracts and obligations. But the Eye of Providence, as it's called, is something more.
The Founding Fathers (I guess the Mothers got left out) appointed a design committee to suggest alternative bill designs. The words Annuit Coeptis means "he approves of our undertaking" and Novus Ordo Seclorum means "new order of the ages." It was thought that the birth of the United States, denoted by the 13 steps on the pyramid (for the 13 original Colonies), and the date 1776 in Roman numerals, would be looked on favorably by the god head. The "seeing eye" has roots in both Western and Eastern religious iconography.
It's always struck me as odd that the eye--our binocular, highly adapted 20-20 vision--which of all our senses is the most impressive, most useful, most developed, and least subject to distortion or misinterpretation, should have been thought the instrument of super-rational omniscience. If human beings can't trust their eyes, then what can they trust? The eye is our supreme empirical device, which when combined with our intelligence, has enabled us to walk "out of the jungle" and into a synthetic world largely of our own making.
The Founding Fathers clearly believed, or understood, that their experiment in general enfranchisement and theoretical freedom was a watershed moment in the history of mankind. They believed that it was a unique event, a fulfillment of the aspirations of man since the beginning of recorded history. They saw the Enlightenment, and the advance of knowledge and science, as handmaidens to the liberation of peoples from the domination of ignorance, superstition, and unjust bondage. The combination of a free market, a basic tolerance towards expression and religious pluralism were the hallmarks of a new kind of political coordination designed to free men's energies and talents, towards a prosperity and variety of life. The symbolic representation of their optimistic confidence is right there on the one dollar bill to see and read.
But the "agreement" which money symbolizes is a fragile compact. We all agree that our money represents a stable value which is the foundation of our confidence, our "faith in the full credit" worthiness of our nation. But as we fall deeper and deeper into real debt, that confidence gets tested. As we spend and spend to "save the world" or to "entitle" ourselves to better health care, we push harder and harder against the natural limits of credulity. Does anyone still believe that America can "afford" the debt it's piling up? Short of ruinous inflation, is there anyway our growing debt can be paid, as our national product--our real productive engine--continues to decay?
Posted by Curtis Faville at 8:03 AM

that "eye" is (also) The Masonic Eye

to which fraternal order of the elite ruling class belonged and, most likely, still do...

things deteriorated very rapidly after we went off of the gold standard... it now costs approximately 6 cents to make one (copper) penny...maybe more
as one pound of scrap copper is selling today for about $3.64 so? save your pennies take them to a metals' scrap yard and GET RICH!

our National Product has always been GREED....

any thoughts on the money and Masonic "seeing eye" connection?
I think the dollar bill's probably better understood as a type of fetishism to which an unregulated capitalism is always subject.

But are financial dealings really unregulated in the States? Obama's 700 billion dollar bailout of Wall Street:—a type of state socialism? Is the all-seeing eye going blind?

Apart from the monetary issue (see Karlo Marx's Capital for some hints...currency/money while convenient is an abstraction for the benefit of owners/capitalists, in brief), the history of the freemasons in America is an interesting tale.

Most of the Founders associated with Masons, Washington being the most prominent. Most in Consumerland might think the freemasons and secret societies, shriners, are a thing of the past, but they ain't. Most cities have masonic halls, where many yokel businessmen of all types gather. A large statue of one Albert Pike rests a few blocks from the White House. Bush I took his presidential oath on Washington's masonic bible.

and
of course there is that Yale secret society that both Bushes belonged to still do (which, I betcha they were also Masons)

what was it? The Skull and Bones?

heck just read some of it s members WASPS every-one down to their fucking stingers!

Yes, mostly WASPs, especially in the dirty south. Andrew Jackson was a big masonic pedazo de mierda. But not...always. Jewish masons are not unknown, and there are some blacks. Count Basie was a mason. Depends on the rite, and lodge. Some lodges were not as bad or sinister as others. Ben Franklin's lodge was not that of Andy Jackson or the klansmen (many of whom came from lodges).

Big Oil and all the other "BIGS" are just 'piss-ants' compared to who is "driving the bus"..

I have always thought that that highly psychedelic image of the eye atop the pyramid was rather cruelly ironic, since the acquisition of money generally entails doing something unpleasant to other people or having to subject oneself to something very unpleasant. In other words, an activity that is the obverse of mystical experience. The image on the dollar should correspond with its character: a drooling, maniacal giant eating people, à la Goya's Saturn Eating His Children.

There is an excellent 5 part YouTube video called Money As Debt which explains money very lucidly. Easy to Google. It will blow your mind.