The need to define the parameters of existence, to put the stamp of finality on one's sense of the essence of human life, to characterize the gist in a few, carefully weighed, sentences, has always interested compilers of collections of quotations. Such compendiums are as often as not the repository of forgotten chestnuts, either too familiar or too obscure to be compelling.
Here are two such quotations, each perhaps just a bit long to fit into the the typical brief homiletic formula, but interesting nonetheless. The first, by William Saroyan, was the preface to his Pulitzer Prize winning play The Time of Your Life [1939]. Saroyan famously turned down the Pulitzer, saying he thought that commerce should not infect creative arts. 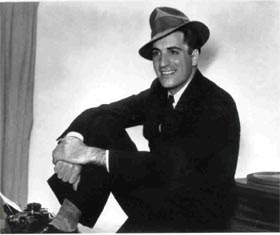 In The Time of Your Life
In the time of your life, live—so that in that good time there shall be no ugliness or death for yourself or for any life your life touches. Seek goodness everywhere, and when it is found, bring it out of its hiding place and let it be free and unashamed.

Place in matter and in flesh the least of the values, for these are the things that hold death and must pass away. Discover in all things that which shines and is beyond corruption. Encourage virtue in whatever heart it may have been driven into secrecy and sorrow by the shame and terror of the world. Ignore the obvious, for it is unworthy of the clear eye and the kindly heart.

Be the inferior of no man, or of any men be superior. Remember that every man is a variation of yourself. No man's guilt is not yours, nor is any man's innocence a thing apart. Despise evil and ungodliness, but not men of ungodliness or evil. These, understand. Have no shame in being kindly and gentle but if the time comes in the time of your life to kill, kill and have no regret.

In the time of your life, live—so that in that wondrous time you shall not add to the misery and sorrow of the world, but shall smile to the infinite delight and mystery of it.
--William Saroyan [31 August 1908 - 18 May 1981]
The statement is interesting for the somewhat politically incorrect sentiments it contains. Particularly, the business about the taking of life. Americans are typically ambiguous about such matter-of-factness regarding violence and death. Our largely protestant, secular culture, urges peaceful resolution, and humility in our relations. But we've fought our share of wars, and have usually been able to reconcile our religious teachings with the call to duty. Still, Saroyan's comment doesn't limit the principle to war; he clearly believes that there may be times when, defending oneself, or someone else, killing is necessary or unavoidable.
Robert Traver, the pen name of John D. Voelker, wrote both fishing books and straight fiction. A judge in private life, he retired early on the strength of his earnings from his runaway bestseller Anatomy of a Murder [1958], which was made into a movie [1959], to spend more time fishing in the Upper Peninsula of Michigan. 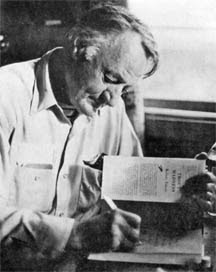 Testament of a Fisherman
I fish because I love to; because I love the environs where trout are found, which are invariably beautiful, and hate the environs where crowds of people are found, which are invariably ugly; because of all the television commercials, cocktail parties, and assorted social posturing I thus escape; because, in a world where most men seem to spend their lives doing things they hate, my fishing is at once an endless source of delight and an act of small rebellion; because trout do not lie or cheat and cannot be bought or bribed or impressed by power, but respond only to quietude and humility and endless patience; because I suspect that men are going along this way for the last time, and I for one don't want to waste the trip; because mercifully there are no telephones on trout waters; because only in the woods can I find solitude without loneliness; because bourbon out of an old tin cup always tastes better out there; because maybe one day I will catch a mermaid; and, finally, not because I regard fishing as being so terribly important but because I suspect that so many of the other concerns of men are equally unimportant - and not nearly so much fun.
-John Voelker (Robert Traver, June 19, 1903–March 19, 1991)
Because I share Voelker's love of fishing, this statement serves as a very useful kind of excuse for the pursuit of a pastime that may seem, to the uninitiated, to be an elegant way to waste one's time, like golf or needlepoint. The fatalistic pessimism--"I suspect that men are going along this way for the last time"--may seem like a bad beer commercial phrase, out of context, but the promotion of such virtues, to which trout may "respond"--"quietude and humility and endless patience"--seems an expression of an admirable civility, against the "posturing" and false "importance" of our daily commitments. It always puts me in mind of the camaraderie which obtains among friends on the water, in those still moments between the stirrings of interest or action, when sportsmen feel that sense of liberation of feeling and surmise which characterize the relaxed mind.
Posted by Curtis Faville at 2:08 PM

Im sort of against epitaph-ish generalizations but Saroyan's is not bad. His Fresno writing tho a bit low-tech perhaps still packs a punch, at least for some. His stories on WWI deserters are interesting (ie a Armenian boy who refuses his draft card and hits the road ends up the only one alive a few years later out of his neighbors and cousins, etc) --politically he seems isolationist.

Saroyan wrote realism of a sort... but...dreamy--wino-realism. He was a bad-ass too supposedly, challenged Hemingway to a brawl---when in his 60s he could be seen on his bicycle all over Fresno (and not too liked by the hicks)