Meet Soo-Mee. He's our new male Siamese kitten who joined the family on July 3rd (born on April 4th). We lost Lottie in January, to breast cancer (which spread to her lungs), and our other two Siamese needed a third member to recapture their social balance. We got Soo-Mee from a regular breeder in Marin County, and he was raised with sensitivity and lots of human handling in a quietly supportive household. 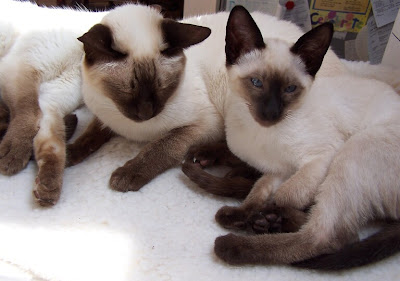 We have preferred the traditional apple-faced Siamese, over the show-worthy pointed-faced hybrids. Soo-Mee is an odd mixture, with a classic "pointed, curved" head shape--narrow eyes, and very large, triangular-starred pointed ears. That's him on the right in the photo above. Unlike most Siamese males, his personality seems altogether docile and trusting, and he possesses none of the feisty combativeness--at least not now--so characteristic of the type.
Siamese typically live between 12-19 years. I may not outlive Soo-Mee. Following a pattern we started 35 years ago, each cat is named after a coffee or coffee mixture. Sumatra's abbreviated name, therefore, became Soo-Mee, which sounds as if it might belong to a panda.
So these three, Mocha, Cocoa and Soo-Mee now happily co-exist with us in a symbiotic relationship whose rhythms follow the schedules of our days. Soo-Mee is somewhat less affectionate than Mocha and Cocoa, but with time he may come to "adopt" us as his life companions. People make the best pets.
Posted by Curtis Faville at 5:08 PM

Pretty. Siamese have the trippy eyes

I'm mo' fond of the greymalkin sorts tho.

Hello, we have always had appleheads but took a chance on bringing home an adorable male kitten this past November. Percy has developed into a beautiful "Classic" style Siamese and has a wonderful personality as well. His face is more applehead than wedgie and his ears point straight up and not out at all like bat wings. We are very happy with him and so far he seems to be happy with us!