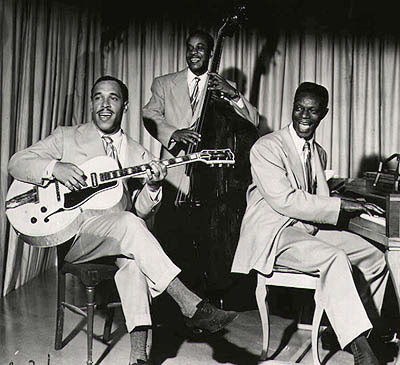 I've been You-Tubing lately, with predictable results.
There are things you seemingly rarely hear, or read, or see, but which are instantly recognizable, and inspiring, but which you always seem to "forget" about. I'm not sure why this should be. I've been listening to jazz, swing and pop for over 50 years, but every time I hear a piece by Nat King Cole's Trio, I throw up my hands and exclaim "Man, oh, man, that's the most underrated musical phenomenon of all time! It's been much too long since I listened to that, what could I have been thinking?"
Cole was among the first--if not in fact the first--to try out the small trio concept based around a jazz piano. Cole's Trio, him on the keyboard with a bass and a guitar back-up, later became the regular setting for a host of talented composer-singers such as Tatum, Jamal, Peterson, Ray Charles, etc. The idea of using a couple sidemen to weave a tightly focused harmony had been common in classical compositions ("chamber music") for centuries. During the Swing Era, the tendency was to expand the down-river Dixie "band" concept into a full jazz "orchestra" but the core Swing Era was fairly short-lived, and the Depression and War years made the big group economically unviable, and besides, times (and tastes) were a-changin'. Cole's intimate, upbeat, and jazzy-sexy singing prefigured the 1940's and 1950's torchy tradition, and Cole himself moved on, abandoning the keyboard in favor of straight stand-up solo voicings.
In my view (and I'm not alone), this was really a shame. Cole was a wonderful jazz pianist, certainly as good as anyone during his era (Teddy Wilson, Shearing, Earl Hines, Errol Garner, Bill Evans, Count Basie, etc.). Cole's years bridge the Swing Era, the early Bop and Progressive Jazz style Era, and finally the Fifties Pop style, eventually capitulating to Rock. By the mid-1950's, Cole had abandoned the keyboard (and his Trio) for television spots, and straight solo singing gigs. In retrospect, of course, this was really inevitable. The audience for purely instrumental solo-ing had always been limited, in comparison with the growing dance band and pop concert scenes, in addition to the lucrative recording business. As the Big Bands shrank or broke up, smaller groups like Cole's Trio could still find work, while the travel and board expenses were manageable.
There's a kind of easy ingratiating quality to all of Cole's music. Aside from the caressing baritone, which he was always in complete command of, his own arrangements from the 40's are always constructed around a distilled, integrated version, the very essence of any lyrical line. He was never a "virtuoso" showing off the way many jazz greats could be at times. It's interesting to speculate about what kind of solo keyboard work he might have done into the LP era, when sides could be expanded to 5 or 10 or even 15 minute sets.
If you had to choose, you'd certainly take the wonderful singing over the pianist, and mourning the loss of something like Cole's instrumental gift is really just a way of regretting the decline of Swing music in general, I suppose. Also, Cole's abandonment of the group seems to have spelled the end of his composing and arranging career. At Capital, he shared Nelson Riddle with Sinatra. Sadly, at the end, his only successes were the "novelty" tunes, like the "Lazy-Hazy-Crazy Days" and I'm always amazed at how young he was at his death, from lung cancer, at the age of 45 in 1965, the year I graduated from high school.
In 1948, when Cole purchased a house in an all-white neighborhood in Los Angeles, members of the local property owners association told Cole they didn't want undesirables like him moving in. Cole said "Neither do I, and if I see anybody undesirable coming in here, I'll be the first to complain." The Ku Klux Klan placed a burning cross on his lawn. Throughout his life, Cole dealt first-hand with racial prejudice, and eventually gave up performing anywhere in the South, after an incident in which he was almost kidnapped.
Listening to these old recordings from the 1940's and 1950's, I sometimes feel as I once did, as a child, that I had lived in an earlier time, and experienced the world my parents had, because the oppressively omnipresent vestiges and carry-overs from those years seemed so much more powerful than the world in which we actually lived (the 1950's and 1960's). And in a sense, that's true: the music and the stories and the memories of those who lived through the Depression, the War and the early years of the Cold War were a powerful evocation of a time that was more vividly alive than the world they created for their children. But we were soon to create our own dramas--Vietnam, the Counterculture and Conservative backlash, the whole Boomer phenomenon which is just ripening now into later age.
Here are a handful of YouTube clips of Cole Trio pieces:
http://www.youtube.com/watch?v=50efrirBImc (Better to be By Yourself) --check out the keyboard action!
http://www.youtube.com/watch?v=uKB_RpYvDNM (Moonlight in Vermont, piano solo--lovely meditative stuff)
http://www.youtube.com/watch?v=dy4I16awsow (Baby, Baby All the Time--I can hear early Jamal's style inside this arrangement from 1946)
http://www.youtube.com/watch?v=Qf55piLGFOo&feature=related (Sweet Georgia Brown--just for Cole's keyboard riffs)
http://www.youtube.com/watch?v=dWfE3Upy7jQ (Too Marvelous For Words - April 11, 1946, this is so much more lyrical than anything being composed these days, why wouldn't anyone be nostalgic for a time in which this was possible, instead of the crud being done today?)
http://www.youtube.com/watch?v=Qc5RMYvXOhA (Paper Moon--innovative keyboard riffs)
http://www.youtube.com/watch?v=vLNnHPXc4CA (What'll I do?--his very slow, romantic style)
Posted by Curtis Faville at 8:15 AM

Cole's Trio, him on the keyboard with a base and a guitar back-up

NK Cole was not a horrible jazz pianist and some of his music swings--or the bands did-- tho'...Art Tatum he wasn't (or Brubeck, Evans, Jarrett, Corea, Peterson et al [a hack perhaps but virtuoso hack]). I wouldn't exactly call him a sell-out but his success was due to his pop...or pop-jazz not really bebop

Haste makes waste, thanks for the tip--corrected.

I think you short-change Cole as a pianist. Many many critics have noted Cole's great capacity on the piano. He's always been "forgotten" in this regard.

The singing, as good as it was, was so much more fun when he had his trio. More chance for elaboration and innovation in performance. The further along he went, the more "perfected" his versions became, and hence someone emptier, albeit with an overwhelming charm and polish.

Cole was a player
Evans was a poet

I've never heard anyone accuse Evans of being a virtuoso. He had his own personal style, his compositions tonally intriguing and very difficult to untangle. Other pianists can't make his pieces "work" at all, the way he could. He was an effective accompanist. I have some of his piano music, and I can't figure it out.

But as a sheer entertainer, you just listen to his changes and subtle phrasings. Quiet.

say what you will
nobody stands shoulder to shoulder with bill evans in the 20th century
for piano chops
that cat stepped out of the normal run of things and played to the spirits
he had all the chops of horowitz and the driven imagination of bach and the soul one likened to lady day
.....

I agree paddy jh. Bill Evans created a complex musical art and was not merely an "entertainer". AS did Miles Davis and a few other jazz greats--tho' Davis had some...personal issues. Then so did Bill E.-- sad, tragic beauty, bot in terms of his music and life.

That said I would agree NKC had a certain courage as a musician and entertainer. Touring in dixie in 50s --rather dangerous (and I imagine the klan thugs knew of NKC...white wifey and did not care too much for dat)

Evans leaned over his key-board and his nose was so down-to-the Ivories that I thought that he would peck notes with his nose.

the bass player one of the very few four-finger bassists (an acoustic bass) was Chuck Israels ..

as he played he was eying/flirting with Marilynn


so, I went to the bathroom the moment the first set was over and the trio took their break

when I had returned Chuck Israels was sitting with Marilynn

after the 3 rd set was over and I asked for the check the waitress said:

"the bass player picked up the tab."

the greatest Evans album of EVER?

NKC was ... ok... a slick stylist
pleasant voice was the very first black to have a tv show.. it was live tv...

he and Ella Fitzgerald about as good in that genre as was popular..

i wonder if you asked marian mcpartland about who stood head shoulders above the rest in piano jazz in the 20th century she would nod to bill evans...i mean there was oscar p and george shearing and duke ellington and younger cats like keith jarrett all of whom could stand with evans but i would bet if they could bet they'd bet on bill
now i'm a big thelonius monk fan
and i'll listen to oscar any time those trios he did with joe pass and was it ray brown on bass? and mcCoy Tyner..well he was great too...still is

Tyner's best solo album was Revelations. I used to lend it to people, I thought it so good--and I never lend stuff.

Little known factoid: NK Cole was prior to... Mort....uh involved with one Gunilla Hutton, a young swedish hottie who latered appeared in Petticoat Junction and ...hee haw.

Bill Evans is the best jazz.p, even if not quite the showy virtuoso as say a Tatum. Tyner was overrated. As were most. Actually George Shearing was a great player, even if his style's a bit beboppish for most in Consumerland. I saw him play in Denver with a bassist once...he would be amazing even eyesight...as a blind person, quite stupendous... McPartland's not a bad jazzpianist either .
Steely Dan's keys dude Ted Baker has a fine jazzy style as well...(and check Miss McPa archives for....her with Fagen-Becker! quite entertaining)

Bud Powell? Herbie Nichols? Andrew Hill? Monk, of course. Or later on - and still playing - Cecil Taylor... Plus many more - Always difficult to say that someone is the best unless one adds the rider: 'In my opinion.'

Not to sound Adornoish, but jazz forms and jazz improv/harmony grow wearisome, eventually, grasshoppah. At its best (like Evans), jazz definitely can be intense, and ...some still entertains. Yet even Trane's music gets rather redundant. jazz greats are sort of akin to Paganinnis, not...say ...Schuberts.Or Beethovems, or Debussys,Stravinsky, Zappa.... or Messiaen
There's usually little compositional or thematic...meat-- Stan Kenton attempted a sort of classical jazz (as did others...even Duke E, to an extent). But that's not what sells beer, or CDs.

Messiaen Days on Faville.com! few cocktail jass numbers are as poetic as birdsong

I mostly just sit on
my back deck and listen to/for what-ever (sounds)
comes my way that includes my thinking...

which, also, willy-nilly, comes-and-goes and is always changing..

problem with c-d, vinyl, canned-music, for me,

is that it is fixed permanently on a delivery-system!
repetitive to the point of a boring predictability.

I remember seeing Ella Fitzgerald LIVE at The Carter Baron ... a fly flew into her mouth while she was singing... she choked, spat it out laughed and made some comment "this new arrangement"