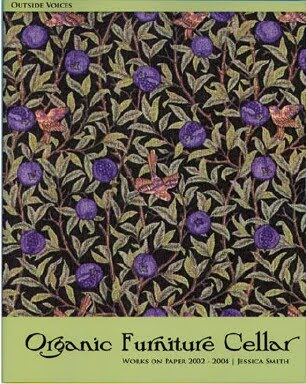 Part I (The Book)
Organic Furniture Cellar is a self-published work of 95 pages, 7 3/8"x9 1/4", a dimension whose scale is very similar to the old Wesleyan University Press poetry series design. It was printed by McNaughton & Gunn [Saline, Michigan]. The cover design fabric freize is an adaptation from a William Morris design. The covering wrapper is printed on matte sheen finish, and Smith-bound (trim & glue). The text stock is cool greyish-white. The text font is distributed Garamond, with titles in Arts & Crafts Hunter by P22 Type Foundry. I mention all this because the design of the book is by the Author, for whom the form of the presentation, and the implications of the design principles employed, are clearly important to the meaning of the work, and how we are to judge its effectiveness and ultimate significance.
Since I also self-published my first collected poems, Stanzas For An Evening Out [L Publications, Berkeley: 1977], as well as a later collection, Metro [Privately Published, Kensington, 2005] I am sympathetic with the Author's impulse to control the form of the presentation of her work, and would recommend the option to other writers seeking to disseminate or realize their texts in forms appropriate to their intention.
Historically, since the inception of moveable type printing, Authors have relinquished their texts to printers, book-binders and designers, as well as distributors and marketers and advertisers, causing an alienation of the artist-writer from the material text, and encouraging a separation of the maker from the object-product. This separation, aggravated by further mechanical sophistications over the centuries, has tended to reinforce the dependancy of the maker upon the machine, (and) upon the commodity production-system which controls the "publishing" of nearly all printed matter in the world today.
I have advocated an alternative system, which might return the maker of the text to the condition of an original artist role, where the choice of the "final" form of the text might be closely monitored, and in which the production of the text itself might be incorporated into the creative process, side-stepping the oppressive (and traditionally regimented) concepts of standard publishing procedures of materials and distributions, to explore the actual relationship between medium and inspiration, and facilitating a more creative connection between maker (artist-writer) and a probable "audience" (one conceived out of a revised and renewed sense of participation and interaction).
As the traditional "press" model of material text production has declined into obscurity, "fine press" production has continued to thrive, albeit modestly, at a tiny, marginal, "crafts" level. Too, fine press has continued to be governed largely by historically timid departures from "tradition" and the previous technologies of mechanical printing.
Thus, Jessica Smith's choice to self-publish, though admirable on its face, nevertheless encounters concepts of available alternatives, which bear substantial resemblance to pre-existing cliches of "book" production: I.e., the short-run university press prototype of the cheaply bound paperback book, limited by cost and mass market-driven choices of materials and forms (paper, type-fonts, length, and so on). Her choice to compromise her ambitious ideas of textual expression by delivering them in the pre-ordained material designed forms consistent with the clichés of the contemporary book production, bring into question the degree of her commitment to a really challenging vision of an expanded realization of the text. I would encourage Ms. Smith to think more about the potentials of a truly committed compositional methodology, if she is truly serious about seeing beyond traditional concepts of the generation of text and the relation to audience. Her presentation here is not nearly as opaque or obdurate as she may suppose.
My main complaint, aside from the issue of traditional presentation versus espoused interest in novel presentation, is that the choice to present the whole text in a tiny font (size 6?)--even the very lengthy "Forward"--is difficult to read. I can understand that many of the poems, printed at a larger scale, would require a much larger page size, but the choice of a larger font size printed on a larger page--say, 8"x10"--would yield a much more comfortable read, and might emphasize the dramatic atomization of effect which seems to be part of what she is striving to achieve. I mention this, again, because Ms. Smith makes a point of wishing to challenge, or "subvert" the traditional approaches to reading procedure, and because she had the freedom to determine such parameters of presentation.
_______________________________________
The title of the work, Organic Furniture Cellar, is derived from the name of a small, second-hand used furniture store in Cambridge, Massachusetts. "For me the store name evokes an exploration of memory, of mnemonics, of the organic cellar of the mind and its structures. What stirs one's memory--the precise color of an autumn leaf, the smell of a city, the repetition of dates, the retracing of a well-known path--stirs an entire mnemo-topological system." Here is a photo of the shop in question-- 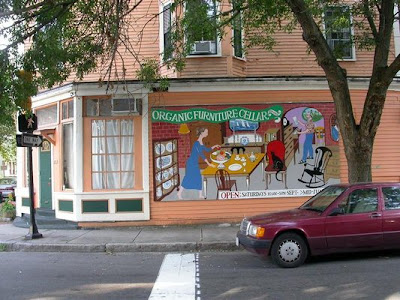 "I have advocated an alternative system, which might return the maker of the text to the condition of an original artist role, where the choice of the "final" form of the text might be closely monitored, and in which the production of the text itself might be incorporated into the creative process..."

Curtis, the writer as artist engaged directly in the process of production is a new idea that's, in fact, quite old. It's sort of reminiscent of a pre-print culture of illustrative texts, each page consisting of images and specialized typography, the work a joint labour of specialized skills unique to authors,editors, etc. Of course, the "illustrative" is replaced by its contemporary variant (the text as whatever the author wants it to be).Are you advocating then a return to the age of "scribes" but with all the conveniences of contemporary printing conventions?

The more multidisciplinary,variegated approach to publication in which book making is returned to master printers and artists/writers revisit their old chanceries and courts is maybe a bold way to preserve the integrity of the text.It seems to me the 'small press' runs very much in the spirit of that collaborative model, with digital graphics and advanced font & page layout designs (of the kind that a program like InDesign offers)within easy reach of just about anyone.

Any person has the right to publish whatever the f**k they want, in any format, style, chapbook, jackbook, jokebook whatever. And everyone has the right to ignore it completely-- except perhaps when in the wilderness, or some desolate coast and in need of some kindling, or....toilet paper....wow... in the bottom of ye olde rucksack Jessy Smith's collected works...and a large chunk of Silliman paper...comfort n relief! Bible, or Moby Dick or collected schackaspeare--that's not just literature, but fuel, brooder .

Since you are “bring(ing) into question the degree of her commitment to a really challenging vision of an expanded realization of the text” on the basis of the conventional surface of this book, you may be interested to know she has produced at least a half dozen different kinds of physical texts applying different forms of book art and sewing, such as her “Butterflies” and her magazine “Foursquare” and poems consisting of objects in boxes. The large print version of OFC has yet to be published and I look forward to seeing it at my local box store.

You seem to be confused as to whether the Plastic Poetry essay is “unoriginal” or whether it expresses an original idea that you wish to find untenable, so just to make sure, you make both claims. Your own view of the meaning of meaning in Enlightenment could have negated the interpreted meanings of Blake, Browning, Joyce, Eliot, Williams, and Zukofsky, but you list them in support of a view they oppose: consistently in most cases and in Eliot's case, in his most important work.

And you “believe that the work is easily accessible and self-evidently apprehensible on its own, without any need for warnings, instructions or explanations” but “without her Forward, the poems may be seen as empty arrangements, fragments without a compelling formal purpose or function.” You are so busy composing the antithesis to any idea of a writer you've decided ahead of time to criticize that you don't check over your work to make sure you're consistent in so doing.

Yes, but I'm dealing with the book in my hands, not another version, not her sewing or her little boxes. Stay on point.

"You seem to be confused as to whether the Plastic Poetry essay is “unoriginal” or whether it expresses an original idea that you wish to find untenable, so just to make sure, you make both claims."

There is nothing I read in her essay that I consider original, critically. It's what she THINKS it means to her own work that's pertinent. She thinks the essay's an explanation and a defense of what she's done, but I don't buy that. No one would argue that Apollinaire's rain poem is more than just "calligraphic" but her own work doesn't even make this simplistic kind of sense; it's more "complex" but also empty and unorganized. This "complexity" claim is purely gratuitous, you could say it about a handful of garden soil with the same validity.

Let's see if I can rephrase. Her work is both simplistic and confusing at the same time. If you don't give the reader adequate syntactical structure by which to impute connections, you leave it all to chance. I don't buy this "precisely arranged down the the minutest detail" nonsense. Her poems could each be jumbled up and rearranged and they'd be no more compelling than they are now, except by accident. Maybe that's what I'm getting at--happy "accidental" marriages of sense aren't good enough; the poet has a responsibility to build in more than "probable" versions of the reading experience. "All interpretations are correct; none is wrong." Bullshit.

Ian, I'd be interested to know what you think of the work, rather than what you think of my possible critical contradictions. You're defending her without making any positive statements about her poems. Do you buy her claims for her work?

As an example of how to make positive, demonstrable use of space on the page, I'd suggest you read the work of Larry Eigner. Blackburn, too, is very shrewd in his manipulation of the movements of the eye and the prosodic rhythms. There is nothing of these qualities in Smith's work.

Massey's simplistic applications at least show some modicum of control--though frequently awkwardly done--and modest changes and wit. They aren't particularly impressive, but at least he's trying, and not making excuses.

To answer your question, I don't see how a manifesto need be in a different book from the poetry until someone comes along to edit selected writings, and don't think it's difficult to find the poems consistent with the theoretical propositions. Coolidge and Eigner have been very interested in how the poem mirrors the mind's relation to time and space and Smith is being more rigorous about how time and space is represented in the poem. That the poems represent specific places and attempt to mimic the structural qualities of them leads to poem to establish where they are reflections and internalizations, just as there is no right way to proceed through space but certain laws tend to perpetuate themselves. The essay simplifies the calligraphic method a little in criticizing it but does so in inspired fashion. Instead of representing objects from which the reader is separate, the reader populates the space of what is being read, and simultaneously is and isn't remaking it. The most political of the poems, Lestrygonians, is nonetheless an extension of the enfranchisement to populate time, space, memory, and the natural world. Memory is covered more in Butterflies, but these representations of space are still units of memory, as they are a collection of the observed qualities of different places. To be open to these possibilities is to get more out of these poems than one usually gets from lyrical or rhetorical poems.