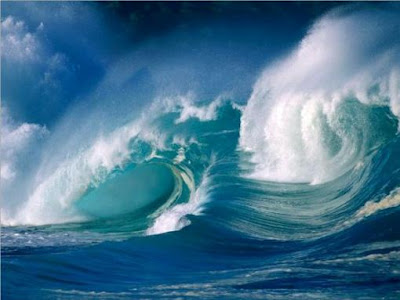 Claude Debussy [1862-1918] occupies a crucial position in the history of the development of musical styles. Trained in the academic French tradition, he broke away from the formalist expectations of his contemporaries to create a strong, personal style, characterized by an impressionistic, subtle palette of colors and orchestral effects. He composed for a number of different combinations of instruments, but his instrument was the piano. His major work for orchestra is undoubtedly La Mer [1903-1905], the quintessential musical monument to Impressionism. Classical music in the late 19th Century was bound by preconceived notions of musical form. The classical sonata format, adapted to the increasingly lush, expansive, ambitious Romantic symphony, dictated that serious music be composed in tight, triadic groups--exposition, development and recapitulation. The Romantic composers frequently added a fourth movement, usually between the second and third parts, a kind of recess or recreation, before the serious finality of the ultimate section. This strict ordering dictated that musical ideas be formulated in a fairly rigid manner. A composer was expected to state his theme, develop it, and then present a kind of ultimate transformative sublimation--a cathartic journey from resolution to meditation (or questioning, or wandering) to conviction (or truth). This conceptual frame was a very powerful tool throughout the Classical and Romantic periods of music, but by the end of the 19th Century, certain musical minds (such as Debussy and Satie) were beginning to chafe under the regnant domination of this code of acceptable practice. 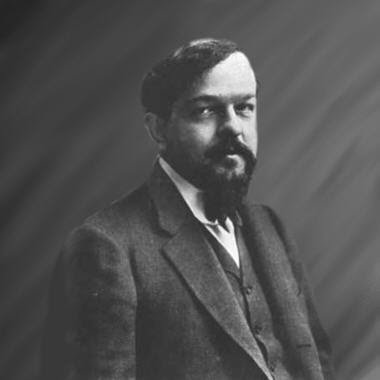 There were allied developments in the other arts, of course. In painting, representation was being questioned, and manipulated (Cezanne, Monet, Picasso). In literature, the Symbolists were transforming poetic doctrine (Baudelaire, Verlaine). In popular design and architecture, Arts & Crafts and Art Nouveau were in vogue. Freud and James were delving into human behavior and the Unconscious. Henri Bergson [1859-1941] was theorizing a dynamic creativity, unhindered by the restraints of time and space.
Debussy's early works are notable for their delicacy and sweet or tart lyricism. He did not essay larger, more ambitious forms until his mid-thirties, when he completed the three Nocturnes [1899] for orchestra,* his only opera, Pelléas et Mélisande [1902], and La Mer [1905]. These new works challenged both the structural constraints of the classical tradition, and the harmonic techniques perpetuated by the Viennese School of composition. He found inspiration in the work of Russian composers, such as Rimsky-Korsakov, Borodin, Mussorgsky, Tchaikovsky, Balakirev. From them, came an "oriental" exoticism and faux ancien mystical quality, which would find their way into his mature work. 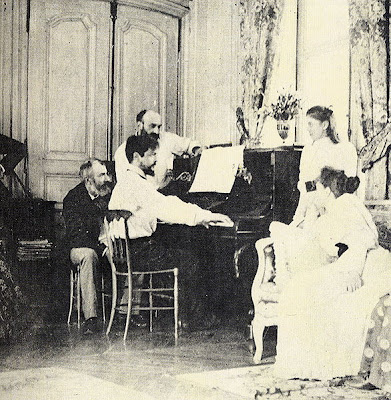 The other primary innovation in La Mer is its programmatic element. Music composed for the opera, the dance, or for café society or sheer popular entertainment, was distinguished from "pure" music, that is, music composed within the formalist traditions growing out of patronage and the classical orders of serious, concert-hall, or chamber performance. La Mer challenges all these presumptions, building up sound impressionistically, rather than through the formulaic procedures used by, for instance, Brahms, or Saint-Saens. Sheherazade [Rimsky-Korsakov, 1888], Pictures at an Exhibition [Mussorgsky, 1874], The Nutcracker [Tchaikovsky, 1892], the Polovetsian Dances [Borodin, 1890] each prefigures impressionistic use and meaning through spontaneous orchestral effects, nativistic thematic material, and impressionistic technique. Adapting these examples, Debussy contributed his own crisp, refined French personality, to produce the works upon which his popular reputation is based. 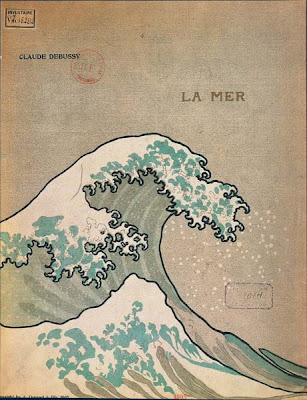 The cover of the sheet music for the score of La Mer: Three Symphonic Sketches [Durand]
La Mer, like many of Debussy's compositions, is moodily romantic, wreathing tendrils of delicate melancholy and nostalgic longing around certain repeated figures. A typical performance of this piece lasts about 24 minutes. It is in three movements:
(~09:00) "De l'aube à midi sur la mer" - très lent (si mineur)
(~06:30) "Jeux de vagues" - allegro (do dièse mineur)
(~08:00) "Dialogue du vent et de la mer" - animé et tumultueux (do dièse mineur)
Usually translated as:
"From dawn to noon on the sea" or "From dawn to midday on the sea" - very slowly (B minor)
"Play of the waves" or "Play the waves" - allegro (C sharp minor)
"Dialogue of the wind and the sea" or "Dialogue between wind and waves" - animated and tumultuous (C sharp minor)
The work's three-part structure suggests a symphonic arrangement, but the music is highly suggestive in ways that are not structural-driven. Sound grows out of the emotional progression of feeling, rather than out of a theme played within a rhythmic tempo. There is no mistaking the subtly "oceanic" or "wave-like" quality of many of its passages, but the gentle dissonant harmonies, its surprising annunciatory interjections, and rapid modulations of mood and pacing keep it from seeming monotonously progressive. Then there are effects of spray or swishing/dashing sounds, which punctuate the evocative, meditative ethereal streams of sound. Instruments in the orchestra become like the respective metaphorical forces of the natural world (wind, water, storm, flux) though without forming a narrative picture. 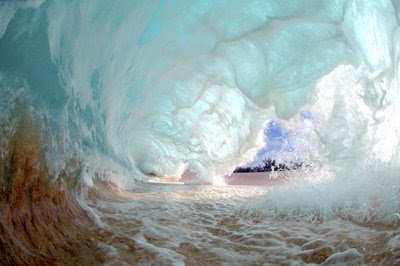 The work hovers between pure music, and an evocation of natural forces. Later composers--especially those working in the theatre, or in cinema, ransacked Debussy's discoveries and inventions, to exploit the combinations and pacings which he employed to such miraculous effect. Obviously, furnishing photographs or paintings to suggest the qualities in a complex piece of music is a tawdry gesture. The best way to experience what I've been talking about here is to listen to the music yourself, which has become easy enough via YouTube@. I have several recordings of the work, but I've only heard it performed, once, by the French National Orchestra--wow, what a performance it was! One of their warhorses, certainly. 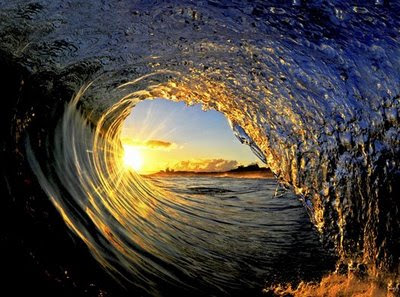 The Impressionists were masters at creating moods, sometimes exotic, sometimes familiar. Debussy himself resented being called an Impressionist, perhaps because the term tended to suggest a haze or cloud-like quality, a state of atomized randomness or mist. Actually, Debussy frequently employed mathematic concepts in his works, like the Golden Section. Can music, the most fluid and most deeply expressive of all the arts, be mathematically precise and emotionally effective at the same time?
I also have the piano reduction of the full score, just to sound it out--but it's not really suited to the keyboard as performance. Years ago, I wrote a prose poem, which owes something to the imaginative space the piece sets into motion. It was published in my collection Stanzas for an Evening Out [1977].
Far Inland
In small California towns it is just evening.  Fountains
come on, the grass blackens, the miniature orange
tree behind the sliding glass door turns, almost
imperceptibly, towards the first pale moonlight.
On the Pacific, way out, the waves, anticipating
the continent, are closing the ring, slow breakers
rolling up the dark sea mummies, pulling them back
again, unravelled, as undertow.  The cliffs are
steep at night.  Along some deserted stretch of shore
a large section of land falls into the sea, like a
vague memory, dissolving.  Far inland, a man turns
over in his sleep.
Debussy once described Albeniz's Iberian Suite for piano as a miraculous evocation of romantic thought, underscoring his interest in generating visionary, dream-like states, or idyllic exotic projections. A piece of music such as this can be like a conch shell that you hold up to your ear, the faraway "shhhhhhh" of distant shores, of the rolling almanac of sea voyages, both literal, and imaginative, to shores unseen, worlds yet unexplored.
________________
* Actually, I frequently get my memories of the Nocturnes mixed up with La Mer--you can hear many of the same kinds of sound, for instance, in Clouds [Part I].

Posted by Curtis Faville at 3:20 PM

I have a CD of La Mer and other of Claude's greatest hits, and enjoy it for the most part...the trumpets in La Mer sound sort of jazzy. Also percussion--tympani as they say impressive. The last 5 minutes or so quite dazzling. Some of Debussy's musick gets a bit sentimental but never just maudlin, or...sinister (as Ravel sounds to these ears). I think he was a bit naive (maybe in good way) and often writing for children. He died during a nasty German bombing run on Paris.

Unfortunately (as you note) his music has been ripped off and pimped more or less, even early on--many old flicks and TV shows have Debussy like harmonies and so forth. The I Love Lucy hack often snuck in Deb. sounds...or Star Trek for that matter (and jazzers)

Curtis, have you considered making Stanzas for an Evening Out available as a PDF download? Perhaps for the Eclipse site?

Erik Satie heard the premiere of La Mer, and told Debussy he especially liked the 1st movement, "From dawn to noon on the sea," particularly the part about quarter past nine. It's a marvelous comment on program music, but Debussy never spoke to him again.

Stanzas is still available to anyone who wants it. I have many copies stashed away. SPD still lists it.

Charles: I once read that when they asked Saint-Saens what he thought of La Mer--or was it Pelleas?--that there was no "there" there, or something like that. But Saint-Saens' piano concerti are truly wonderful. They'll get you up in the morning.

I see where Chez Panisse has lost its Michelin star. Oh, my.

SO was Elliot Daniel, or perhaps Wilbur Hatch the Wunderkind behind the I Love Lucy musickal smorgasbord? According to Wiki, Daniel wrote the theme, but Hatch composed the music for many shows. I wager Hatch was the modernist, and Daniel sort of the traditionalist--much of the show music seems quite odd, polytonal and intriguing--tho with noirish touches-- while the primary themes seem rather schmaltzy. Wilbur Hatch, great American composer.

I heard the FNO perform this at the BBC proms this year - it was an utterly amazing performance! Did you mention you had a piano reduction? Where did you manage to find it?

I got it many years ago in Berkeley, imported. Published by Durand with that same Hokusai wave motif design on the front cover.