I find myself writing again about professional sports teams.
As a boy, in the household where I grew up, listening to and watching pro sports, on radio and television, was important. My Stepfather, Harry W. Faville, born in 1901, had played varsity basketball in high school in or near Madison, Wisconsin. There was a team portrait made (in 1915 or 1916?) showing him as the center (he was 6'3" which would have made him among the tallest men of his generation). Harry had an athlete's body, and if it hadn't been for his heavy smoking, probably would have remained healthy into his 80's, if he hadn't died in an automobile accident at age 72 in 1972. As early as the 1920's, he had followed professional sports with a keen interest. You Know Me Al [Ring Lardner] was a favorite book, and he liked to talk about the big stars of the 1930's and 1940's. One of my earliest memories was of listening to a baseball game on the radio, hearing the name Pee Wee Reese and thinking it funny. This would have been in 1953 or '54.
When the Giants moved West in 1958, they immediately became the focus of his attention. The 49ers had been formed only a few years earlier, and in 1957 they narrowly missed going to the championship game, losing to the Detroit Lions, who beat the Cleveland Browns 59-14 in a game which I watched on our neighbor's television set.
With both the 49ers and the Giants as home franchises, there always seemed to be another game to listen to, or to watch.
Since moving from New York to San Francisco in 1958, the Giants have never won it all. They narrowly missed in 1962, when a screaming liner by Willie McCovery in the last of the ninth inning of the 7th game, was stabbed by Bobby Richardson. A game of inches! Then there was 1989, the so-called "Bay Bridge Series" with the Athletics, which they lost in four straight. Finally, they seemingly had brought it off against the Angels, leading 5 to 0 in the top of the 7th inning of game six, when the Angels suddenly produced six runs in their last two innings to win it, then went on to take the 7th game handily. The 1962 team was by far the best the franchise has been able to put together in those 64 years, so the drought goes on.
This year, the team brings one of the most impressive pitching staffs in the history of the game, with three top-flight starters (Lincecum, Cain and Sanchez) backed up with a superior bull-pen, anchored by All-Star closer Brian Wilson (48 Saves in 2010).
The NL West wasn't decided until the second-to-last game of the regular season, in a head-to-head series against the Padres. The first round of the playoffs, pitting the Giants against the Wild Card Atlanta Braves, currently finds the Giants leading 2 games to 1, following an improbable late ninth inning rally culminating in an unearned run on an error by second baseman Brooks Conrad.
The Braves franchise has been moved twice in its history, leaving Boston for Milwaukee in 1953, then moving to Atlanta in 1965. In 1976, the Braves organization was purchased by ambitious media mogul Ted Turner, who made the team a centerpiece of his fledgling network station WTBS. For the first time in history, a single team (Braves) became a regular on the national air-waves. Turner's broadcast booth team, shamelessly partisan, pretended that the Braves were "America's Team" (as the Dallas Cowboys eventually were promoted). The team achieved success in the 1990's on the strength of excellent starting pitching (Glavine, Maddox, Avery, Smoltz). The last 20 years have seen the team regularly in contention in nearly every year.
One very tiresome aspect of Braves baseball is the so-called "Tomahawk Chop"--in which the fans in the stands wave dark red foam indian hatchets back and forth, to a fake indian chant played on the public address system. It's an annoying piece of moronic, racist schlock and makes my teeth ache every time I hear it. I always think the Braves fans must be real rednecks to practice this nonsense.
As I speak, the Braves are up 1 to nothing in game 4, but it's only the 5th inning. Nevertheless, the Giants haven't managed a single hit against Derek Lowe. 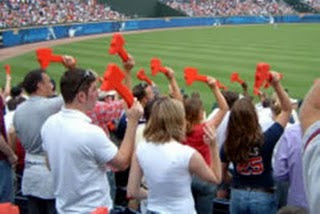 Readers of this blog know well my harangue against Alex Smith, the 49ers 1st round draft pick who has become the Quarterback that never was. Yesterday, against an only average Eagles team, after a key interception and a needless fumble by Smith, the home team fans were booing loudly and demanding he be replaced by second string back up David Carr. Singletary confronted Smith publicly on the sidelines, berating him and demanding to know (according to report) why he shouldn't bench the bumbling QB. Smith stammered his embarrassed determination, and was allowed to finish the game. Despite taking the team on two impressive touchdown drives, he still managed to throw another game-ending interception under a heavy rush, and the team lost its 5th straight to start the year. Everyone keeps reminding us that Smith is very intelligent, has a great arm, and is not a quitter.
However, NFL quarterbacking isn't about talent, it's about performance. Success at the college level is usually a prerequisite to a great pro career, but it isn't a guarantee. Far fewer college All-American QB's become stars in the NFL than wash out, their names fading quickly from memory. It's even rarer for a promising young quarterback to mature slowly into stardom. If a young draft choice hasn't shown some flair by his third or fourth season, he's usually relegated to permanent back-up duties, or shown the door. In Smith's case, the unfortunate shoulder injury in 2008 has been used as a pretext for giving him a bit more slack than would usually be accorded to a journeyman. But Smith's performance this year bears an unfortunate resemblance to his earlier campaigns. Despite four years previous experience (including 2 full years), he's still making rookie mistakes, throwing into coverage or timidly dumping off to a half back in the flat. His passes still routinely sail over or wide of target, and he has bad "eyes"--the quality of seeing patterns and open receivers downfield.
Singletary's success as a head coach will depend upon his ability to solve this quarterback problem. If I were he, I would go to management and lay my cards on the table: Smith is a wash-out, and the organization has no choice but to acknowledge this fact, sooner rather than later. They can play Smith, with lowered expectations, and expect to bottom out in the standings, and then use a first draft pick to choose a new star from the college ranks. The other option...well, there isn't any other option. They can't go out and hire a free agent at this point. I wish we hadn't let Hill get away! 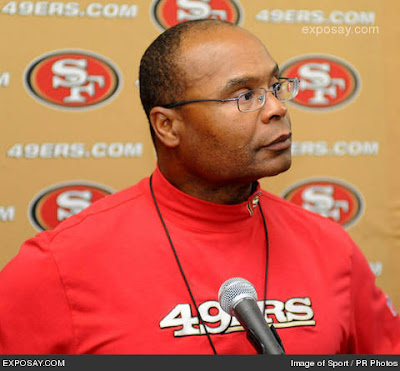 HC Singletary seems like a warm, committed personality, who genuinely wants to do the right thing. He wants to inspire, the help his talented players be "the best they can be"--and there is a good deal of talent on this team. But without a dependable quarterback, it's an uphill struggle. It's a recipe for tragedy.
Posted by Curtis Faville at 8:13 AM

Must still smart, Curtis, that Ron shut his comments down, now that you only have idiots like Kirby and J to banter with. You need a new hobby. Better yet, try writing a decent poem, something you haven't done in about 30 years.

I hadn't seen the tomahawk cheer of the Braves' fans. It's quaint, but testifies to the fear that braves sent through settlers back in the day, and is now reappropriated back into support for their local team. It gives the team a sense of their own history.

I suppose I still put freedom of expression as an ultimate good, even within something as pat as what fans choose to do in large stadiums. I'd rather see what individuals choose to say on their own, rather than what the state forces them to say. Call it a quirk.

I feel sorry for the one woman in the picture who doesn't have a tomahawk but is pretending.

Sports were really important in my family growing up, too.

I still like the whole idea of competition. It's exciting, and puts thrill into life. I am against the notion that the state should mollycoddle us and we we give up all our individual freedoms in exchange for a hut and a bowl of beans.

Who was the guy who wrote about American Indian life that Rexroth liked? He enjoyed their savage ways, and how they got to live outside. I think sports gives us back something of that thrill.

How 'bout those Niners!

Nationalize sports (which is to say, remove the Mob), and pay 'em all about what maintenance guys get

Back in your hole, troll.


S-man's site's even more bor-reeng now. Previously there were a few lit-gals, hipsters, and occasionally entertaining blog-battles-- . Now it's...all S-man, all the time, with his laundry lists, and the usual "the Beat generation is my aeroplane." I think he's slightly mad, actually.

Note that S-man did not even bother mentioning the Huntington Bukowski exhibit --he seems to have some weird anti-West coast thing on (unless it's something...queer from City Lights). Not that big of a deal, but symptomatic.

Bukowski fest on F-ville! A bit...shabby for Sir F.com but I wager Buk. would bring in some traffic. Actually I am not that big of a Buk. fan but his best writing represents something nearly admirable--urban survival at least. And....dames.