Xanadu: Karpilow - A Study in Descent

The evolution of creative ideas is a fit subject for students of history. We cannot consciously not know what came before; or, if we consciously refuse to know about the past, we risk repeating previous "discoveries" or the mistakes others made before us.
After returning from Japan in 1986, I undertook a project, to photograph parts of the American West, with my large format view cameras--a project which took about 10 years, but was still incomplete when I abandoned it in 1996, after the death of my son Randall that year.
One of the areas I explored was the California coast. I would drive up and down Hiway One looking for "subject matter"--views or aspects that might repay the time and effort of setting up the heavy tripod, camera, lenses and film holders preparatory to making even a single exposure. One afternoon as I was driving south of Big Sur, I noticed this tree growing in a narrow ravine just off the road. Looking east toward the foothills, I noticed that the property might be part of the Hearst Castle estate skirting the edge of San Simeon Bay (though it may have technically been part of San Simeon State Park). The road-side fence was four-foot high barbed wire, but barbed wire never stopped an intrepid landscape photographer, and trying to get permission to trespass in rural areas is like trying to get an audience with the Pope. "4x5," I said to myself, and lugged the equipment under the top course of wire. The tree was an oak, and the way it stretched waaaaaaaay out over the cropped pasture seemed very artistic to my eye. Only the continuous action of westerly winds over the life of the tree, could produce this windswept profile. The scene spoke to me. I probably was using Tri-X rated at 320 iso, unfiltered with a normal length lens. 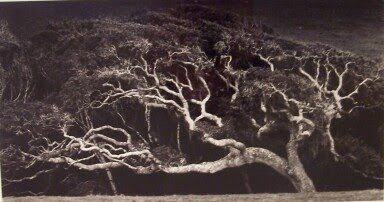 Some years later, in 1991, when we were building our house, we were referred by our architects (Silverstein-Jacobson) to a local woodworker named Miles Karpilow (pictured below). Miles, as I later learned, had been a book scout back in the day, who had rummaged the West Coast used book network, along with companions Larry McMurtry (the novelist) and David Meltzer (the poet), when they were each struggling and relatively unknown. I wasn't a bookseller in those days, and Miles wasn't scouting books, having (instead) become one of the world's most admired and respected contract custom wood workers, turning out signature furniture and architectural component designs inspired by the craftsman tradition. His doors and chairs were, and are familiar features around the Bay Area. We decided to have Miles make the front door for the new house, an oak behemoth as wide as two men, with carving and leaded glass decoration. The inspiration for the carving was the photograph you see above, taken in 1987 at San Simeon. 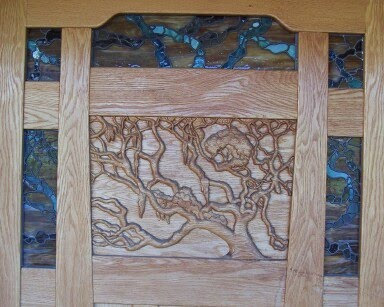 The tree design was right in keeping with Miles's craftstman specialty, and he set about making it while the house was just in the foundation stage of construction. People who've seen it in the two decades since, inevitably say it reminds them of Greene and Greene, and I wouldn't argue with that impression. Miles let his inspiration be guided by the traditions of woodwork design which had come down through the examples executed by masters. Greene & Greene, Maybeck, Julia Morgan. In fact, Morgan had been the guiding architect for William Randolph Hearst's Castle at San Simeon [1922-1939], a project that was as open-ended as any such commission is likely to be, almost a kind of Medieval process. 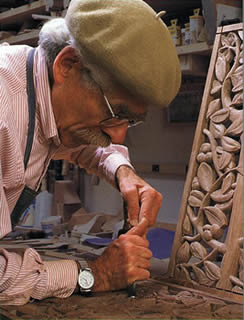 When Orson Welles set about satirizing Hearst and his many triumphant boondoggles, in the fictional cinematic biography Citizen Kane [RKO, 19041], he renamed Heart's Castle "Xanadu" while incorporating many of the characteristics of Hearst's La Cuesta Encantada ["The Enchanted Hill"]). Hearst was so embittered by Welles's damning portrayal of him, that he was able to get Welles blacklisted out of Hollywood for the rest of his career.
Did Welles suspect that Hearst would be powerful enough to abbreviate his career to this degree? Would he have undertaken the ambitious movie, had he understood that it would mar the rest of his creative life, forcing him to work through his prime in Europe, on secondary projects, and expedient acting parts, scratching out a meagre living? 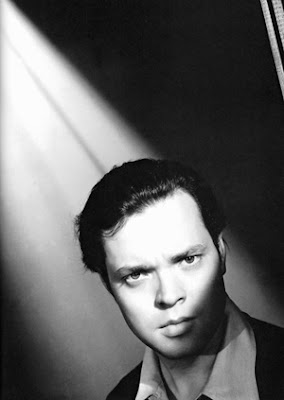 Perhaps the most supreme irony is that the movie is considered by many to be the greatest cinematic masterpiece in history, the very height of movie technique, editing, and powerful portrayal--both of character, and of history--a kind of idealized newsreel of the 20th Century. A sad commentary upon America, and the sort of men who've dominated our culture for nearly 200 years. It's likely to remain as the preferred version of Hearst the man for many decades to come. Often times, the embellished portrait is the one history remembers. In this case, one could hardly ask for a more poetic outcome. 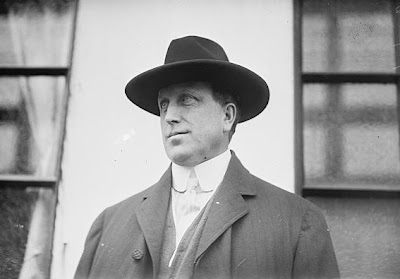 In any case, every time I come through the door, I think "Xanadu" and Samuel Taylor Coleridge and Orson Welles and Miles Karpilow and William Morris and Greene & Greene and William Randolph Hearst and Citizen Kane. Long after I'm gone, when the meaning of the door has faded into obscurity, someone will see that carving and wonder what inspired it. The meaning will undergo transformation and find new life in another time.
Posted by Curtis Faville at 12:01 PM

Nice carving and interesting story and Big sur to San Simeon quite beautiful country... or was, and I enjoy Welles-product to some extent--Mankiewicz probably as responsible for Kane as OW.

That Xanadu on the coast range, Hearst Castle, on the other hand nauseates me, however exotic, posh, luxurious etc. The tours themselves are cheesy--"Gloria Swanson once humped so 'n so in this golden room... Willie Hearst swilled his favorite German pils in this room.... F Scott Fitzgerald puked near here...." And pretty pricey now...generally cold n windy up on the ridge...(quite a view tho)

It's a grand complex--the exotic pools especially ( the CA Park service has tamed it down--took down the nude statues, etc) but ostentatious, tacky, outre as they say. Has some reaching for their notes to Bakunin or something.

That said, Hearst was not a complete villain, or did not start as such, so I can understand some of the resentment (and not only WRH, but many Ho-wood types). He was actually sort of a progressive when he started out, had Twain and Ambrose Bierce on his staff (did he not)--the Joseph Cotton character in Kane supposedly loosely based on Bierce. They took on the railroad-barons, etc. And Hearst made millions (not sure his writers did)--especially with the span-Amer.war, so forth--you probably know the rest. But could have Welles/Mank. had their own axes to grind?? Possibly.

I don't think Welles was exactly a socialist (as some said)-- and IMHO he was just sort of a talented theatrical type--a Schackspearean!--not a Ingmar Bergman... but ...perhaps tied to some people who resented the old Hearst and his crew who had skewered men like...Leland $tanford, for one.