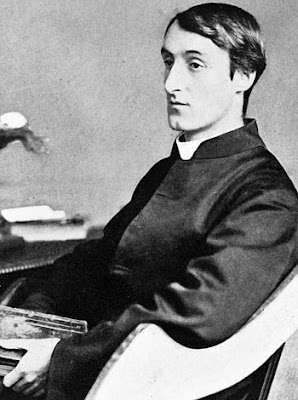 I remember the first time I heard--rather than read--this poem. I suppose I must have first seen it in a little paperback anthology (probably the Washington Square edition edited by the redoubtable Oscar Williams). Hearing it read, deliberately, to emphasize its eccentric accentual flavor, by a teacher, it struck me then as a tiresomely overdone exercise, a pretentious, cocked-up assault on ordinary speech rhythms, designed to overcome or overwhelm comprehension through its exaggerated metric. It didn't help, of course, that the sense of the poem seemed obscured or concealed behind strange constructions and similes, odd descriptive vagaries. I wondered, would it seem more natural, if I had been a British speaker? Years later, reading William Carlos Williams attempt to delineate his theory of the American variable foot--and still later, reading Charles Olson's "heave of the trochee"--I was reminded of my earlier quandary in trying to configure the rhythmic patterns of Hopkins into a settled, consistent diagram.
But no speech lends itself to diagrammatic consistency, certainly not speech based on ordinary spoken intercourse. The separation between "poetic speech" and "spoken speech" has always derived from the tension between the application of theoretical concepts of form, versus the insistent habitual usage which characterizes how we actually talk.
Hopkins believed that the English pattern of speech contained within both the folk and popular literary traditions (Shakespeare, Milton) exhibited a poetic rhythm which he named sprung rhythm, and he designed his poems as demonstrations of the use of sprung rhythm as a principle of composition. Do Hopkins's poems read like imitations of natural speech patterns? I suppose that depends upon how one talks, and when one lives in history. Would a 19th Century, educated Englishman find "...how he RUNG upon the REIN of a WIMPling WING/In his ECstasy! then OFF, OFF FORTH on SWING" to be a natural way of speaking in conversation, instead of a peculiarly artificial construction designed to wring the ear with clanging accidentals?
What my ear heard first, at age 16, sounded as jagged and craggy as a some thrust of granitic outcrop, weathered into weird shape, gaunt and arrogant against a tormented sky. Perhaps in a psychological sense, what Hopkins was after was not ordinary speech, but constructions of irregular rhythmic sequences, in which classical prosodic feet could be varied according to the demands of the case--to descriptive emphases, to specific emotional expressions, which each instance cried out for. There is the old adage about understanding the rules, first, in order to be allowed to break them.
The Windhover is a Petrarchan sonnet, but one totally unlike any that had ever been written before. The use of emphatic alliteration, coupled with the heaping up of effects ("dapple-dawn-drawn" "riding of the rolling" "blue-bleak embers") yields a surfeit of impression which seems well over the top of any tempered approach to straightforward descriptive or musical effects. It is just this unbridled enthusiasm which characterizes Hopkins's style. A Roman Catholic Jesuit Priest, Hopkins was conflicted in his personal life. Within the confines of Victorian society, his homosexual tendencies could not be openly acknowledged, nor naturally expressed. Hence, much of his sexual and emotional energy was diverted into religious fervor and devotion, and the poems seem the very embodiment of frustrated sensual longing and suppressed, thwarted passion, unfulfilled, philosophically denied.
This sense of a voluptuous, epicurean appreciation of the sensual aspects of the natural world is everywhere present in the poetry. Hopkins believed in something he called "inscape"--the specific character and structure of any individual object or being, its rhythm, its texture, its formal properties, its mystery--and the objects and sensations in his poems comprise an exploration, or exploitation, of the internal landscape or "inscape" of the things of the natural world. Hopkins's world is dense, packed, crowded with an intensely felt and experienced sequence of sensory impressions. In moments of psychological intensity, the world presented itself to him as a panorama of complex, interlocking structures, vivid and potent, connected by his pent-up erotic impulse, to rein nature into an ordered form that would contain his tendencies, while providing the ironic occasion for their release. "My heart in hiding" is a metaphor for the repressed projection of lust, metaphorised in the kestral-- 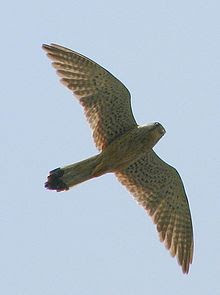 --whose grace and control in flight are among the natural world's most impressive sights. I remember thinking when I first read the poem, that the concluding image--"Fall, gall themselves, and gash gold-vermillion" must refer, if only tangentially, to the hawk's ripping apart its bleeding prey, the poem's glory a sort of sadistic celebration of carnal indulgence. Today, nearly fifty years later, that seems to me a completely sensible reading of at least part of the poem's ultimate deeper meaning. The religious life--particularly the "Jesuitical" version, of discipline, of a rejection of "worldly" pleasures--of the body's mortal splendors and attractions--seems antithetical to the aesthetic life, in which direct physical experience provides the key touchstones of knowledge, the raw matter, the subject and means of expressing truth in media. The tradition of the sublimation of the sensual life inside the cast of religious devotion, is a record of the suspension of the normal human animus, within a set/ting of limited permissions. One senses that the pressure of that self-denial is the force that drives Hopkins's poetic daemon. 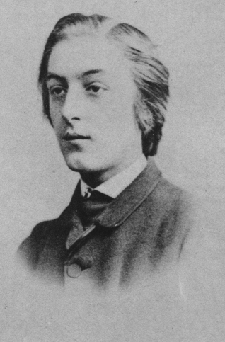 Religious poetry may be successful to the degree that it describes and glories in--while resisting--the very stuff of mortal temptation and indulgence, while hewing to the doctrines of aspiration to higher levels of attainment. That kind of discourse doesn't much divert philosophical thinking anymore, since our attentions now are focused on the practical questions of supply and demand, of accommodating the quotidian needs of the material world. Also, we're more comfortable with unresolved dilemmas than earlier cultures were, content to orbit within a dynamic universe of limitless contradictions, and permanent tension. Perhaps it is that quality that appeals to us in the work of Hopkins. Though in the sestet of The Windhover, he reasserts his confident acceptance in--even happily celebrates--the dogma of church precept ("a billion times told lovelier"), the world he describes has a terrible, even terrifying, rawness and power, neither comforting nor reassuring. The windhover's world is one of killing and consumption, along the cruel food chain of existence, its beauty the demonstration of the necessity of survival in a hostile environment. If this universe is God's doing, the harshness of the choices and requirements it sets out, does not allow for any easy investments in mild belief.
If we carry the modern idea of suppressed psychological urges to a limit, one could well describe the poem's subtext as a masturbatory rehearsal, starting with the evocation of a love-object, the "Brute beauty and valour and act,"--reaching a crescendo--"oh, air, pride, plume, here" in the orgiastic build-up, climaxing in the double-loaded term "Buckle!"--which suggests both a joining, a fastening--and a submission, a capitulation to a physical release, with "the fire that breaks from thee" both an ethically holy gushing "a billion times...lovelier" but also, crucially, "more dangerous"--signifying both the terrifying "danger" of forbidden sexual proclivities, but also consequences more exciting, daring, and irresistible to the poet.
Though the dedication to the poem is explicit, without it there is no explicit content in the poem which would suggest that it's a religious performance. The "chevalier" would refer simply to the kestral, not to any personification of the deity. The "sheer plod" has always seemed to me contradictory: If worship and adherence to a code of devout behavior is merely a plodding duty, what part can it play in the drama and inspiration of a life sensitive to the wonders of a fallen world? These are questions for which the church in Hopkins's time had no convenient or ready answers. He would live out his life in frustrated retreat from his greatest joys, dying at age 44 of typhoid, after years of suffering from ill health and chronic depression, his great love, to fellow undergraduate Digby Mackworth Dolben, going apparently unconsummated, Digby dying, at age 19, by drowning. Hopkins was only able to realize his identity through the medium of poetry, an act that suggests to us a failure of life and opportunity. But the Victorians tended to view rejection, denial, and withholding as probable sources of mellifluous feeling, valuable and fascinating in themselves, the fluids from which great things can be made. Hopkins probably regarded his regrets and lost loves as precious, luminous inspirations. Certainly, his privations and sacrifices made his poems more interesting, more enjambed, more full of longing and vicarious intensity and savory delight.
The clotted, hothouse claustrophic containment of Hopkins's poems makes me slightly uncomfortable, though I invariably stand in awe of his energetic outpourings of tamed wildness. Their effects sound excessive and even adolescent at times, but they're honestly offered, and innocently achieved. Like many charming kinds of verse, they seem most apprehensible and attractive to the young, and poems which appeal to us in our youth, have great resources of staying power, over time. Hopkins's poetry is likely to stand the test of time, despite its excesses and inner contradictions.
The Windhover
To Christ our Lord

--from Poems. First published 1918, edited with notes by Robert Bridges.

Posted by Curtis Faville at 2:40 PM

The "chevalier" would refer simply to the kestral, not to any personification of the deity

Kestrel, I believe--a species of falcon. Quite sublime birds--you see a few out in great valley this time of the year, along with the redtails and other smaller birds of prey--harrier hawks, or the light-colored Swainson hawks, owls. Also in desert (Im pretty sure they're swainsons...any amateur ornithologists know?). The ravens have a fit when the whitehawks arrive.

Though American Kestrels aren't the Euro/UK, AKAIK. Sort of multi-colored--vermillion, but also some scarlet, tan, etc.

Hopkins. eh. Interesting language, but sort of preccious, isn't it Sir F? It's like some of us would rather hear King Oliver in synchrony than stalinist pretty boys playing Rachaman-inoff

Hopkins is interesting because of his aesthetic, and because of his revolutionary prosodic experiments. His poems have a romantic appeal to the young, a point I mention. This is an encouraging sign. It may be possible to outgrow certain poets, or poems, but there's always a new generation coming up, a new audience for them.

thank you for this wonderful post on Hopkins, a poet whose writings had almost the status of 'scripture' when I was a young student.

Here's real language experimentation and the loveliest spirituality to accompany it. What a shame poets can't combine both anymore. Perhaps American Frank Samperi and Canada's April Bulmer are among the few who've tried.

Serio is that like great lituh-rary product Sir F? Poet imnot but I doubt Wordsworth Coleridge would think it so, tho perhaps it's superior (a form a sorts) to the usual beatnik squiggles or buddhistic bullcrap.

Bad poets, trad. or beat, sink into perdido, IMHE (along with talent nite frauds of all sorts, ie Dylans) Annie Waldman and her putos--stuffed into Hades.

I never really thought about poetry at all until I took part in a Finnegan's Wake reading group. You have to have an ear to read the Wake. I remember an engineering student in that group who was just astonished that there were people who could read it out loud. It's not just readable, it's incredibly lyrical if you have an ear. If you don't, it's indecipherable. "Begin again to make sound/sense and sense/sound kin again." The Windhover is a very visual poem, but its effects are primarily auditory. It's like Swinburne, mostly music.